India vs New Zealand, World Test Championship (WTC) Final Live Updates: Virat Kohli and Vice Captain Ajinkya Rahane has combined well to steer India clear after some hiccups. The partnership is looking solid when the Tea was called due to bad light.

And it's stumps. The umpires have decided that light isn't going to get any better for play. A start-stop day at the Ageas Bowl, and India end with 146 for 3. Captain Virat Kohli and deputy Ajinkya Rahane in the middle. India have done well today - tough batting conditions against top class bowling, with frequent interruptions. Tomorrow will be another tough day, weather permitting.

The umpires are out to have a look at the conditions. A decision soon?

Nothing much to update. The pitch and the run up area is under covers. Will we get any further play today? Might not. But switch to the women's game, some good action there as India Women look to save the game.

The light hasn't been great, and to make it worse, the covers are coming on. Expect a bigger delay.

India Vs New Zealand: WTC final - India 146 for 3. Bad light stops play yet again. It's been that kind of a day. The fans in the stadium are not impressed, but the players are walking off. Virat Kohli and Ajinkya Rahane have done well to stay there.

India Vs New Zealand: WTC final - India 138 for 3. Batting is very difficult in these circumstances. Constant disruptions, overcast conditions and tremendous bowling. But Kohli and Rahane are doing well. Their partnership is over 50.

The covers are coming off. Virat Kohli has worn his helmet and gloves, and is ready to go in. Play should resume shortly.

India Vs New Zealand: WTC final - India 134 for 3. Bad light stops play again. And what's more, the covers are coming on. We could be in for quite a lengthy break now.

India Vs New Zealand: WTC final - India 134 for 3. Bad light stops play again. The players walk off as the umpires check for light. Frustrating period, this. But little can be done. Virat Kohli and Ajinkya Rahane are doing well against top quality bowling, especially from Tim Southee.

Ind Vs NZ: WTC Final live score: India 120-3: That would be Tea. Bad light has stopped play and umpires have taken an early Tea as it was just 15 mins away. Meanwhile good session for India. Lost Pujara but captain Virat Kohli and vice captain Ajinkya Rahane showed gumption as they made sure they stay put. Southee has been the peak of the bowlers with his banana swing. Catch all the action after Tea with us.

Ind Vs NZ: WTC Final live score: India 118-3: This partnership between Virat Kohli and Ajinkya Rahane is now 30 runs. Good solid recovery from India here. It has not been easy for the batters at Southampton. It was overcast, the ball was moving around but here we are..two solid middle-order batsmen doing their very best. Tea is not long and India would like not to lose any more wickets.

Ind Vs NZ: WTC Final live score: India 106-3: India have been steady, but they have been painfully slow. The run rate is just 1.50. The conditions were testing and Kiwi line up has managed to seam it around. But the plan from India is to survive the difficult path and then go for the kill. So that's what's happening now. Kohli has been beaten on a lot of occasion by Tim Southee. He is bowling really well.

Third umpire was right to use the Ultraedge as per the protocols. There was confusion caused because it wasn't clear what the original on-field decision was. It seemed as if NZ wanted to take a review https://t.co/VT3ut6zBj6

Ind Vs NZ: WTC Final live score: India 95-3. So the Trent Boult-Kyle Jamieson pair doing the trick for NZ. Pujara departs and then almost the very next ball it looked like Kohli will be given out but he wasn't. Interestingly Kiwis didn't review it, but the umpire did. And this has created a furor in social media. Fans are asking whether umpire Richard Illingworth had the right to review it on his own.

Great comeback from the Kiwis.

An eventful Boult over! Pujara out LBW for 8 then a catch down leg off Kohli refered upstairs by the Umpires. Kohli remains 17* with Rahane 3*. Follow play LIVE in NZ with @skysportnz. Card | https://t.co/9M1mvODiZ3 #WTC21 pic.twitter.com/8RQbQpR4mo

India Vs New Zealand live score: WTC Final - India 88-3. WICKET! What a delivery from Trent Boult. Late in swing and Pujara perishes. Wanted to block it but this was a fantastic delivery. Pujara had no idea and he has been given the marching orders. Will he reveiw this one...umm no. Kohli's advice it seems.

India Vs New Zealand live score: WTC Final - India 87-2. Finally a change in bowling attack as Kyle Jamieson has been brought in. Lanky pacer can extract sharp bounce here. Fans are really looking forward to a battle between Kohli and him.

India Vs New Zealand live score: WTC Final - India 78-2. Neil Wagner is turning the heat on. Pujara has been peppered with short ball. But being the man he is, he has copped up all the blows except this one where he was hit on the helmet by a bouncer. The physio has been called in; he seems fine though.

A couple of boundaries for Pujara. India 78/2.

After 35 balls without scoring - absorbing pressure with his solid defence, Pujara latches on a hint of width and gets off the mark with a cut four. We did warn you…#INDvNZ #WTC21 pic.twitter.com/puNTf2256x

Ind Vs NZ: WTC Final live score: India 70-2. What a ball to end the over. Absolute peach of a ball. Almost squared up Virat Kohli who looked vulnurable to say the least. NZ appealed for caught behind..but it was not out. Banana swing!

Ind Vs NZ: WTC Final live score: India 69-2. That was a maiden to start the proceedings after Lunch. Wagner as willy as ever. Bowled wide of off stump. sometime kept it short, but mostly invited the batter to reach out. No, Kohli wasn't interested.

Meanwhile in another corner of England.

A resolute half-century for @Deepti_Sharma06 on debut! 👏👏

A fine effort from the #TeamIndia all-rounder! 👍👍 #ENGvIND

India Vs New Zealand live score: WTC Final - India 69-2. LUNCH: We are moments away from the post-Lunch session. Kohli and Pujara, two world class batsaman will have their task cut out. Can give anything away to NZ seamers.

What a shot this was

India Vs New Zealand live score: WTC Final - India 69-2. LUNCH: Cheteshwar Pujara yet to get off the mark after facing 24 balls. Virat Kohli looking good in his short stay. The first session ends with both teams having their moments. Shubman Gill and Rohit Sharma added 62 for the first wicket before both fell in quick succession, slowing down the run rate as well. Top battle, this.

Ind Vs NZ live score: WTC Final - India 63-1. Cheteshwar Pujara settling in, taking his time as always. Shubman Gill going well at the other end too. A quiet passage of play after Rohit's exit.

India Vs New Zealand: WTC Final live score: India 62-1. WICKET - Rohit Sharma c Tim Southee b Kyle Jamieson 34. Full and swinging away, Rohit looks to defend and gets a thick edge, caught well at third slip by Southee diving across to his right. Just the wicket NZ needed, but a good opening stand from Rohit and Gill 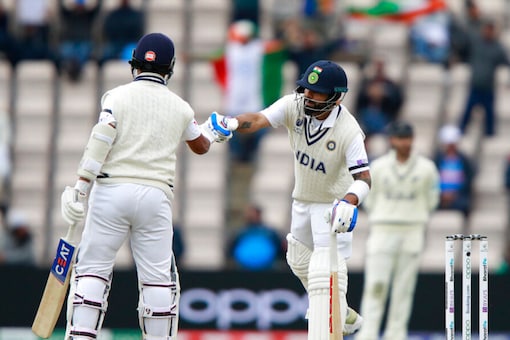 India vs New Zealand Live Score Day 2, Ind vs NZ WTC Final Latest Updates:And it’s stumps. The umpires have decided that light isn’t going to get any better for play. A start-stop day at the Ageas Bowl, and India end with 146 for 3. Captain Virat Kohli and deputy Ajinkya Rahane in the middle. India have done well today – tough batting conditions against top class bowling, with frequent interruptions. Tomorrow will be another tough day, weather permitting.

India were the number one team in the WTC table and not only dominated at home but also won big overseas series in this time-frame – their triumph in Australia in 2020-21 the biggest win of them all. India won 5 and lost just one of the six series they played in the inaugural WTC but significantly the one loss came at the hands of New Zealand in what was a 2-0 drubbing at home. Rohit Sharma and Cheteshwar Pujara will be the key in the Indian batting line-up. A solid start at the top of the order is essential for success in England and Rohit – the best opener in the WTC in the world – will have to adapt to the conditions quickly and negotiate the new ball for India. It will mean a departure from his usual attacking self in India and he would have to leave a number of deliveries outside the off stump in order to succeed in England

New Zealand have had a great run in Test cricket since losing to South Africa at home in 2017. Kane Williamson has led the team with aplomb whose success has majorly been built around the phenomenal results achieved at home during the last two to three years.

New Zealand has tasted more success in England on their last two tours as compared to India – and this is where they have an advantage over their fancied rivals. They won the two-match series against a depleted England XI last week and drew the series in 2015. The conditions are expected to be cold and overcast with a lot of rain around the area and this is where the likes of Tim Southee and Trent Boult – the two swing bowlers in the New Zealand XI have the potential to run through the Indian line-up.

New Zealand also got invaluable match time before the mega final playing the two-Test series against England whereas India had to be content with intra-squad practice games.

Mohammed Shami had a decent England tour in 2018 and was unplayable on occasions especially at The Oval. A fuller length and line between the third and fourth stump and Shami might just run through the New Zealand line-up in favourable conditions in Southampton.