Back to News18
Home » Cricket Home » News » India vs New Zealand, 2nd T20I Match at Auckland Highlights: As it Happened

India vs New Zealand, 2nd T20I Match at Auckland Highlights: As it Happened

INDIA WIN: Dube pulls one out of the park, and India win by 7 wickets. A comprehensive win this by Kohli and boys. KL Rahul remains unbeaten on 57.

OUT: Iyer makes look power-hitting easy. He gets underneath one from Sodhi and dispatches the ball into the stands. But in the same over he edges one and Southee takes an excellent catch. He goes for 44 as India are 125/3.

FIFTY: Now Bennett comes back for an over. Indians are still finding it hard to score freely. Rahul edges one and the ball flies for a six over third man. The following ball he slams the ball over covers for a four to bring up his fifty. India are 98/2.

Tickner comes back into the attack. A confusion between Iyer and Rahul meant that both of them were out of the crease, but still managed to survive. After 14 overs the score now moves to 87/2.

SIX: Just when it looked like Kiwi bowlers had successfully managed to put a check on the run rate, Iyer smashes one from Sodhi into the stands. After 12 overs India are 76/2.

Ish Sodhi continues. He is bowling better than what he was bowling in the previous match. A good over comes to an end as India move to 60/2 in 10 overs.

Spinners from both ends is good news for the Indians. Iyer and Rahul like to take the attack to the spinners and score quickly. Meanwhile, India have brought up their 50. It's 51/2.

OUT: Southee sways down the leg and Kohli manages to edge it. Seifert takes a good catch to remove the Indian skipper. Kohli is out for 11 as India are 39/2.

SIX, FOUR: Tickner comes into the attack, and he too is greeted with a four by Kohli. Then Rahul follows it up with a six over third man. He has been sensational till now. After 5 overs India are 39/1.

FOUR: Rahul has been in excellent form lately and is continuing with the show here too. He glances Bennett for a four. There is no hurry to score the runs and both the batsmen can take it easy at the moment. After 4 overs India are 24/1.

Hamish Bennett comes on for the second over and he only gives away five runs. That's a good start for the Kiwis as India are now 13/1 in 2 overs.

OUT: We are back for the second innings, and India just need 133 runs to win. Rohit Sharma and KL Rahul open the innings while Southee comes for the first over. And Rohit starts with a four through the covers. And Kiwis have a wicket. The ball moves away from Rohit and he edges it straight to the slip fielder. India are 8/1 after 1 over.

Seifert manages to get a six on the fifth ball of the final over but only a single comes off the final ball and New Zealand have to settle for 132-5. Nowhere near an ideal total and the Indian bowlers have done very well to restrict them to this much. Now the batsmen must come out and score the runs.

Shami bowls the penultimate over and only concedes five runs. The scoreboard pressure gets to Taylor too as he holes out to Rohit in the deep, with Bumrah getting the wicket. NZ have really struggled.

Bumrah's back into the attack and he should have had a wicket but for a regulation catch dropped by... Kohli?! Yes, the Indian skipper gets a simple catch at long-on but drops it, probably in part due to the lights getting in his eyes. Bumrah mostly used the slower ball, making it harder for the batsmen to score.

Jadeja's final over is an eventful one. Starts off with a wide that the bowler didn't look convinced with the call and that is followed by a stumping appeal which Seifert survives. Another wide comes at the end of the over. Despite that, only 6 runs come off the over which is pretty good for a death over.

Jadeja continues to impress as his third over goes for just 4 runs. He's had some showing at Eden Park today. Chahal too continues to ramp up the pressure but Seifert manages to finally get a boundary after 41 balls before hitting a six straight down the ground. New Zealand need much more of these!

Boundaries have dried up for the hosts. Can they get a big finish?

At this stage match firmly in India's control. New Zealand need a big finish to be competitive. 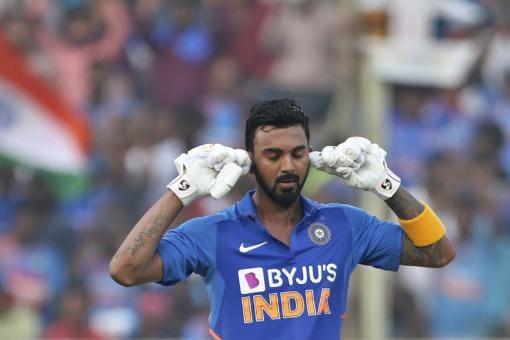 IND v NZ 2nd T20I latest update:INDIA WIN: Dube pulls one out of the park, and India win by 7 wickets. A comprehensive win this by Kohli and boys. KL Rahul remains unbeaten on 57.

Preview: "It's definitely getting closer and closer to landing at the stadium and playing straight. That's how compressed the game has become."

This is how Virat Kohli described the cramped cricket calendar ahead of the first T20I against New Zealand in Auckland on Friday. Just five days earlier, India had taken on Australia in Bangalore.

The schedule only gets tougher with the second T20I on Sunday at the same venue, with just one day break in between. India are leading the five-match series after a six-wicket win in the first game, which gave them more reason to take a much-needed off-day on Saturday.

India would know what to expect on Sunday - another tough day for the bowlers, with batsmen set to make merry. Even 203 that New Zealand posted wasn't enough, as India chased it down with an over to spare. The Eden Park is known for small boundaries, and the flat pitch made life even easier for the batsmen.

India will be pleased with Friday's win, not just because of the result but because it gave pointers towards the future. India played KL Rahul as the wicketkeeper dropping Rishabh Pant, and he made a half-century. Shreyas Iyer's unbeaten 29-ball 58 would have pleased India even more, as it finished the game. India will now believe they have some good options for the middle order in a finishing role - something they've missed in recent times.

Rahul and Iyer's forms will ease pressure off Virat Kohli and Rohit Sharma, allowing them to play with more freedom at the top.

India's bowlers would have realised the ideal length for Eden Park wicket. Shardul Thakur and Mohammed Shami were expensive, bowling either too short or too full. Yuzvendra Chahal and Jasprit Bumrah bowled relatively tighter, 'restricting' New Zealand to 203. That the target was gettable with an over to spare tells a lot about the conditions.

Bumrah had twisted his ankle in his final over on Friday and received on-field treatment immediately. However, he was able to bowl out the remaining four deliveries, which are positive signs for the visitors. India are expected to retain the same XI unless they are forced to make a change.

New Zealand's bowling department struggled in the absence of the injured duo of Trent Boult and Lockie Ferguson. Tim Southee wasn't quite at his best as he went wicketless in his four-over spell and conceded 48 runs. New Zealand's fielding was not at its best too, although Martin Guptill and Southee took a couple of good catches in the deep. Ish Sodhi dropped Kohli while Rahul survived a simple run out opportunity, which cost New Zealand the game.

Their batters, Colin Munro, Kane Williamson, Ross Taylor all scored half-centuries. Their bowlers will have to step up though, for another tough game awaits.