India vs New Zealand live cricket score and latest updates of 3rd T20I at News18.com. Stay with CricketNext for live score and ball by ball commentary of Ind vs NZ cricket match at Hamilton.

First two balls get three runs for India. The third ball, Kohli sweeps the ball for a four. India are still in hunt. On the fifth ball, Rohit clears his front leg and dispatches the ball for a six. And Rohit finishes it off with a six. India win the super over.

So Kohli and Rohit are the ones to come out in the middle. This is an uphill task that they face. Southee will bowl the last over of the match.

Two runs in first two balls, this is an excellent start for Bumrah. But the third ball, Williamson glances the ball for a six. He follows it up with a four too. Guptill ends the over with a four. India need 18 runs to win.

So it's super over time now and Kiwis will bat first. Williamson and Guptill have come out to bat. Bumrah takes the ball.

TIE: The first ball of the over and Taylor hits it for a six. The equation comes down to 3 from 5. And there's a twist in the tale. Shami has Williamson caught behind for 95. And the match heads into a super over.

Bumrah hasn't been at his best today and has been leaking boundaries. Meanwhile, Williamson is also getting closer to his ton. Kiwis need 9 runs from 6 balls now.

FOUR: Three consecutive fours off Bumrah here for Williamson and he is taking his team home single-handedly. What a performance this has been from him. After 17 overs it's 151/4.

OUT: Williamson here is going great guns and getting boundaries at will. This is exceptional from the Kiwi skipper. A slow one from Thakur gets the wicket of de Grandhomme. After 16 overs the score has moved to 137/4.

FIFTY: A six and a four in Shami over means that Williamson brings up yet another fifty in T20Is, his 11th. He has given great boost to this team. Kiwis are 114/3 in 14 overs.

Chahal is bowling well here and creating a lot of problems for both the batsmen. Rahul has been keeping well to him as well. Kiwis, for now are in trouble. It's 100/3 after 13 overs.

OUT: Chahal bowls an excellent delivery that goes through the gate, and Santner is castled. He goes for 9 as New Zealand are 88/3 now.  A much-needed wicket here for the Indians.

Jadeja fires in a trademark economical second over, giving away just 5 runs. Bumrah, who was surprisingly hit for two sixes in his first over, then comes for his second over. He could have had a wicket too, as Santner edged one that flew high but Jadeja misjudged the catch running backwards and puts it down. To add insult to injury, Williamson takes four runs off him on the very next ball. Oops.

FOUR AND SIX! Shivam Dube's first over is one to forget. Mitchell Santner first slams him for a boundary towards square on the leg-side before Williamson hoicks one all the way over the fine leg boundary.

OUT! Ravindra Jadeja strikes with his second ball but this was poor batting from Munro. Charged down the wicket to a ball that was flat and fast, it evaded him and Rahul does the rest behind the stumps.

Guptill has been in a punishing mood so far but his aggression proves to be his undoing. Hits a four off Shardul with a pull but slashes hard at a short and wide ball and only finds sub fielder Sanju Samson at deep point!

Yuzvendra Chahal is brought in to bowl the final over of the powerplay and starts by conceding a boundary to Munro. He beats him all ends up on the next ball. Guptill then gets a boundary in the third man region by slashing at one slighty outside off and evades Kohli at first slip. Expensive start for the leggie.

FOUR! Munro gets in on the act now, slashing hard at one that is slightly outside off from Shami. Not in control of the shot but it flies over short third man and runs away for four. Shami ends the over by getting a bouncer to hit Munro in the ribs, leaving the opener on the ground in some pain.

TWO SIXES! Guptill slashes hard at one that flies down towards the third man area and just evades Shami and goes over the ropes. Jasprit Bumrah, who is bowling his first over, looked exasperated at the drop but it was a tough chance for sure. Guptill follows that with a ramp shot that flies the distance.

Mohammed Shami shares the new ball with Thakur and his first over is a decent one that goes for just five runs, all of them singles. India will need more such overs and a few early wickets.

SIX! Guptill takes no time to settle, taking just the one ball before going hard. He slams one straight over the bowler's head that comfortably clears the ropes. 8 runs come off the over. Good start for the hosts. 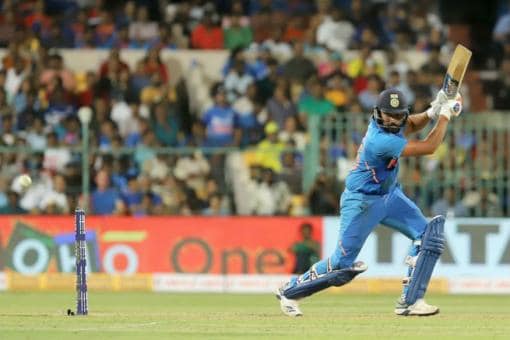 India vs New Zealand 3rd T20I latest update:First two balls get three runs for India. The third ball, Kohli sweeps the ball for a four. India are still in hunt. On the fifth ball, Rohit clears his front leg and dispatches the ball for a six. And Rohit finishes it off with a six. India win the super over.

Preview: To back up the talk about only focusing on the game, Virat Kohli and India produced emphatic performances in Auckland which has brought them to within touching distance of a first T20I series win in New Zealand. India lost 0-2 (2008/09) and 1-2 last year in their previous attempts. India, who have identified their core players for the format ahead of the T20 World Cup, are unlikely to shuffle the pack too much on Wednesday as they look to complete a third consecutive win in Hamilton on Wednesday. Alongside Rohit Sharma, who’s had tough return from a break, the second opener’s slot and the number 4 were areas India needed solutions for at the start of the series. But the performances of KL Rahul and Shreyas Iyer in the first two games would have gone a long way in the matter. Manish Pandey alongside Ravindra Jadeja have also been sharp in the field, helping India make it tougher for the opposition.

On Tuesday, there was an optional practice session with skipper Virat Kohli, KL Rahul, Yuzvendra Chahal, Mohammed Shami and Jasprit Bumrah, the ones missing in action. The support staff worked closely with those players who haven't yet received a chance to play in the series yet. Ravi Shastri paid close attention to Washington Sundar, while batting coach Vikram Rathour was busy with Rishabh Pant. Both are expected to sit out again on Wednesday. Kohli, who had a rare failure with the bat in the second T20I, will hope that his side can retain the intensity with both bat and ball in Hamilton against the hosts, who have at times looked short of ideas, especially in the second T20I. Kane Williamson’s captaincy is on the line and he not only has a depleted bowling attack to worry about but also how they will counter Jasprit Bumrah. The Indian pacer, who is back bowling at full throttle, has returned with figures of 1/31 and 1/21 in the first two games and has been the toughest to score off.

The focus for the Kiwis will be on Colin de Grandhomme as well to make an impression after two forgettable days playing as a batsman only. The all-rounder will be replaced in the squad for the last two T20Is by batsman Tom Bruce. Grandhomme has played strictly as a batsman so far in this series, and has scores of 0 and 3 in the first two games. The likes of Colin Munro, Martin Guptill and Ross Taylor will need to step up and so will the fielding which has been poor from the hosts’ point of view. New Zealand have had a poor run at Eden Park off late, but their record at Seddon Park holds them in good stead. They have won seven out of nine T20Is played here, and will be hoping to stop India from taking an unassailable lead in the series.