DAY 1 CALLED OFF: And here's the news from the centre. The play has been called off without a ball being bowled as it has started to rain again in Southampton. Do join us tomorrow for the match at 3 pm IST.

India’s success story in international cricket under the captaincy of Kohli has been scripted, more often than not, by this combination. It is, thus, inevitable that the team has picked its best five bowlers in a match as crucial as the WTC final. The Ageas Bowl strip is expected to be pacy, with bounce and carry, which will predominantly help fast bowlers. Overcast conditions and a forecast of rain over the weekend in Southampton will only make conditions more suitable for pace bowling.

While other than the first-choice bowlers – pacers Ishant Sharma, Mohammed Shami and Jasprit Bumrah and spinners Ravichandran Ashwin and Ravindra Jadeja – India played several others in the two series, it is these five who have been at the core of the attack over the past few years.

Meanwhile, Kohli and coach Ravi Shastri have realised that to win Test matches, especially in foreign conditions where the Indian batsmen may struggle, too, it is crucial to bowl out the opposition twice. The fact that the current bowling attack has managed to bowl out Australia and England 14 times in 16 innings over the eight Tests has only strengthened this theory.

There has been no rain for close to an hour, and so let's hope that the umpires will come out soon for the toss. Meanwhile there will be an inspection an hour later.

So finally some good news coming our way. The rain has stopped and the groundsmen are trying to dry out the playing area. Players are having a stroll in the field. Hopefully there'll be some play soon.

ICC World Test Championship final 2021, India vs New Zealand. Lunch time at Southampton. Should have been the end of session 1, but we got no play at all. We've got to wait and see if we can get any play in the day at all. Things are looking bleak at the moment. Similar situation for India Women at Bristol too, they've lost Smriti Mandhana following on.

There was some brief hope a while ago when rain stopped. But it's back on now. So the wait continues. Unlikely we'll get play anytime soon. Meanwhile, India women are following on. Shafali Verma and Smriti Mandhana batting again.

Nothing much to update for now. Southampton continues to stay wet. An agonising wait for cricket fans who have been looking forward to this game. Meanwhile, things are muc better in Bristol where India Women are 224 for 8 vs England Women.

I see India have been saved by the weather …. 😜 #WorldTestChampionship

Looks like Dinesh Karthik has become the weather reporter for this game! Here's meme man Wasim Jaffer yet again

An update from Southampton, but not a positive one. Here's Dinesh Karthik:

To all those in India googling about weather, it's still windy and pouring in here.
Rain Gods are not in mood to miss the first day!#WTCFinal pic.twitter.com/1c3befwAPT

India vs New Zealand, World Test Championship (WTC) Final Latest Updates: Well, there is not much updates for you guys for now. so, here's something to gorge on. Will The 2018 Virat Kohli Turn Up In Southampton Or Will The Slump Continue? Asks our columnist Vimal Kumar Kumar. CLICK HERE TO READ FULL ARTICLE 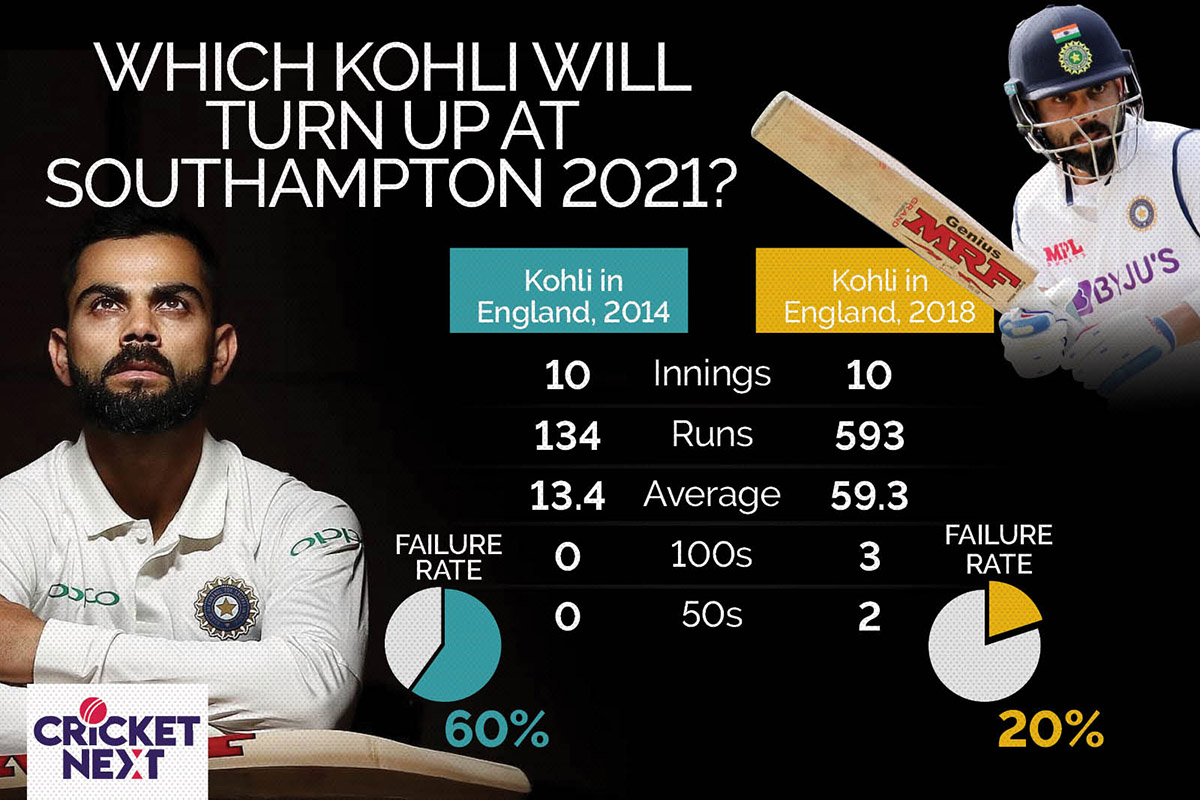 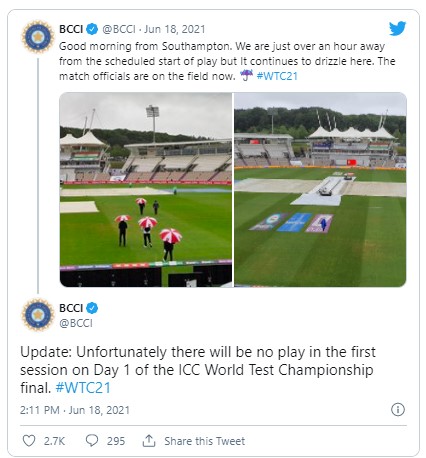 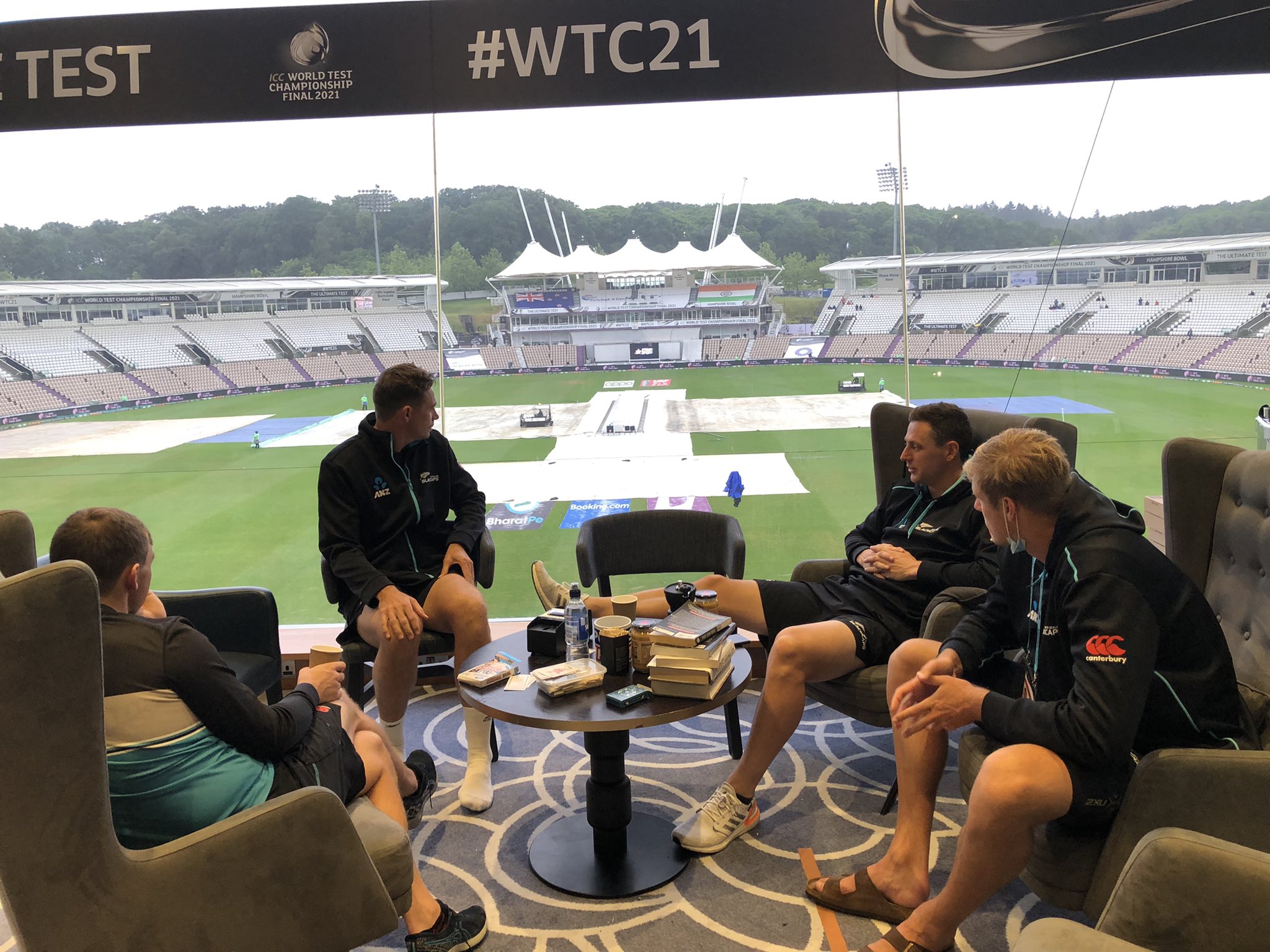 First visuals from the BCCI and it is not a promising sight. The pitch is covered and the officials are out inspecting the strip with umbrellas. Fingers crossed!!!

Southampton Weather Today, India vs New Zealand, World Test Championship (WTC) Final Latest Updates: The overcast conditions could very well play in to the hands of New Zealand, who are yet to name their final 11. They may go with all-pae attack. India have already named their 11 with Jadeja and Ashwin as spinners. Did India err in their selection and have NZ gained an upperhand even before the start, by not revealing their hand? Only time will tell.

Not the kind of wholesome social media content you come to expect from the WAGs of Indian cricketers. But, hey from Prithi Narayananm it's authetic as it can get from Southampton, We are in for a loooooooong day folks! stay strong 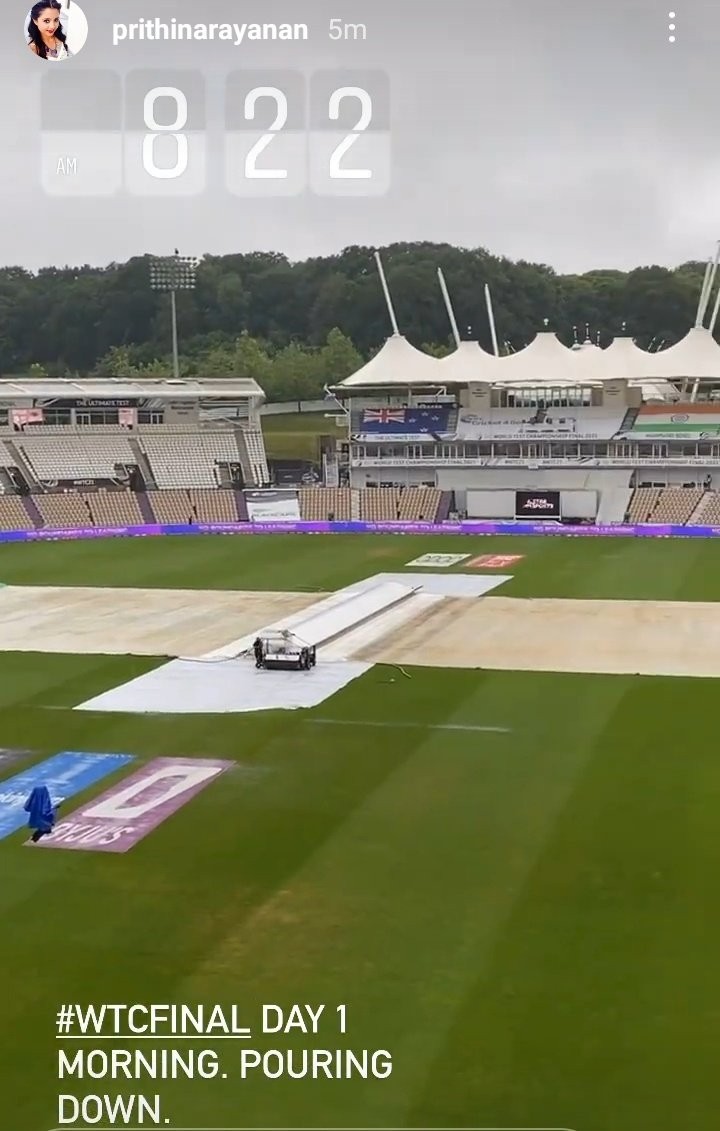 Hello and welcome to our live blog of day one of the World Test Championship between India and New Zealand at the Hampshire Bowl, Southampton. It was to a 3:00 PM IST start, but we start off with some bad news folks. It has been raining in Southampton through the night and the start of play will not only be delayed, but it is likely that the first session may be a complete whitewash 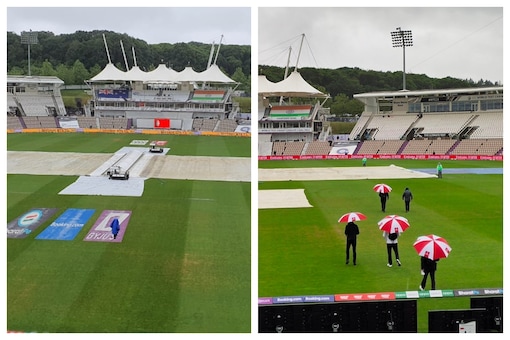 India vs New Zealand Live Score, Ind vs NZ WTC Final Latest Updates: And finally after a long wait, the match has been suspended for the day due to inclement weather. While the umpires were to inspect the playing conditions at 7.30 IST, it started raining again before that.

India were the number one team in the WTC table and not only dominated at home but also won big overseas series in this time-frame – their triumph in Australia in 2020-21 the biggest win of them all. India won 5 and lost just one of the six series they played in the inaugural WTC but significantly the one loss came at the hands of New Zealand in what was a 2-0 drubbing at home. Rohit Sharma and Cheteshwar Pujara will be the key in the Indian batting line-up. A solid start at the top of the order is essential for success in England and Rohit – the best opener in the WTC in the world – will have to adapt to the conditions quickly and negotiate the new ball for India. It will mean a departure from his usual attacking self in India and he would have to leave a number of deliveries outside the off stump in order to succeed in England

New Zealand have had a great run in Test cricket since losing to South Africa at home in 2017. Kane Williamson has led the team with aplomb whose success has majorly been built around the phenomenal results achieved at home during the last two to three years.

New Zealand has tasted more success in England on their last two tours as compared to India – and this is where they have an advantage over their fancied rivals. They won the two-match series against a depleted England XI last week and drew the series in 2015. The conditions are expected to be cold and overcast with a lot of rain around the area and this is where the likes of Tim Southee and Trent Boult – the two swing bowlers in the New Zealand XI have the potential to run through the Indian line-up.

New Zealand also got invaluable match time before the mega final playing the two-Test series against England whereas India had to be content with intra-squad practice games.

Mohammed Shami had a decent England tour in 2018 and was unplayable on occasions especially at The Oval. A fuller length and line between the third and fourth stump and Shami might just run through the New Zealand line-up in favourable conditions in Southampton.