New Zealand has been a tough touring destination for India. The visitors have won just two of the 10 series they have played in the country.

New Zealand has been a tough touring destination for India. The visitors have won just two of the 10 series (8 bilateral, one tri-series and one multi-nation tournament) they have played in the country.

Overall, India has played 47 ODIs in New Zealand and won just 18. The win-loss ratio of 0.692 is their worst in any country – that is how difficult it has been for India in New Zealand. Bishan Bedi led India in their first ODI series in New Zealand in 1976. India played their first match in Christchurch on February 21 and could only muster 154 in a 35-overs affair (8 balls an over) with Gundappa Viswanath registering fifty. The left-arm medium-fast bowler, Richard Collinge bagged a fifer before Glenn Turner anchored the hosts to a comprehensive nine-wicket win. The home team went on to win the next match at Auckland to take the series 2-0.

India’s batting again let them down in 1981 as they went down 0-2. Despite some good individual performances from Kapil Dev and Dilip Vengsarkar, India had not yet formed into a world beating unit in the format. Yograj Singh did not play for India after this series.

India registered their first victory in New Zealand on the 6th of March, 1990 in the Rothmans Cup Triangular Series in Wellington. Sachin Tendulkar (36 off 39 balls) and Kapil Dev (46 in 38) stood out with the bat as the visitors posted 221 against a Martin Crowe led New Zealand XI. Kapil, along with Manoj Prabhakar and Atul Wassan then got rid of the dangerous trio of Mark Greatbatch, Ken Rutherford and Richard Hadlee to hand India a nail-biting victory by a solitary run.

Greatbatch smashed 73 off 77 deliveries in Dunedin in the 1992 World Cup helping New Zealand chase down India’s 230 for 6 by 4 wickets and almost three overs to spare. Tendulkar top-scored in the match with 84 off 107 deliveries. TENDULKAR - THE OPENER IS BORN

March 27, 1994, Auckland: India lost the series opener in Napier. In the second ODI at Eden Park, Kapil Dev, Ankola and Javagal Srinath bowled out the hosts for 142. India sent in a new opening batsman. He produced one of the most exhilarating knocks witnessed in ODI cricket shredding the Kiwi attack to pieces. His 82 of 49 deliveries which included 15 fours and 2 sixes was the fifth-highest batting strike rate innings of above 75 in the history of ODI cricket till then. He showed a glimpse of his true batting genius in 50-overs cricket. India chased down the target within 24 overs.

More importantly, Sachin Tendulkar was re-born – as an ODI opener.

The innings in Auckland changed Tendulkar’s career forever and he went on to become one of the greatest batsmen in ODI cricket history. It changed Indian cricket forever.

India went on to win the third ODI in Wellington before going down in Christchurch – the series ended in a 2-2 draw.

The 1999 series was again a 2-2 draw. Rahul Dravid was the highest scorer with 309 runs in 5 matches. Srinath was the leading wicket-taker with 9 wickets.

New Zealand thrashed India 5-2 in the 2002-03 series. Barring Virender Sehwag, who hit 299 runs in 7 matches, including 2 hundreds, all the other batsmen from both the teams failed in the series. Srinath, was again the leading wicket-taker of the series with 18 wickets at 11.16 apiece. India tasted their maiden series triumph in 2009 as they beat the hosts 3-1 in the five-match series. They registered the highest team total ever recorded in New Zealand – 392 for 4 – in the third ODI at Christchurch (it has been surpassed only by New Zealand against the West Indies in World Cup 2015). Tendulkar’s 163 was the highlight of the innings.

India captured the series in the 4th ODI at Hamilton when chasing 270, they amassed 201 for no loss in 23.3 overs before rain intervened. The visitors, well ahead on Duckworth-Lewis, romped home by 10 wickets. Sehwag remained unbeaten on 125 off just 74 deliveries after hammering a hundred in just 60 deliveries – it was the fastest hundred for India in ODI history and since then has been broken only by Kohli (52 balls against Australia in Jaipur in 2013).

Virat Kohli and MS Dhoni scored big and Mohammed Shami was the highest wicket-taker of the series in 2014 but the Brendon McCullum-led New Zealand side were too good for India and won the series 4-0.

However, India did compete in patches and the two countries played out a thrilling tie in the third ODI in Auckland. Chasing 314, India were struggling at 79 for 4 before Suresh Raina and Dhoni resurrected the innings. However, at 184 for 6, it looked all but sealed for the hosts. R Ashwin and Ravindra Jadeja staged a dramatic fightback and added 85 for the seventh-wicket. India needed 18 off the final over. Jadeja blasted Corey Anderson for two boundaries and a six but with two needed off the final delivery could only squeeze a single off the final ball– it was a tie. The left-hander remained unbeaten on 66 off 45 deliveries.

India outplayed the hosts on their last tour in 2019 beating them 4-1. Interestingly, it was Ambati Rayudu who was the top-scorer with 190 runs in the five matches in the series. Shami and Yuzvendra Chahal were the pick of the bowlers for India with 9 wickets each. 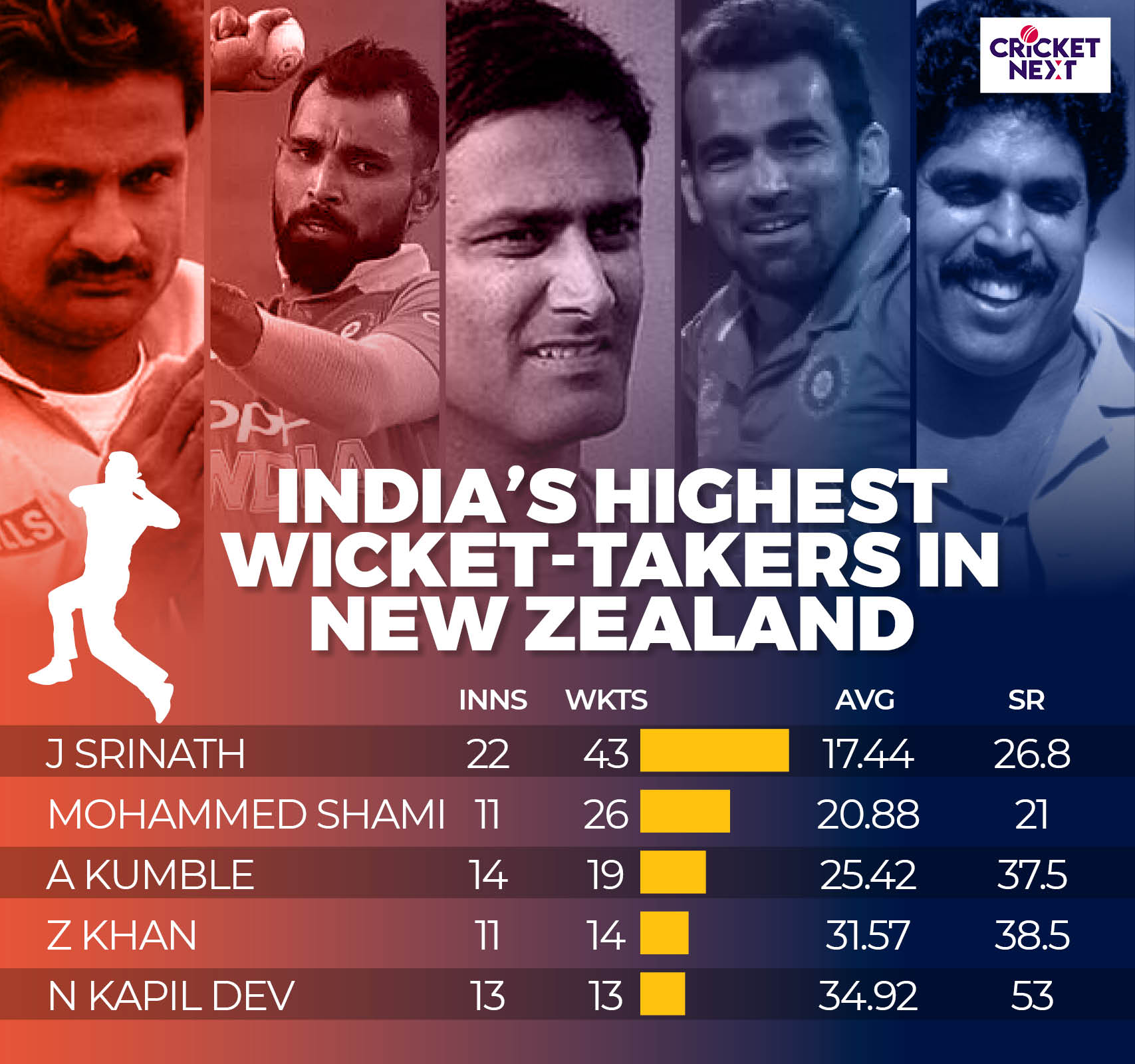 Lowest Team Score: 92 all out vs New Zealand in Hamilton in 2019

Dhoni was very consistent in New Zealand scoring 590 runs in 12 innings which included 6 fifties at a strike rate of 98.82