Back to News18
Home » Cricket Home » News » India vs Pakistan | In Numbers: Win Toss, Bowl First the Mantra for Manchester

India vs Pakistan | In Numbers: Win Toss, Bowl First the Mantra for Manchester

Old Trafford, in Manchester, is one of the oldest and most historic venues in cricket. From Jim Laker’s 19-90 against Australia in 1956 to Ian Botham’s heroics in the Ashes in 1981 – the venue has witnessed greatness and a lot of drama unfold within its boundaries. Old Trafford, in Manchester, is one of the oldest and most historic venues in cricket. From Jim Laker’s 19-90 against Australia in 1956 to Ian Botham’s heroics in the Ashes in 1981 – the venue has witnessed greatness and a lot of drama unfold within its boundaries.

Old Trafford hosted its first Test – between England and Australia – in 1884 and made its ODI debut, again featuring the same countries in 1972.

Since then it has hosted 47 ODIs, none more famous and electrifying than the 1999 World Cup clash between India and Pakistan, which the former won by 47 runs.

As India and Pakistan again look to clash in a pulsating encounter at Old Trafford on the 16th of June, Sunday, we look at the trends and patterns – both historic and recent that emerge from the venue and how that could affect team composition and strategy. Lose the Toss and Pray you Chase –The Success Mantra

Teams that have won the toss have won 19 matches (and lost 26) at the venue (one match has been abandoned and another called off due to rain).

So winning the toss is not an advantage at Old Trafford.

Teams have won the toss and elected to bat first 28 times of the 46 matches (where there was a toss) held at the venue, that is approximately 61% of the times.

But this hasn’t guaranteed success – they have gone on to win only 10 of these 28 matches. Teams that have won the toss and fielded have won 9 matches.

So if a team wins the toss it can decide to bat or bowl first – there is no real difference.

Overall, the team chasing has won on 27 occasions while the team batting first has won on 18 occasions. So, batting second is definitely an advantage.

India have been a great chasing side winning 16 of the 22 matches they have batted second since 2018. With rain around England and the possibility of a curtailed match with Duckworth-Lewis coming into the equation a realistic possibility, India would definitely want to chase at Old Trafford.

The best combination, interestingly, seems to be of losing the toss and being asked to field first. Teams that have lost the toss and chased have won as many as 18 matches at the venue.

The last three matches at the venue have followed this trend as well. 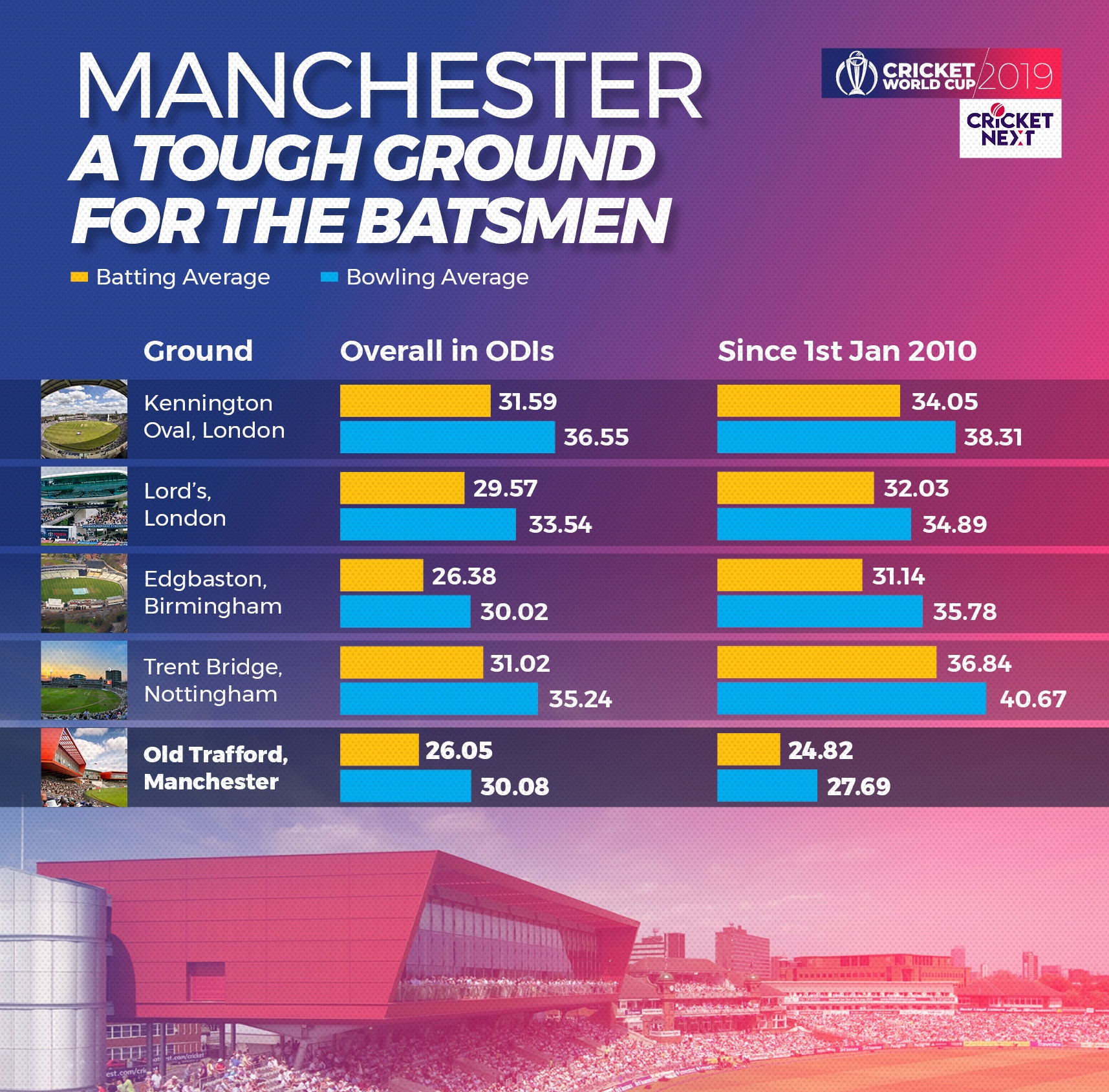 A Tough Ground for the Batsmen

The average score batting first at Old Trafford is 216. It has gone up to 256 in the nine ODIs played here since 2010.

The average score successfully chased at the venue is 190. Interestingly, this has gone down to 164 since 2010.

The batsmen have had a tough time at Old Trafford with the collective batting average a meagre 26.05 – the lowest for any major ground in England (min. 45 ODIs).

That trend can be seen in this decade also. Since January, 2010, the collective batting average at Old Trafford has gone down to 24.82 – which is considerably lower than the corresponding average of other major English venues.

In contrast, the bowling average at Old Trafford is just 27.69 – making it, by far, the toughest ground for batsmen in England. Both teams might want to strengthen their batting given the history of the venue and the current weather conditions prevailing in England.

India might go in with a technically sound Vijay Shankar at number 4 – he will also be an asset with the ball in seaming conditions. 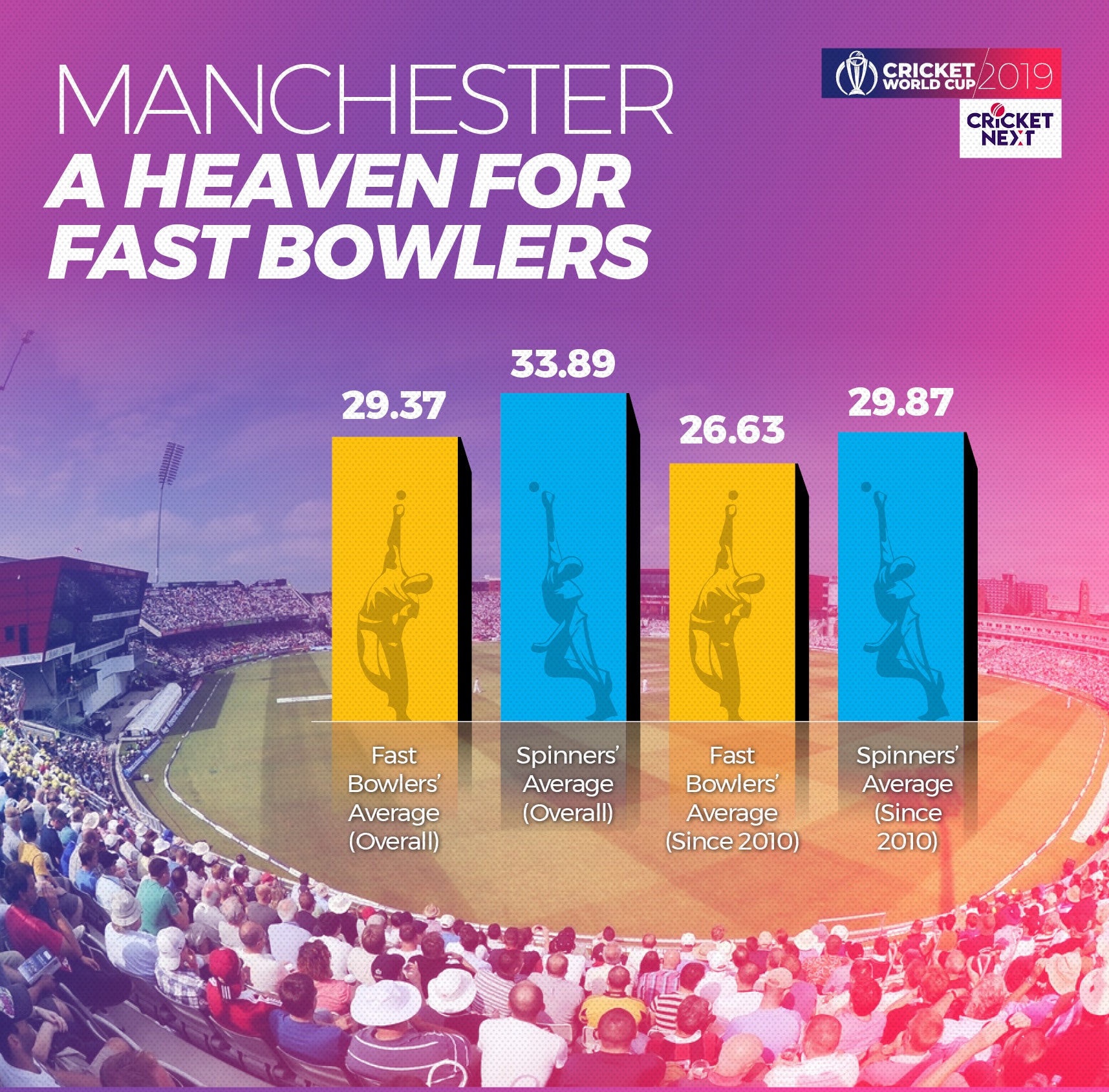 The bowling average for fast bowlers’ at Old Trafford is 29.37, more than 4 runs per wicket better than the average for spinner’s at the venue (33.89). The pattern has continued in the decade too with the pacers’ averaging 26.63 as compared to 29.87 by the spinners at the venue.

India might bolster their pace attack and include Mohammed Shami in place of Kuldeep Yadav.