Catch all the action of the third day of the third Test between India and South Africa through our live blog.

That's it for the day then, South Africa end day on 17/1, do join us tomorrow for all the live action! South Africa still need 224 more to win and India require 9 wickets!

Cricketnext's Baidurjo Bhose from Johannesburg
Meeting going on between Kohli, du Plessis and match referee Andy Pycroft as it has started raining in Johannesburg. It will be really sad if the match gets abandoned due to the last ball when Bumrah hit Elgar. Gavaskar says if India had done the same thing chasing 241 in the fourth innings, they would have been called sissies

Now we are having a slight drizzle and the covers are on the field, looks highly unlikely that we will have any further play today

Sunil Gavaskar with some really strong words, saying that if Indians had walked off in such conditions then they would have been called sissies!

Both sets of players are walking off the field, our guess is that the captains and the umpires along with the coaches will have a chat in the referee's room..We will get you all the updates as they happen..

Umpires in discussion with the match referee.. 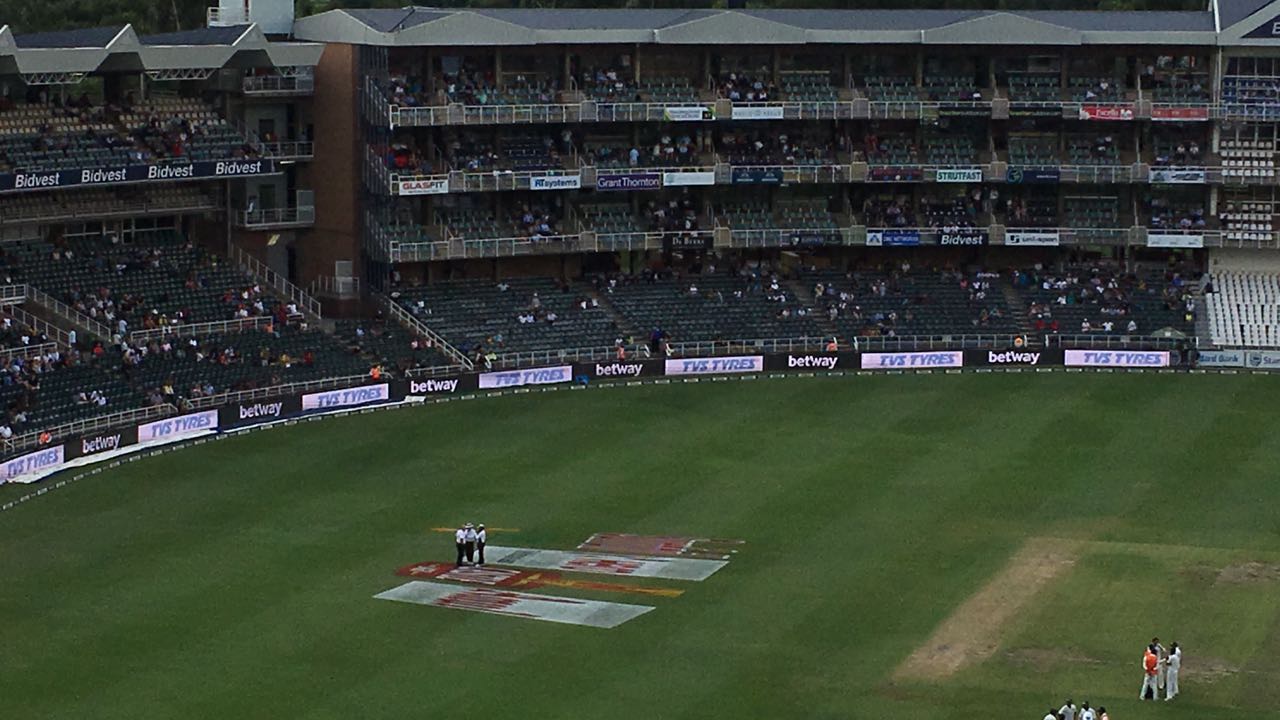 Elgar certainly fighting it out there, the pitch certainly has a few demons in it. After being hit on the hand a couple of times, now he is hit on the grill. Umpires again coming together. SA 17/1 at the moment

Cricketnext's Baidurjo Bhose from Johannesburg
A convincing pull here from Elgar off Shami as the pacer pitches one a bit too shot and then follows that up with a crisp drive even though Kohli cuts it down to just a run. It is coming to an interesting battle for Saturday as both teams will look to play for their lives in this one. Amla and Elgar fighting out the closing stages of the day here

FOUR! Elgar showing some flair there, gets on top of the bounce and just whips the ball away to the boundary. SA 14/1 at the moment

Cricketnext's Baidurjo Bhose from Johannesburg
Looks like Elgar has finally got one in the middle of the bat after missing and being hit on the hand and thigh pad. Not the most conducive of conditions to bat on and even someone like Amla is looking very circumspect on this wicket. If they can score 241 on this wicket on the fourth day, they deserve a whitewash

Another quite over, just 1 run coming off that one. South Africa certainly looking to play out the day here and start again tomorrow. SA 9/1

Bhuvi concedes just 2 runs from that over, Amla is struck on the gloves but he seems to have learnt his lesson. He has some extra protection on in the index finger. SA 8/1

Cricketnext's Baidurjo Bhose from Johannesburg
Shami is looking unplayable here as Elgar is huffing and puffing here. South Africa need to play out of their skins to even think of saving this one considering the deteriorating condition of the wicket at the Wanderers. The Indians should seal this one on the fourth day

Shami, Bhuvneshwar certainly making the ball move and talk here. South African batsmen seem to be in all sorts of trouble. SA 6/1 currently, need another 235 to win

Again the ball misbehaves after pitching on length, comes back in and bounces sharply to wrap Elgar on the gloves. He looks to be in pain as the physio is called in..

Cricketnext's Baidurjo Bhose from Johannesburg
That is the first one back to the pavilion as Shami sends back Markram for 4, caught beautifully by Parthiv. That ball once again moved viciously and it is becoming worse with every passing session at the Wanderers. India need 9 more such balls to win this one

Markram starts with a fine boundary, 4 runs off the first over from Bhuvneshwar Kumar. If South Africa are to have any chance in this match, then they need a soild start. They are 4/0 after the 1st over.

Aiden Markram and Dean Elgar are out in the middle for South Africa..Bhuvneshwar Kumar out with the ball for India..

A target of more than 200 has been chased only on 3 occasions prior to this match.

WICKET! Bumrah departs and Philander strikes, Bumrah manages to top edge and Rabada completes a simple catch. India are bowled out for 247, that means South Africa will need 241 runs to win here. India will certainly be the happier team at the moment.

Ishant, Bumrah certainly swinging alot but not connecting much at the moment. India 247/9, and lead by 240 runs

WICKET! Finally a breakthrough for South Africa, Bhuvneshwar finally manages to get some bat on that ball, outside the off stump. He nicks it through to de Kock who completes a simple catch. India 240/9, leading by 233 runs.

Cricketnext's Baidurjo Bhose from Johannesburg
Ishant Sharma survives a testing over from Lungi, even missing a few fuller ones. But he is still there giving Bhuvi company and more importantly, the lead reads 233 and the Indians are 10 runs away from scoring 250 on an almost unplayable wicket

Ngidi certainly beating Ishant Sharma with the pace but not being able to hit the wickets, India also not adding any runs at the moment, they are 240/8, leading by 233 runs

Bhuvneshwar Kumar plays out a maiden, you have to say that he will have to do the bulk of the scoring here. Not much can be expected from Ishant and Bumrah on this surface.

Cricketnext's Baidurjo Bhose from Johannesburg
Lungi finally breaks the 35-run partnership for the 8th wicket between Shami and Bhuvi as Shami pulls one straight to AB de Villiers at deep square leg. Bhuvi pats Shami on the back as the pacer walks back after scoring 27 crucial runs. The lead stands at 231

WICKET! Ngidi strikes, Shami's luck finally ends. He again looks to tonk it over the boundary. He swings hard, but finds AB de Villiers, who doesn't drop many. But he departs for a crucial 27. India 238/8

Cricketnext's Baidurjo Bhose from Johannesburg
30 golden runs so far from Bhuvi and Shami and this has shown why this team is the no. 1 team in world cricket at the moment in the Test arena. Yes, they lost the first two games, but they were in the game at all times in both of those and the kind of spirit they have shown in this game on such a wicket shows true character

Live Updates: India’s lead has reached 200 and that is just what the visitors wanted.

Catch all the action of the third day of the third Test between India and South Africa through our live blog.

Picture this! AB de Villiers is bowled neck and crop in the 37th over of the South Africa innings with one that swings in a mile after pitching on the sixth stump. A nod of approval from de Villiers as he walks back to the pavilion for just 5 on the second day of the third Test between India and South Africa at the Wanderers Stadium in Johannesburg. But the nod wasn’t for just the beauty that beat the former South Africa skipper all ends up. It was for the way Bhuvneshwar Kumar had set the bait by bowling out-swingers to the talisman in his previous over. Expecting another one to go away, de Villiers was ready to throw the kitchen sink at it, only for this one to come back in and send the stumps for a walk in the park. Five overs later, Jasprit Bumrah shows why he is one of the most spoken about young bowlers in the Indian circuit. Known to be one of the grittiest customers in world cricket at the moment, Proteas skipper Faf du Plessis shoulders arms to one from Jasprit Bumrah that cuts back just enough from the fifth stump to hit top of off. 8 off 19 as the skipper walks back to the pavilion with his head down and the score reading 107/5. These two dismissals sum up proceedings on a day when Bumrah (5/54) and Bhuvneshwar (3/44) brought India back into the game after the hosts had bundled them out for just 187 in the first essay. At stumps, India’s score read 49 for one – a lead of 42 runs — with Murali Vijay (13) and KL Rahul (16) at the crease.

The Proteas folded up for 194 – a lead of just 7 runs – leaving the match evenly balanced. While Bumrah and Bhuvneshwar had the wickets to show for their performance, Ishant Sharma deserves special mention for hitting the right areas for 14 overs. The only blacksheep of the unit had to be Mohammed Shami as he finished with figures of 1/46 off 12 overs. Hardik Pandya was hardly bowled, clearly showing a waste of a spot which could well have been utilised by R Ashwin. Coming out to bat in the second innings, India started with Murali Vijay and Parthiv Patel at the top, an eyebrow raising move considering that regular opener KL Rahul looked fit and there was no injury concern. In fact, there was close to 30 overs of play still left in the day and there was no way that sending in a nightwatchman was an option. Parthiv (16) got out to Philander with the ball taking the inside half of the bat and hitting the inside thigh before flying to Aiden Markram at gully. Rahul joined Vijay after that and played out the rest of the session without giving the Proteas any more chances. The old adage goes that morning shows the day. But that wasn’t really the case for the Indians on Thursday morning as nightwatchman Kagiso Rabada made the Indians sweat quite a bit after Bhuvneshwar dismissed Dean Elgar for just 4. Rabada combined beautifully with Hashim Amla to take South Africa to the brink of lunch before Ishant got him caught brilliantly by Ajinkya Rahane at third slip. The score read 81/3 at lunch with Amla batting on 32 and de Villiers yet to open his account. De Villiers started lucky after the break as even after he was caught plumb in front, the Indians did not go for a DRS after the umpire turned down the appeal. Replays showed that was out. But luck deserted him after a while when Bhuvneshwar came back to rock his stumps. Du Plessis too left soon after, leaving Amla and Quinton de Kock to do the hard grind. But Quinton’s rough patch with the bat continued as Bumrah got an inside edge off the keeper that went into the gloves of Parthiv.

With the score reading a precarious 125/6, Vernon Philander joined Amla and the two looked pretty composed in the middle as Shami disappointed with his failure to back the other three pacers who looked to have the Proteas looking for answers. The partnership finally ended when Amla (61) hit what was probably Bumrah’s worst ball in the match to Pandya at deep square-leg. It was a half volley on the leg stump. Philander (35) joined him in the hut six runs later as a bouncer from Shami took the top edge of the bat and Bumrah picked up a smart running catch at fine-leg. Andile Phehlukwayo (9) and Morne Morkel (9*) did take the hosts past India’s first innings score, but they could manage only 7 more as Bumrah cleaned up the tail.

Free live cricket streaming of Ind vs SA can be watched on Sonyliv. Live cricket score and Live commentary of Ind vs SA second Test can be followed on CricketNext. The Ind v SA live match from Johannesburg is being aired on Sony Ten 1.

Follow all the live updates from the third test between India and South Africa on cricketnext.com. Watch match live streaming here: