IND vs SA 3rd Test Day 4 Live Score And Updates: South Africa beat India by seven wickets in Cape Town to take the three match series 2-1. It was the biggest turnaround for the Proteas who had lost the first Test in Centurion. Temba Bavuma hit the winning shot as the celebration soon started in the dressing room. They had earlier beaten India with the same margin in Johannesburg. Earlier 70 runs and one wicket. The Read More

They did it! South Africa beat India by seven wickets at Johannesburg to take three match series 2-1. They beat them by seven wickets in Jo’Burg and here again they beat India with the equal margin. This one will go down long in the history. Bavuma hit the winning runs and the dressing room just lost it in joy.

SA 195/3—What a turnaround here for South Africa. No one gave them a chance as they lost to India in Centurion. But right from Johannesburg, they just hung in there and went onto outplay India. That was an epic chase in Jo’burg and now in Cape Town, they are yet again on the verge of a superb chase.

SA 190/3–What a shot from Temba Bavuma. Excellent back-foot play continues. South Africa have got some great middle order batters in Keegan Petersen and Temba Bavuma who can be ruthless on anything bowled short. Target now is just 22 away.

How much of a Role did Kohli's Outburst Play in India Losing The Way?

Some of the unsavoury comments made about umpiring and technology as well as broadcasters might not go down well with the match referee and the Indian skipper may have to cop a financial penalty. The incident happened in the 21st over when Ravichandran Ashwin flighted one which dipped and then straightened to beat a lunging Elgar’s bat.

Rassie vd Dussen welcomes Ravi Ashwin with a superb boundary. Swept him for four. This was preceded by a hoick over Fine Leg. Proteas look like in a hurry. The required target is just 35 away.

Welcome back to Newlands. India are on the brink of a series loss. Makes us remember the 2006-07 tour when India toured here won the first match only to lose the next two Test matches in Durban and Cape Town. Quite similarly, here India won in Centurion and then lost in Jo’Burg. High chances India will lose the third Test with SA needing just 41.

India vs South Africa 3rd Test Live Updates: Lunch taken on Day 4. South Africa have taken a giant step towards winning this decider. They have done really well in the morning session by scoring 70 runs for the loss of just one wicket in the chase of 212. Indian bowlers bowled their heart out with Jasprit Bumrah unlucky to have not seen the back of Keegan Petersen early on. Shardul Thakur, as he has done quite often, provided the breakthrough followed during a testing period following which Temba Bavuma struck a few boundaries to take back control. India will still feel they can come back but for that, they need a couple of early wickets early in the second session. Otherwise, this game is headed just one way from hereon.

India vs South Africa 3rd Test Live Updates: It’s not going India’s way at all. Shardul Thakur raps Rassie van der Dussen on the pads and this looks close but Marais Erasmus says no. India review. And hawkeye says that could have clipped top of leg-stump. India retain their review.

Bavuma With Two Fours off Bumrah

South Africa vs India 2022 3rd Test Live: The shackles have been loosened after that quiet phase. A short delivery, Temba Bavuma punches it square for a boundary. And then ends the over with a cover drive for another four. Nine runs from the over. South Africa 166/3, need 46 runs to win.

One of The Finest Test Centuries by an Indian

Rishabh Pant is a special player…played the best Test knock by an Indian in 2021 (Gabba). And here, he’s played another gem. It wasn’t even a contest without Pant’s contribution. #SAvInd 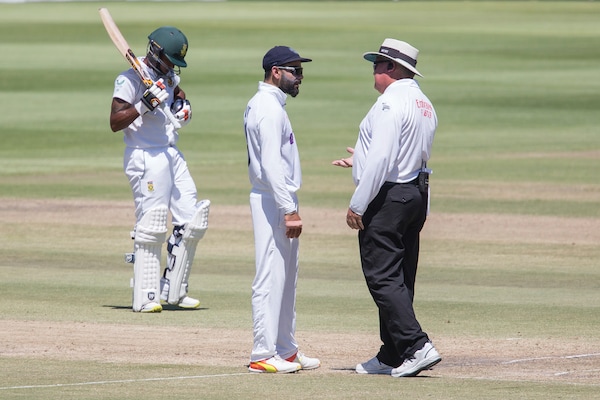 India vs South Africa 3rd Test Day 4 Live Score: 18 deliveries since the last run was scored. Since then, India have dislodged Keegan Petersen. Best chance for India to launch a comeback in this contest. Score 155/3, need 57 runs more to win.

India vs South Africa 3rd Test Day 4 Live Score: WICKET! Is that the opening India needed? Keegan Petersen chops on to be bowled on 82. A kind of a lazy shot this from Petersen who looked set for a maiden century. A short delivery and Petersen wanted to play it towards the offside but gets a thick inside edge to drag it onto the stumps. South Africa 155/3, chasing 212.

Live Cricket Score India vs South Africa 3rd Test: Mohammed Shami draws an edge but the ball rushes through to the third man region for a four. That takes South Africa to 152/2 and also brings up fifty-run partnership between Keegan Petersen and Rassie van der Dussen too.

India vs South Africa 3rd Test Live Updates: This game is headed South Africa’s way. 64 runs needed with eight wickets remaining. Unless something remarkable happens, India aren’t winning this. They have bowled well but not well enough you’d think. Jasprit Bumrah has bowled his heart out and nearly brought India back but for a dropped catch of Keegan Petersen on 59. He has since added 18 runs more to his total.

South Africa vs India 2022 3rd Test Live: DROPPED! Cheteshwar Pujara has put down a sitter at first slip. A superb delivery from Jasprit Bumrah that lifts at awkward height and Petersen can only fend it to the slip cordon where Pujara cannot hold onto the catch. No emotions from anyone except for Pujara who looks stunned. Petersen survived on 59. Could this prove game-changing?

South Africa vs India 2022 3rd Test Live: Umesh Yadav drops it short and wide, Keegan Petersen punches it through cover region for his eighth four. Five runs from the over. South Africa 126/2, chasing 212.

morning session has been South Africa’s. Not that Indian bowlers were poor. They bowled their heart out. A dropped catch, DRS call and the brilliance of in-form Keegan Petersen kept them at bay. Shardul Thakur provided an opening but the hosts bounced back from that jolt. They now need just 41 runs to seal the contest and the series.

Hello and welcome to our live coverage of day 4 of the third Test match between India and South Africa from Cape Town. India have a tough task ahead of them on the fourth day as they need some early wickets to stage a comeback in the game where the hosts are having an upper hand. The result is most likely to come out on Friday and the onus is on the Jasprit Bumrah and Co. to script the historic Test series win for India. Meanwhile, South Africa will resume from 101 for two on Day 4, 111 runs short of clinching the match and a series which is tied at 1-1.

South African captain Dean Elgar, the star of a similar chase in the second Test in Johannesburg, looked set to see out the day in partnership with in-form Keegan Petersen but fell to a diving leg side catch by Pant off Jasprit Bumrah in the last over of the day. He was out for 30.

Petersen, South Africa’s top-scorer with 72 in the first innings, was unbeaten on 48.

For India, Rishabh Pant made 100 not out off 139 balls, hitting six fours and four sixes, but received minimal support from his teammates as India were bowled out for 198.

Pant, batting with unorthodox flair, ran out of partners in a poor Indian batting performance but was able to notch his fourth Test century before the last wicket fell.

Indian captain Virat Kohli made an unusually subdued 29, batting for more than three hours and facing 143 balls but the next highest contributor to the total was 28 extras.

Chasing the target, out-of-form South African opener Aiden Markram made 16, all from boundaries but was then caught sharply at third slip by KL Rahul.

Having escaped with an extravagant drive which flew between third slip and gully, Markram repeated the shot against the next ball and was out with the total on 23.