We look at some of the numbers which define the difference between the two teams.

India registered their sixth series sweep (three or more Tests) in Test history as they recorded their biggest win ever over South Africa – by an innings and 202 runs in the third and final Test in Ranchi.

The way the hosts dominated the series and annihilated the South African batting and bowling unit – such domination has seldom been seen in any series victory anywhere in the world.

We look at some of the numbers which define the difference between the two teams.

MARGIN OF WINS AND LOSSES AND TEAM TOTALS

The margin of victories at Pune and Ranchi were the biggest ever for an Indian team against South Africa. India’s win at Ranchi was the sixth-largest ever in their Test history! Pune ranked at number 11. To register two of the biggest wins in India’s Test cricket history in one series shows the extent to which South Africa was outplayed in this series.

This was only the seventh instance in their Test history where India has recorded innings victories in two matches in a three-Test series.

The Ranchi loss was South Africa’s joint-third worst in their Test cricket history. This was also only the sixth instance in their Test history where South Africa had lost two matches by an innings in a series – the last time this happened was at home against Australia in 1936!

India batted four times in the series and scored 600-plus, 500-plus and almost 500 in three of these innings. Contrastingly, South Africa could not even reach 200 in four of the six innings they batted in the series. 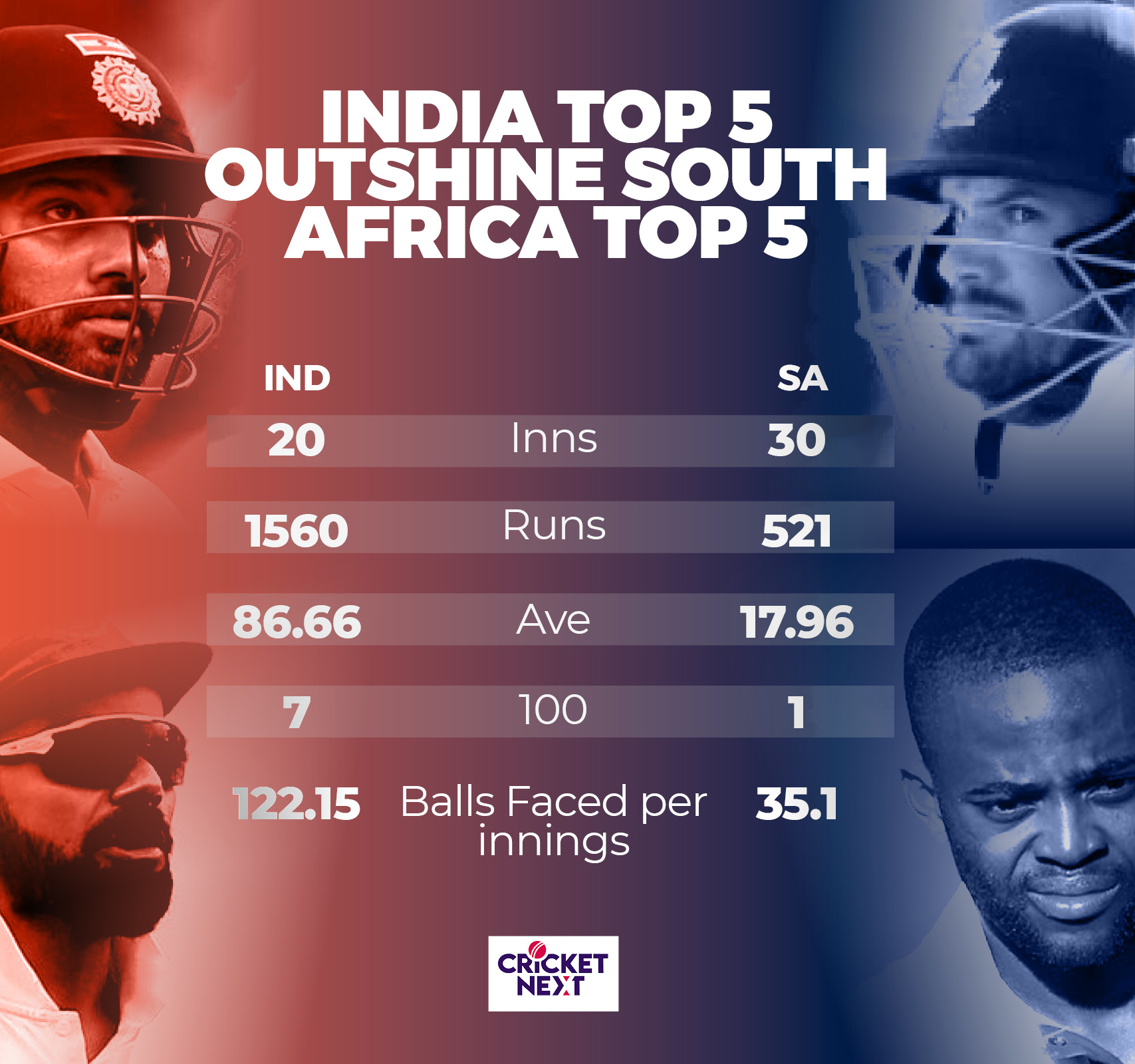 SECOND-WORST BATTING PERFORMANCE FOR AN OVERSEAS TEAM IN INDIA

The Indian top 5 batted in 20 innings and scored 1560 runs in the series at an average of 86.66 including 7 hundreds. On the other hand, their South African counterparts batted in 30 innings and could muster just 521 runs at a shocking average of 17.96 including just one hundred and one fifty.

In 19 of the 30 innings, their top 5 could not reach double-digits – these are alarmingly poor numbers.

Occupation of crease or the lack of it was a major problem for the visiting batsmen. Their top 5, on an average, faced just 35.1 deliveries per innings. The Indian top 5 faced almost three and a half times the number of deliveries.

South Africa faced just 627 deliveries across the two innings in Ranchi. It is amongst the lowest number of overs they have ever faced in a Test match defeat anywhere in the world.

Only one South African batsman, Dean Elgar, was amongst the top 5 run getters of the series. As many as three of their top-middle order averaged below 20 in the series. Overall, India averaged 74.84 in the series – almost 3.5 times than South Africa – 21.95! It was the 9th worst performance (in terms of combined batting average) for a visiting team amongst the 61 Test series in India (three or more Tests).

South Africa’s batting problems in the series were compounded due to the poor starts they got from their openers.

The average opening partnership for South Africa yielded just 4.83 runs per innings with a highest of 14. It is the worst average for the opening wicket by any touring team in India (two or more Tests).

The total number of balls faced by the opening partnership was just 83 which translates to 13.5 overs. Across 6 innings it averages to just about 14 balls per innings – that is how bad the performance was.

The failure of the openers to spend any time at the crease meant that the South African middle-order was exposed to the new ball. Rohit Sharma scored 529 runs in his debut series as opener in 4 innings at an average of 132.25 in the series. Only three Indian batsmen – Virat Kohli (610 runs against Sri Lanka in 2017), Virender Sehwag (544 against Pakistan in 2005) and Sourav Ganguly (534 against Pakistan in 2007) have aggregated more in a series of maximum three Tests.

Rohit’s three hundreds in the series are also the joint-highest for an Indian in a series of maximum three Tests.

Almost as significant as the big runs he scored is the rate at which he scored them. The average strike rate of the other Indian batsmen in the series was 61.36. Rohit scored at a rate of 77.45. This not only demoralized the South African attack but also created time for the Indian bowlers to bowl South Africa out twice. This is what Sehwag did successfully for India in Test matches over the course of his career.

THE BEST PERFORMANCE BY AN INDIAN FAST BOWLING UNIT IN INDIA

South Africa’s biggest disappointment in the series was the performance of their bowlers as bowling was their stronger suit.

Their combined bowling strike rate of 114.2 is the third-worst for any touring team in India.

In contrast, the Indian bowlers averaged 22.84 and picked a wicket approximately every 8 overs.

Such was the domination of the Indian batsmen that the South African bowling unit could only take an aggregate of 25 wickets across the three Tests. In particular, it was startling to see the contrast in the performance of the two fast bowling units. On paper, the likes of Kagiso Rabada and Vernon Philander were expected to outperform the Indian pace unit sans Jasprit Bumrah.

But the reality was very different.

In complete contrast, the performance of the Indian fast bowling unit, in terms of both, bowling average and strike rate, was the best ever at home in their Test cricket history (in the 61 series comprising of three or more Tests).

Although R Ashwin was the leading wicket-taker of the series with 15 wickets, it was the performance of Mohammed Shami and Umesh Yadav which stood out.

It were the two best performances (in terms of average; min. 10 wickets in series) by Indian fast bowlers in any bilateral Test series in India.

Overall, such was the domination of the Indian bowlers that only one South African made it in the top 5 wicket-takers list of the series – Rabada picked 7 wickets at a disappointing average of 40.71 and strike rate of 77.1 in the series.

To conclude, two numbers sum up the entire series, both for India and South Africa.

51.99: the difference between batting average and bowling average (the higher the better) for India in the Test series – the highest ever against any team in India (three or more Testsin a series)

-53.48: the difference between batting average and bowling average (the lower the worse) for South Africa in the Test series – the lowest ever by any visiting team in India (three or more Tests in a series).