The three Indian spinners have combined for 6 of the 18 wickets in the Test so far, while it's the pacers who have stung South Africa, picking 10. Mohammed Shami and Umesh Yadav have extended their tremendous series, picking up five wickets each.

It’s a sign of India’s tremendous bowling strength that R Ashwin went wicketless in the first innings and has picked only one so far in the second, and yet South Africa have lost 18 wickets for 294 runs. And it’s not even the other spinners Ravindra Jadeja and Shahbaz Nadeem who have taken the bulk of the wickets.

The three Indian spinners have combined for 6 of the 18 wickets in the Test so far, while it’s the pacers who have stung South Africa, picking 10. Mohammed Shami and Umesh Yadav have extended their tremendous series, picking up five wickets each.

Shami had earlier destroyed South Africa in the second innings of the first Test in Viskhapatnam, picking up a five-wicket haul. Umesh played his first Test of the series in the second game, and impressed immediately getting six across two innings. South Africa would have come to India expecting trial by spin, but they’re facing equal threat from the pacers. In the whole series, South Africa have lost 26 out of the 58 wickets to pace.

That was on display once again in the final Test in Ranchi. The tone was set late on Day 2 when Shami and Umesh got Dean Elgar and Quinton de Kock, the latter falling to a brute of a short ball. The theme extended on the third day when Umesh bowled Faf du Plessis with a peach.

Umesh and Shami reduced South Africa to 16 for 3 in the first innings, after which they couldn’t quite make a comeback. There was a partnership between Temba Bavuma and Zubayr Hamsa, but never threatening enough to make India sweat. The pacers came back later to wipe out the tail, South Africa folding for just 162. 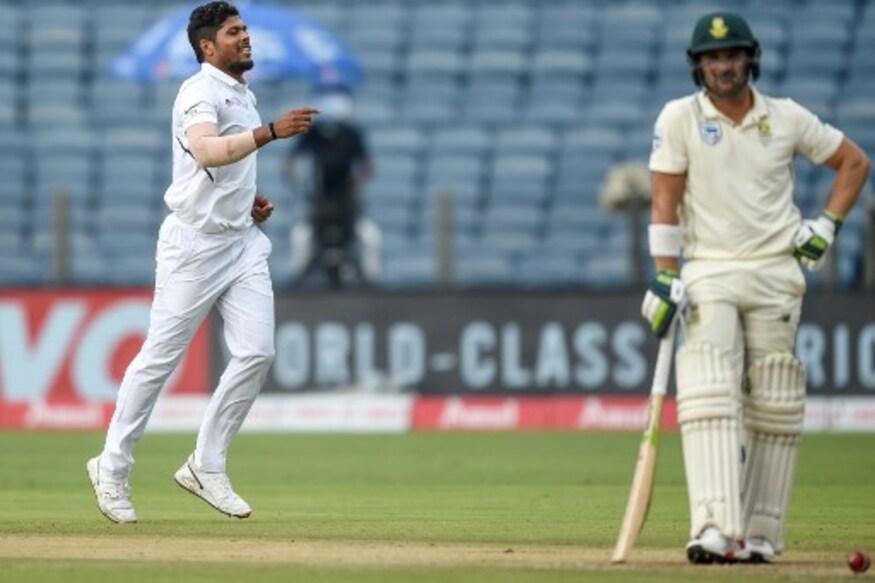 The pace-test continued for South Africa in the second innings, with Shami now taking over the lead role. He had shown in Vizag how threatening he is on crumbling pitches, with his seam position extracting sideways movement. The same was on display in Ranchi.

Umesh provided the initial breakthrough, dismissing de Kock with a beauty that uprooted the off-stump. It opened the floodgates for Shami, who had Hamsa, du Plessis and Bavuma in quick succession, each batsman unsure which way the ball would move. Hamsa and du Plessis played down the wrong line, while Bavuma was drawn into an outside edge around off-stump. The dismissals had seam position and accuracy written all over them.

Umesh was doing the same at the other end, trapping Heinrich Klaasen with one such ball.

Umesh and Shami were also using the short balls well. Bouncers, if executed well, are tricky deliveries to face on subcontinental pitches as it’s hard to judge how high they’ll bounce. Elgar found out in both innings with different consequences; he was unsure whether to play or leave in the first innings and nicked Shami to the keeper. He was unsure in the second innings and received a blow on his helmet from Umesh, resulting in a game-ending concussion. Umesh had also used the bouncer to brilliant effect during de Kock’s dismissal in the first innings.

This series will hurt South Africa more than 2015, as they can’t even blame it on the pitches. In 2015, India’s pacers were largely supporting acts; Umesh, Ishant Sharma and Varun Aaron had a combined tally of 8 wickets in 744 balls.

Compare that to this tour, where South Africa have already lost 26 wickets to 905 balls of pace. Umesh has 11, Shami has 13, while Ishant has 2. And to think Jasprit Bumrah isn’t even there!

In 2015, Ashwin had four five-wicket hauls while Jadeja had two. In this series, only Ashwin and Shami have one five-wicket haul each. It shows how balanced the attack is, and that the pacers are no longer just supporting acts.