Follow all the live action from Day 3 of the 1st Test as India take on Sri Lanka.

Lahiru Thirimanne: It was challenging. Once in a while we got unplayable deliveries. Overall, I think we batted really well. Angelo and I spoke about not just batting through the overs but scoring runs. We couldn't convert the fifties into big scores but that's what happens on this pitch. Even when you're in the fifties you get unplayable deliveries. But we should have made bigger scores. Indian batting is very strong and we couldn't ask any more of our bowlers.

So, that's it. It's official, play has been called off for the day. Sri Lanka will be the happier dressing room at the moment, but India won't be too disappointed. They could have done with a couple of more wickets. India will be hoping that they can fightback tomorrow in the first session, and continue to mount a strong comeback!

The players are off the field and that is likely to be the last action of the day, still waiting for the official word though. Sri Lanka 165/4, trail India by only 7 runs. But India have fought back after that Thirimanne and Mathews partnership.

CHANCE! Risky single from Chandimal, and he too seems to have done some damage to his back. He dives to get in but would have been short had Jadeja hit, but Jadeja with a dismal throw, and in fact Sri Lanka get 4 overthrow runs from that one.

And it gets worst for India, Mohammad Shami seems to have pulled his hamstring or seems to be suffering from cramps. He can't complete his over, and Virat Kohli has taken over, he completes the over - just one ball was left.

Indian bowlers certainly getting the ball to talk here, Bhuvneshwar Kumar comes back into the attack and he is getting the ball to move away. Sri Lanka surviving by playing and missing here for now, India will be hoping that this period of play gets them another couple of breakthroughs.

Four: Umesh once again bowls wayward and concedes a boundary. The right hander comes around the wicket and bowls onto the body of Dickwella. The southpaw just flicks the ball for a boundary behind the keeper. Sri Lanka cross 150 as drinks have been called for.

Bhuvneshwar Kumar replaced Shami in the bowling attack and he conceded just two runs from it. In the second session of the day, Bhuvi was easily the best bowler for India and he scalped two wickets as well.

Chance: Cheteshwar Pujara had the perfect chance to affect a run-out and further peg back the visitors. But he missed the stumps and Dickwella survived. Virat Kohli couldn't help but laugh as the throw had missed by some distance.

DRS: Umesh Yadav thought he had his third wicket of the day when the ball seem to have taken a top edge of the bat of Dickwella and Saha completed an easy catch. However, SL opted for the DRS and replays showed that the ball crashed into his shoulder. Third umpire over rules the decision as not out.

Indian bowlers have got their tails up now and the crowd has also joined the party after these two dismissals. In this last over from Shami, he beat Chandimal outside the off stump as well a off cutter that almost hit the stump. Good bowling from Shami.

Cricketnext’s Dileep Premachandran from the Eden Gardens: Tame end to a very good innings from Mathews. An uppish drive straight to the man at short cover. A shriek of despair from Mathews before he walks off. Umesh has two, and India are right back in this.

OUT: Umesh Yadav has done the trick for India once again as he has now gotten rid of both Thirimanne and Mathews after both registered their respective half-centuries. Mathews hits a length delivery straight into the hands of KL Rahul in the covers. Lanka lose their fourth wicket now.

Skipper Chandimal has now joined Mathews in the middle. Chandimal will hope he gives able support to the former skipper who has looked very good in the innings so far. Meanwhile, courtesy of fifties from Thirimanne and now Mathews, the visitors are closing in on to the Indian score.

FIFTY: Umesh bowls short Mathews obliges by hitting the ball for a boundary on the on side. And with that, Mathews also reaches his half-century in the match. Stunning innings from the right-hander who has held the fort from one end.

Cricketnext’s Dileep Premachandran from the Eden Gardens: Quite a reaction from Kohli after taking the low catch to dismiss Lahiru Thirimanne. Dhawan had given him a reprieve when he had made 25, and Sri Lanka just 70. They added a further 63 after that. Kohli pounding the ball into the turf sums up how frustrating the partnership was.

OUT: Umesh Yadav finally provides the breakthrough that India were craving for as he gets rid of Thirimanne for 51.Umesh bowls short into the body of the southpaw and the ball took an edge and Virat Kohli took a good diving catch at second slip. SL lose their third wicket.

Edge: Once again, there is an edge and once again it flies in between two fielders in the slip. There wasn't a third slip and India has paid for it. Shami produced a thick edge off the bat of Mathews but the ball went in between Kohli and Rahane in the slip cordon. Mathews gets a four as well and he moves onto 48.

Umesh Yadav continues to toil but he has been a bit wayward as compared to Shami and Bhuvneshwar.  Meanwhile, Virat Kohli keeps Shami into the attack and he continues to trouble Mathews outside the off stump but without producing an edge.

Stat Attack: This is Thirimanne’s first Test fifty-plus score since his 62 (also against India) at Colombo, August 2015.

50: Thirimanne slams his fifth half century of his Test career as Sri Lanka have taken full control of the match. The southpaw has slammed eight boundaries in his innings so far. He was dropped when he was on 27 by Dhawan and he has made full use of it.

Four: Umesh bowls a full delivery outside the off stump and Mathews seems to be waiting for it. Mathews comes onto the frontfoot and hits a boundary towards the covers. Fifth four of the innings for Mathews.

Shami starts off with a maiden on the first over of the final session. The right arm pacer has been one of better bowlers for India today but he hasn't been rewarded for it so far.

The players are returning to the field and the onus will be on India to start on the frontfoot. Shami will be bowling the first over in the final session. India coach Ravi Shastri must have given his team some pep talk as the hosts looked a bit uninspired in the second session.

In the final session of the day, India will have to break this partnership as soon as possible because at this rate, the visitors are very well poised to take a big lead in the match.

Umesh Yadav has been wayward in this innings so far as compared to the other Indian bowlers. However, he has been unlucky as well as earlier in the innings, he produced an edge of the bat of Thirimanne and the sitter was dropped by Dhawan at first slip.

Bhuvneshwar Kumar is now going off the field for reasons unknown so far. Murali Vijay has come out to field as his replacement. Eyebrows were raised when Vijay didn't make it into the playing XI for this Test but after the failure of Dhawan and Rahul in the first innings, it seems that he will get a chance in the coming matches.

This wicket is providing no assistance to the spinners and this is why Ashwin is not able to do much so far in his spell. Even during the Indian innings, Sri Lankan pacers performed better than their spinners. Time for Indian pacers to do the same. 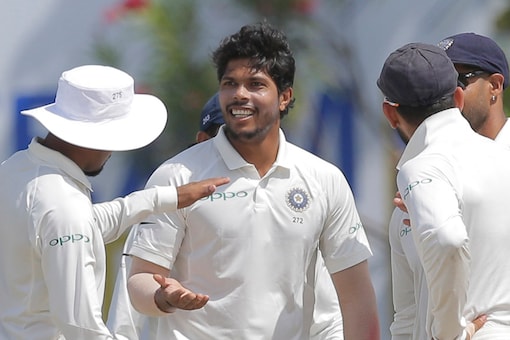 Latest Update: Umesh Yadav has done the trick for India once again as he has now gotten rid of both Thirimanne and Mathews after both registered their respective half-centuries.

Day 2 Review: Rain played spoilsport yet again in Kolkata after an interesting first session saw the Sri Lankans make more in roads into the Indian batting line-up, while the indefatigable Cheteshwar Pujara continued his resistance with an unbeaten hand of 47, which took the hosts to 74/5 before incessant unseasonal rains led to play being called off early.
Resuming at the their overnight score of 17/3, India lost Ajinkya Rahane early. Dashun Shanaka bowled in the channel outside the off stump and Rahane went for the drive and got a faint outside edge which carried straight into the gloves of wicket-keeper Niroshan Dickwella. Rahane, who has fallen to his temptation of driving on the up several times earlier, went back to the hut after adding just 4 runs to the total. India were 30/4 at this point.

Ravichandran Ashwin, who enjoys a great record with the bat at the Eden Gardens, was promoted above wicket-keeper batsman Wriddhiman Saha. Ashwin showed intent and skill as he hit a Shanaka full toss to the cover point boundary to get off the mark. Pujara on the other end showed great composure and skill, as he negotiated the Lankan paceman and also punished the loose deliveries. He was quick to attack the balls pitched up outside the off-stump and hit a couple of boundaries through the extra cover region. Ashwin though was hit on the thumb by a rising delivery from Gamage which shook him a bit. The all-rounder was dismissed in the next over as he drove on the up, outside the off stump, and was caught at point by Dimuth Karunaratne, India at this point were 50/5 and in trouble.

Saha came out next and along with Pujara tried to keep the Lankan bowlers at bay. It was around this time that visiting captain Dinesh Chandimal decided to give the part-timer Karunaratne a go to give a break to his main bowlers. Both Pujara and Saha capitalised on this and scored 17 precious runs off Karunaratne’s two overs. Pujara was poised for his 16th Test half-century before rain interrupted play and early lunch was taken. No more play was possible after that and India ended the day at 74/5. The match is expected to start at 9.15 AM IST and can be watched live on Star Sports 1, the live streaming will be available on hotstar.com. You can follow Cricketnext blog for ball-by-ball and live updates from the game.