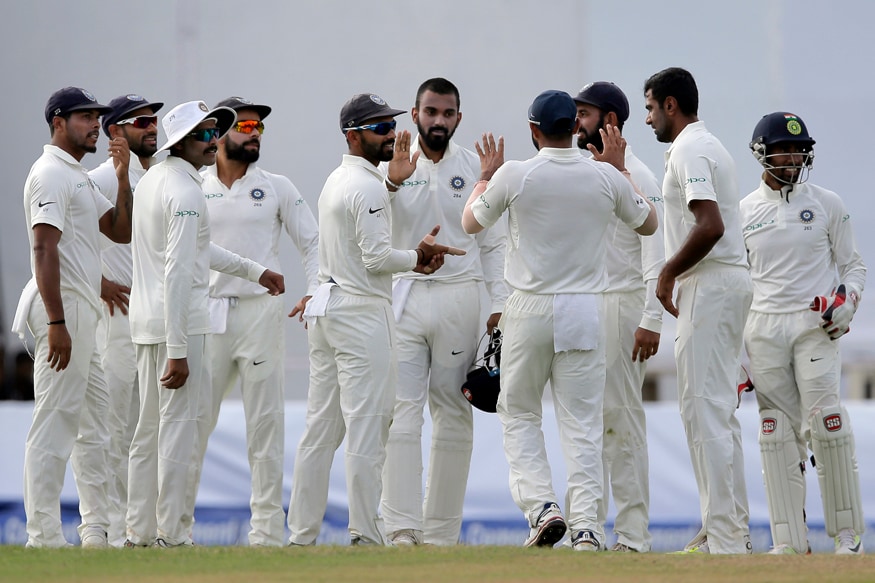 Colombo: India have now taken a vice-like grip on the second Test as Sri Lanka trail the visitors by 572 runs and they have already lost two wickets in their first innings at the Sinhalese Sports Club ground in Colombo on Friday.

After India decided to declare at the team score of 622/9, ace spinner Ravichandran Ashwin struck twice to pull the match firmly in India's corner.

In just the second over of the Sri Lankan innings, Upul Thranga hit an Ashwin delivery straight at KL Rahul — who was fielding at short leg — and somehow the ball stuck in his body and he was able to get hold of it. Skipper Kohli celebrated the first scalp of the innings by doing the 'dab' with Rahul.

Dimuth Karunaratne and Kusal Mendis tried to steady the innings but putting on a 33-run stand for the second wicket. But even this partnership didn't last long as Karunaratne became Ashwin's second scalp of the day.

The off-spinner found the outside edge of the southpaw's bat and Ajinkya Rahane took an easy catch in the slip. Dinesh Chandimal and Kusal Mendis then joined forced in the middle to end the day without suffering anymore hiccups.

Earlier, Cheteshwar Pujara and Ajinkya Rahane started the India innings from the overnight score of 344/3, but it was the hosts who drew the first blood on the day. In just the second over of the morning, Dimuth Karunaratne got rid of Pujara for 133.

Rahane then stitched a decent partnership with Ashwin, who was promoted up the order by skipper Virat Kohli. The duo put up a 63-run stand for the fifth wicket and also helped India cross the 400-run mark in the process.

But the partnership was finally broken by Malinda Pushpakumara, who deceived Rahane by flighting the ball and the right-hander was stumped for 132. Ashwin took charge of the innings and steadied the innings with the help of Wriddhiman Saha.

Ashwin then went onto to notch up his 11th Test half century and by doing so, he also became the fourth fastest to 2000 runs and 200 wickets in the longest format of the game. However, right after completing his fifty, Ashwin was castled by Rangana Herath on the next delivery for 54.

Hardik Pandya then scored a brisk 20 and put on a 45-run stand with Saha for the seventh wicket. But his innings was cut short by Pushpakumara, who a tossed the ball up and Pandya hit the ball straight into the hands of Angelo Mathews at long-off.

Saha then notched up his half-century, which was his fifth fifty in the longest format of the game. Ravindra Jadeja gave him able support from the other end and started hitting boundaries for fun. The duo put on a 72-run stand for the 8th wicket, which was also the second highest of the innings, in terms of runs.

Saha finally ran out of luck while he was batting on 67 as he was deceived by a perfect off-spinner and was found wanting out of the crease. Wicket-keeper Dickewella took no time in removing the stumps and Saha had to head back.

Following Saha's dismissal, Jadeja cut loose and hit back to back boundaries to bring up his half-century. This was also Jadeja's eighth fifty of his Test career. Mohammed Shami's 8-ball 19 propelled India closer to the 600-run mark and Jadeja helped the visitors cross it.

Kohli finally decided to declare at the team score of 622/9, as Jadeja remained unbeaten on 70.