India vs Sri Lanka 2021: Is The Sri Lanka Tour The Last Chance For Manish Pandey The Limited Overs Batsman?

Manish Pandey has had a stop-start international career and the tour to Sri Lanka might just be the last chance for the middle-order batsman to revive his limited overs' career for India.

India will clash with Sri Lanka in a three-match ODI and T20I series starting next week. While the second-string team boasts of a number of big players like Shikhar Dhawan, Prithvi Shaw and Suryakumar Yadav, there is another veteran in the squad whose name hardly gets a mention in headlines and columns by various cricket pundits and analysts. Manish Pandey has been a work-horse for India since his international debut in 2015 and despite some decent numbers has not found a consistent place in the Indian middle order. The tour to Sri Lanka might just be the last opportunity for the Nainital-born Pandey to cement a place in the Indian line-up.

A Great Start In ODIs But Then Tapered Off

Pandey made a fine debut for India smashing 71 off 86 deliveries from number 5 against Zimbabwe in Harare in July, 2015. He produced a stunning unbeaten 104 off just 81 deliveries from number 4 in a record 331-run chase against Australia at the SCG in early 2016 – in what was just his third outing for India with the bat. But indifferent performances in two home series – against New Zealand in October, 2016 and Australia in September, 2017 meant that Pandey went out of favour with the selectors.

Suresh Raina Names Players That Impress him Most, Leaves Rishabh Pant from the List

Pandey suffered a left side strain after a successful season with Kolkata Knight Riders in IPL 2017 and that meant he missed out on a ticket to England for the Champions Trophy and was replaced by Dinesh Karthik. The timing of the injury and his poor numbers at home went against Pandey and India had other options in Karthik, Dhoni, Jadhav, Yuvraj Singh, Rayudu and Rahane for the middle order. 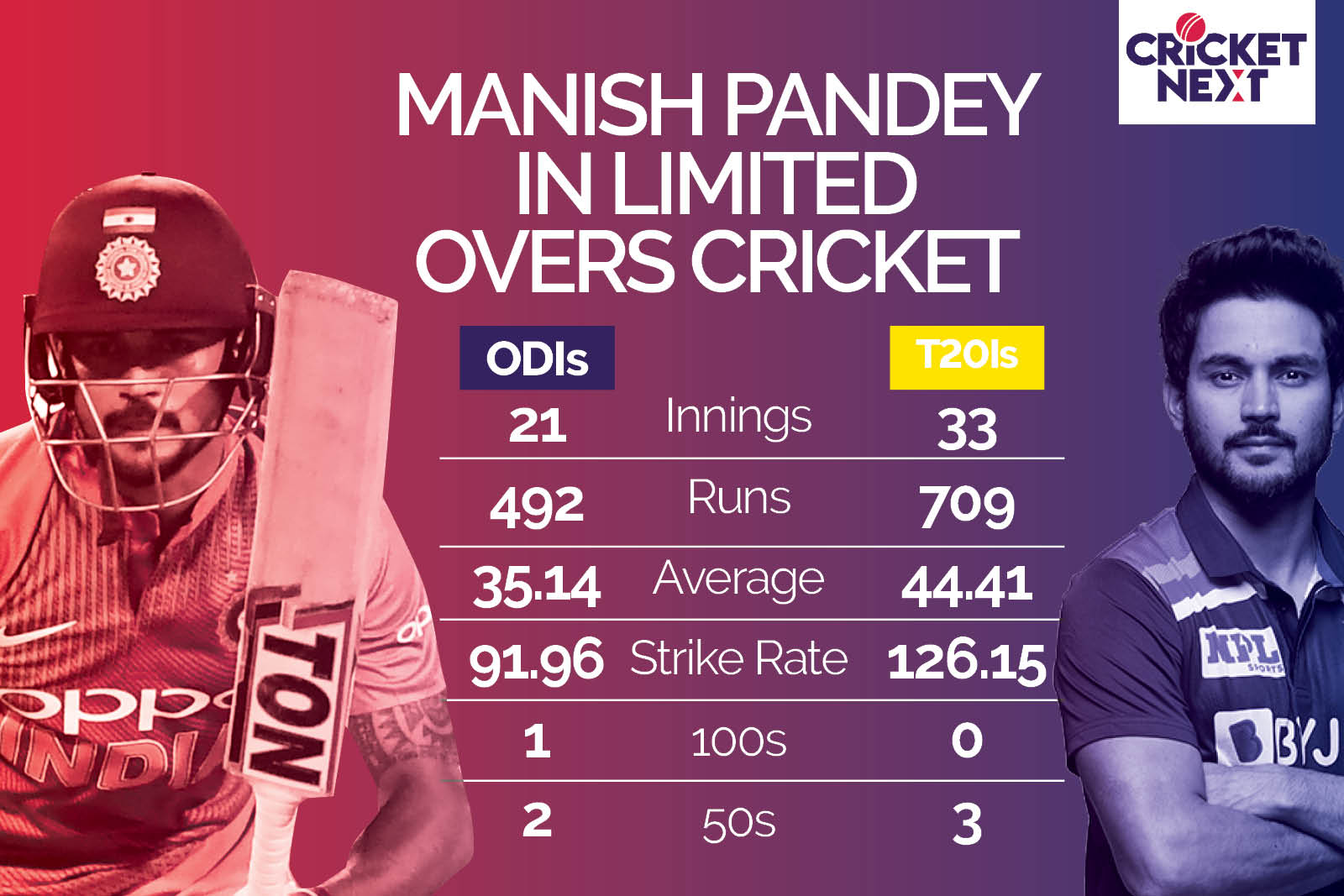 After a splendid start, Pandey’s ODI journey failed to take off and he did not produce a single match-winning performance with the bat for India for the remainder of his career. He could register just one more fifty and failed in as many as 9 of the 17 matches starting from the home series against New Zealand in 2016. An aggregate of just 171 runs in 13 innings in India at a poor average of 19 with a highest score of 36 was not good enough to make the cut for Pandey and post 2017 he found himself out of the playing XI only making sporadic appearances thereafter. He has played just 4 ODIs for India since the 1st of January, 2018.

Overall, Pandey floated in the middle order and played 7 innings each from the number 4, 5 and 6 positions.

Unlike in ODIs, Pandey did not have a rollicking start in his T20I career for India. His career took off after a splendid season for KKR in 2017 where he scored 396 runs in 14 matches at an average of 49.5 and strike rate of 128.57. Pandey aggregated 609 runs in just 27 innings for India post September, 2017. His batting average of 60.9 is not only the highest for an Indian batsman during this period but also is the highest in the world – but that has more to do with his 17 not out innings than the volume of runs he scored in this period.

Pandey has produced a few cameos during his career, significantly mostly against Sri Lanka with his 36-ball unbeaten 51 in a successful 170-run chase in Colombo in 2017 being the best of the lot. His best T20I knock though came against South Africa at Centurion in 2018 when coming into bat under pressure at 45 for 3, Pandey blasted an undefeated 79 off just 48 deliveries to take India past 180. He also scored 50 off just 36 deliveries, again when India had lost early wickets and were reeling at 75 for 4 against New Zealand in Wellington in 2020. This showcased Pandey’s ability to raise his game in difficult and adverse situations – a quality he has also displayed throughout his IPL career.

Pandey has all the shots in the book and can hit the long ball so the strike rate problem may have more to do with a lack of clarity of his role for India rather than ability. He has batted at the number 4 and 5 positions for 25 of his 33 T20I innings and has a strike rate of just 122.79 and 122.26 from these positions. This suggests that Pandey has essentially played the role of the accumulator for India in the middle order. The 7 times he was sent at number 6 he scored at a rate of 149.35 which clearly indicates that he has the ability to step on the accelerator if and when needed.

Although Pandey has been a consistent run-getter in the IPL and has an aggregate of 3461 runs at an average of 30.35, it is again his strike rate of 121.78 which is much below par for a batsman of his quality and prowess.

Having said that, Pandey has been in terrific form for Sunrisers Hyderabad during the last three seasons. He scored 344 runs at a strike rate of 130.79 in 2019, 425 runs at a rate of 127.62 in 2020 and 193 runs in just 5 matches in 2021.
What Pandey needs is clarity on his role in the middle order in both the formats and a little more intent from his side when he bats at number 4 or number 5. The team management should tell him what they expect from Pandey – is he the anchor who keeps the innings together and accelerates later – a role he has mastered for SRH in the IPL or will he be used as a death overs’ specialist playing a similar role to Hardik Pandya and Rishabh Pant in the XI.

Pandey’s best bet would be to make a return for India in the T20I XI at number 4 or 5 – with two successive WT20 tournaments scheduled for 2021 and 2022 a good show in Sri Lanka and the remainder of the IPL in the UAE could put Pandey back in the reckoning for India.

The Sri Lanka series is likely to be the last chance for Pandey to redeem his limited overs’ career. With a number of big players not available for the tour Pandey could come up with a few match-winning performances and revive his international career.

If not, he will always be remembered as ‘what could have been’!