India vs Sri Lanka 2021: Krunal Pandya 'Excited to Get Back in Action'; See Pictures

Krunal Pandya is gearing up for the first ODI against Sri Lanka.

The post received comments from his wife Pankhuri and sister-in-law Natasha Stankovic.

India’s spinning all-rounder Krunal Pandya made a stunning comeback in India’s team back in March this year. It was an emotional moment for the Baroda cricketer as it was the first time he was playing for India after his father passed away. Now, the 29-year-old is back in business as India are set to take on Sri Lanka. The all-rounder seems to be in good spirits as he posted a couple of pictures on Instagram. The post had two pics: in the first one Krunal can be seen with his bats, while in the second one he was seen having a deep conversation with Mumbai Indians’ teammate Suryakumar Yadav.

The post received comments from his wife Pankhuri and sister-in-law Natasha Stankovic. 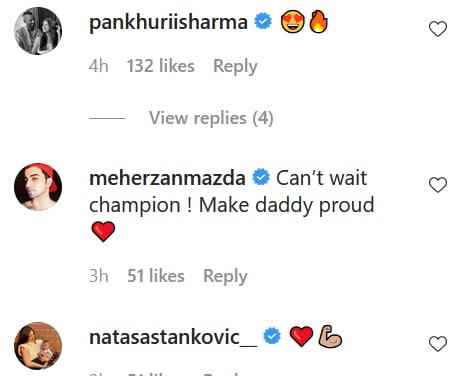 India and Sri Lanka will clash in a three-match ODI series starting in Colombo from Sunday, the 18th of July. With the main contingent on Test duty in England, it would be a chance for India, under the leadership of Shikhar-Dhawan to showcase the strength in their reserves. A few positions in the lower-middle order and the pace bowling unit are still up for grabs and a good performance in Sri Lanka can elevate the status of a few players. The series also provides the home team with a challenge to test some of their young talent and give tough competition to a highly skilled Indian outfit.

India annihilated Sri Lanka in a historic sweep (5-0) the last time they visited the country in 2017. Virat Kohli and Rohit Sharma were India’s stars with the bat in the series. While Kohli amassed 330 runs in 5 innings at a strike rate of 111.86 with two hundreds, Rohit scored 302 runs at a strike rate of 97.1 also registering two centuries. Jasprit Bumrah created a new record for any series in Sri Lanka bagging a whopping 15 wickets at 11.26 a piece at a brilliant economy rate of 3.9.

India has dominated Sri Lanka over the last decade all over the world and have a 16-4 head to head against their neighbours in the last 20 ODI matches between them. Since the 1st of January, 2011, India has beaten the hosts in 9 of the 10 ODIs they have played against them in Sri Lanka which is a staggering record.