In Numbers: How India Have Dominated Test Cricket in Recent Times

As India get ready to face West Indies in a two-Test series in the Caribbean – their first as part of the World Test Championship – we look at their performance in the format in the last few years, the players who have stood out and how India have fared overall as compared to the other major teams in Test cricket.

As India get ready to face West Indies in a two-Test series in the Caribbean – their first as part of the World Test Championship – we look at their performance in the format in the last few years, the players who have stood out and how India have fared overall as compared to the other major teams in Test cricket. The Best Win-Loss Ratio in Test Cricket Since 2016

India has the best win-loss ratio and winning percentage in Test cricket since 2016. They won 23 and lost just 8 of the 38 Tests they have played in this period.

Of course, their biggest achievement in this period was a historic maiden series victory in Australia (2-1) in 2018-19. Prior to this win, they had lost 8 and drawn 3 series in Australia. 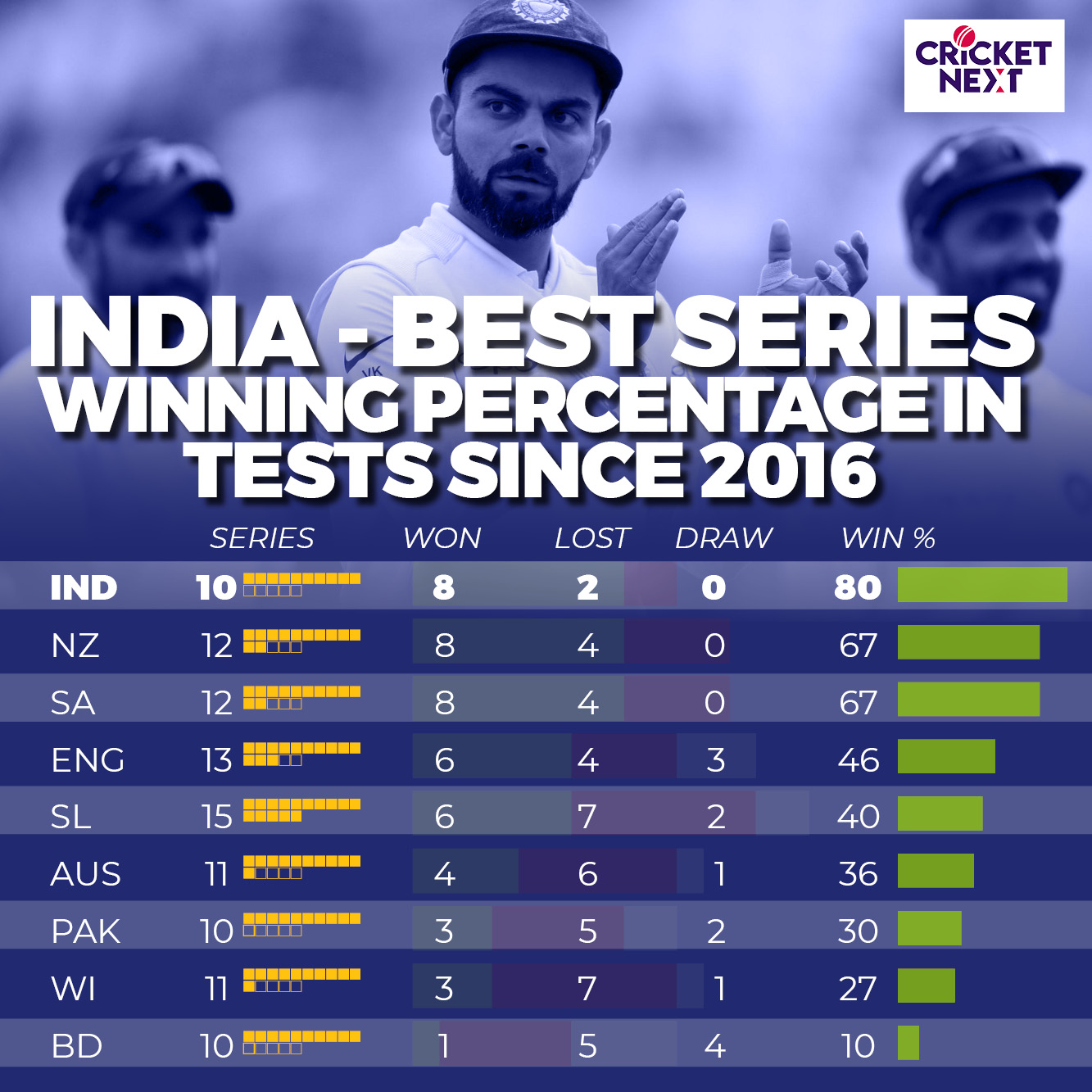 Of the 10 series India played in this period (not including one-off Tests), they did not lose a single Test in as many 6. They won 14 Tests at home in this period and lost just one – to Australia in Pune in 2017.

The two series they lost were both away – 1-2 in South Africa and 1-4 in England. The series-scoreline could have been different in South Africa had India capitalized on their chances in Cape Town. They also had the upper hand at various stages in the opening Test in Birmingham and again in the fourth Test at Southampton.

The Best Batting Team in The World

India has been the best batting unit since 1st January, 2016 with a collective average of 37.61. The ability of their batsmen to score big runs stands out – India have scored 53 hundreds in this period – the second-best being Australia with 38.

Virat Kohli (3619 runs in 36 Tests) and Cheteshwar Pujara (3006 runs in 36 Tests) are the two standout Indian batsmen during this period. They are the second and third-highest run-getters in the world only after Joe Root (3700 in 47 Tests) in this time-frame.

Kohli’s average of 65.8 in this period is the second-highest only after Steven Smith in this period. Pujara is not far behind at number 4. Ravindra Jadeja has been the surprise package with the bat. He has aggregated 1012 runs at an average of 42.16 including 9 fifties and a maiden hundred against the West Indies in Rajkot in 2018.

Jasprit Bumrah has led the charge with 49 wickets from just 10 Tests at a brilliant average of 21.89 and strike rate of 49.3 – the best returns for an Indian bowler (in terms of average and strike rate) in this period.

The performance by the Indian pace battery (in terms of average and strike rate) was the best ever for any pace attack to visit Australia from the subcontinent. R Ashwin has been India’s highest wicket-taker in the period with 166 wickets from just 33 matches.

Jadeja has been amongst the wickets and has picked 124 from just 25 Tests at an average of 23.64 – the best for a spinner in Test cricket in this period.

Ishant Sharma and Mohammed Shami have also played a significant role in this period. Shami has picked 97 wickets at 26.34 a piece at an impressive strike rate of 50.3. Ishant has picked 66 wickets from 22 Tests at an average of 26.33.

Overall, India’s average and strike rate has been the best only after South Africa in this period.

It does not come as a surprise that India are currently the number one ranked team in Test cricket according to the ICC Rankings.