Cricket is not just any other sport, it is ‘The Way of Life’ in India. A game it inherited from the British but has now, 73 years since independence, assimilated in its culture and DNA, mastered it and made it its own! We look back at some of India’s Cricketing Milestones since it achieved Independence on 15th August, 1947. Nothing unites India like cricket. It cuts across class, caste, region, religion, rich-poor, age and gender. Cricket is not just any other sport, it is ‘The Way of Life’ in India. A game it inherited from the British but has now, 73 years since independence, assimilated in its culture and DNA, mastered it and made it its own!

We look back at some of India’s Cricketing Milestones since it achieved Independence on 15th August, 1947.

It took India nearly 20 years (from debut) and 25 Tests to register their maiden Test victory. And in every way it was a big one! In a series-levelling effort in the fifth and final Test in Chennai, India thrashed their ‘erstwhile’ colonial masters, England by an innings and 8 runs. Vinoo Mankad’s 12-108 and hundreds from Pankaj Roy and Polly Umrigar were the standout performances in this historic win. Vinoo Mankad’s career-best 13-131 gave India a massive innings’ victory in the series opener in Delhi. Pakistan returned the favour and handed India a crushing defeat in Lucknow. But hundreds from Vijay Hazare and Polly Umrigar and another fine all-round performance by Mankad (41 & unbeaten 35) and 8-124, gave India a comprehensive 10-wicket win at the Brabourne Stadium in Mumbai. The fourth and fifth Tests ended in draws. On the 9th attempt, India won its first Test series.

Half centuries in both the innings from Chandu Borde and 8 wickets in the match for Salim Durani gave India a 187-run win in the fourth Test at the Eden Gardens. A fine 103 from Mansur Ali Khan Pataudi with 80s from skipper, Nari Contractor and Vijay Manjrekar coupled with 10-177 from Durani, handed the hosts a 128-run victory in the final Test in Chennai. The first three Tests were drawn.

Manjrekar was India’s highest run-scorer of the series with 586 runs in 8 innings while Durani was the leading wicket-taker with 23 wickets at just over 27 apiece.

It was India’s first series win against England. They had lost 6 and drawn one previously. It marked a turning point in their bilateral contest! Wadekar’s 143 was pivotal in India’s emphatic 8-wicket win in the third Test at the Basin Reserve while fine batting performances from Pataudi, Borde, Rusi Surti and Farokh Engineer coupled with 8 in the match for Erapalli Prasanna gave India a 272-run win at Auckland.

West Indies had dominated India in Test cricket. Prior to the 1971 tour of the Caribbean, the Test scoreline read 12-0 and series scoreline 5-0 in favour of the West Indies.

Sunil Gavaskar registered a couple of fifties on his Test debut against the West Indies in the second Test at Port of Spain in 1971. But it was Dilip Sardesai who played the defining knock of 112 giving India a 100-plus lead in the first innings. Prasanna and Srinivas Venkataraghavan chipped in with the ball as India recorded a famous win - their first Test victory against the West Indies by 7 wickets.

This was the only result-Test of the five-match series.

India had won their first series against the West Indies and a new star was born. Gavaskar amassed 774 runs in the series including 4 hundreds – it remains the highest aggregate by an Indian in any Test series! Sardesai also scored 642 runs with three hundreds in the series.

Bhagwath Chandrasekhar’s 6-38 in the second innings in the third and final Test at The Oval was the standout performance in India’s first Test win on English soil. Wadekar and Sardesai, with timely and significant contributions in both the innings, played their part with the bat.

This was the only result Test of the series. It was a historic moment for Indian cricket – their first series win on their seventh tour to England. Indeed it was Lucky 7!

Sunil Gavaskar piles up 732 runs, including 4 hundreds, in a six-match home series against the West Indies.

Yashpal Sharma top-scored with 89 as India caused a huge upset in their 1983 World Cup opener defeating two-time World Cup holders, West Indies by 34 runs in Manchester. This victory gave the Indian side belief and inspired them to do what they did in the days to come! Coming in to bat at 9 for 4 against Zimbabwe at Tunbridge Wells, Kapil Dev smashed an unbeaten 175 off just 138 deliveries including 16 fours and 6 sixes. India went on to win a crucial encounter. It was the highest score in ODI cricket till then.

The single-most defining moment in India’s cricketing and sporting history!

India beat the mighty West Indies by 43 runs at Lord’s and against all odds lifted the 1983 World Cup Trophy.

There were many heroes who shaped this historic win for India – Kapil Dev was the Highest Impact Player while Madan Lal the Highest Impact Bowler of the Tournament, Sandeep Patil had the maximum impact for India with the bat with a defining performance (51 off 32 deliveries) against England in the semi-final, Yashpal Sharma top-scored for India in 3 big matches while Mohinder Amarnath gave two memorable all-round performances in the semi-final and final.

This win not only changed how cricket was played and viewed in India; it changed India itself!

India beat Pakistan by 8 wickets at the MCG to win the Benson and Hedges World Championship of Cricket – a major one-day tournament involving the top 7 cricketing nations of the world. Kris Srikkanth top-scored in the final, just as he did in the final at Lord’s a couple of years ago!

Ravi Shastri was the Player of the Tournament for his super all-round contribution. He scored 182 runs including 3 fifties and picked 8 wickets in the tournament.

Vengsarkar was unstoppable in the summer of 86! His unbeaten 102 in the second innings was instrumental in handing India a thumping 279-run victory in the second Test at Leeds.

The third Test in Birmingham ended in a draw. India had won their second series in England.

Sunil Gavaskar became the first batsman in Test cricket history to reach the milestone of 10,000 runs during the Motera Test in Ahmedabad against Pakistan.

Mohammad Azharuddin blasted the fastest hundred in ODI cricket – of just 62 deliveries – against New Zealand in Vadodara. His unbeaten 108 off 65 deliveries helped India chase down 279 with almost three overs to spare.

The record remained intact for a little over 7 years before it was broken by Sanath Jayasuriya when he smashed a 48-ball hundred against Pakistan in Singapore on 2nd April, 1996.

The trilogy of Kumble-Raju-Chauhan spun India to their first series sweep (in a series with three or more matches) as they decimated England 3-0 at home with big wins in Kolkata, Chennai and Mumbai.

The series defined the India of the 1990s – they remained unbeaten in a Test series at home during the entire decade!

Kapil Dev broke Richard Hadlee’s record and became the leading wicket-taker in Test cricket history when he dismissed Hashan Tillakaratne (432nd wicket) during the third Test against Sri Lanka in Ahmedabad in 1994.

Sachin Tendulkar, opening for the first time in ODIs, tore into the New Zealand attack at Eden Park in Auckland and blasted 82 off just 49 deliveries.

It was the fifth-fastest above-75 knock in ODI cricket till then.

Post Auckland 1994, Tendulkar went on to become one of the greatest batsmen in the history of ODI cricket. 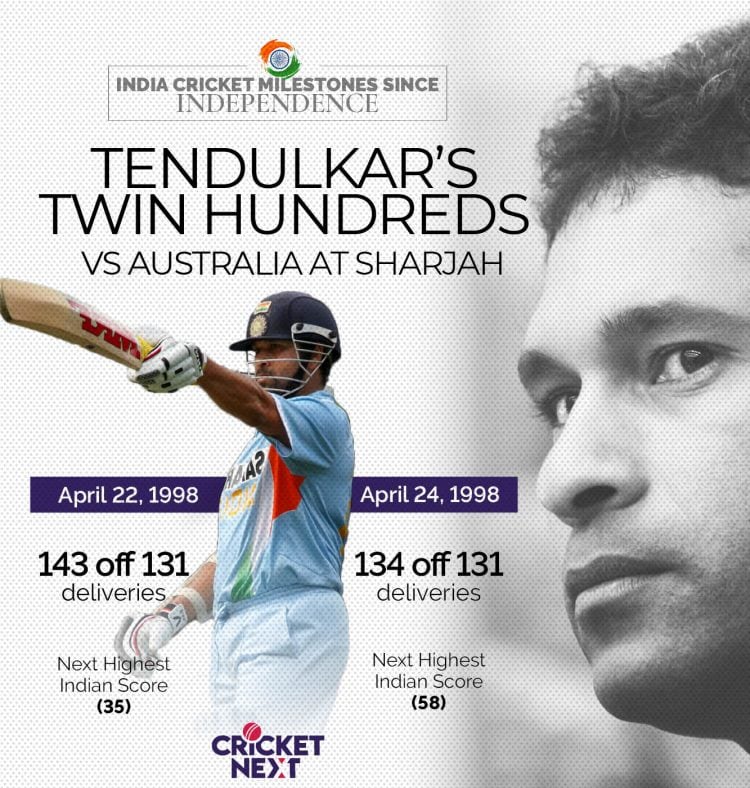 Sachin Tendulkar’s second hundred (134 in 131 deliveries) in three days helped India chase down Australia’s 272 in the final of the Coca-Cola Cup in Sharjah.

Anil Kumble became the second bowler in Test cricket history (after Jim Laker in 1956) to pick all 10 opposition wickets in an innings. He achieved the feat on Day 4 of the Kotla Test in Delhi against Pakistan when his 10-74 in the second innings handed India a massive 212-run victory.

Rahul Dravid and Sourav Ganguly became the first pair in ODI cricket history to record a triple century partnership when they put on 318 against Sri Lanka in the 1999 World Cup encounter at Taunton.

India became only the third team in cricket history to win a Test match after following-on when they defeated Australia by 171 runs in the second Test at Eden Gardens. VVS Laxman and Rahul Dravid’s colossal 376 run partnership and Harbhajan Singh’s 6-73 in the last innings were performances of a lifetime.

India went on to win a thriller in the series decider in Chennai by two wickets. They had beaten a world-beating Australian side – one of the greatest of all-time – in what was the most exhilarating Test series in Indian cricket history!

Yuvraj Singh (69 off 63 deliveries) and Mohammad Kaif (87* off 75 deliveries) help India chase down 325 against England in a memorable final at Lord’s.

Sachin Tendulkar amassed 673 runs in 11 matches in the 2003 World Cup in South Africa where India finished Runners-Up. It remains the highest aggregate in a single edition of any World Cup.

Rahul Dravid’s 270 was pivotal in another innings’ win for India in Rawalpindi.

India beat Pakistan 2-1 in the three-match series – it was their first and till date only Test series win in Pakistan.

Yuvraj Singh became the second batsman, after Herschelle Gibbs, to hit 6 sixes in an over in international cricket when he got stuck into Stuart Broad at Durban during the 2007 WT20.

India beat Pakistan by 5 runs in a thrilling final at Johannesburg in win the inaugural WT20.

Gautam Gambhir top-scored for India with 75 off just 54 deliveries.

Sachin Tendulkar became the first batsman in ODI history to record a double hundred when he smashed an unbeaten 200 off just 147 deliveries against South Africa in Gwalior. 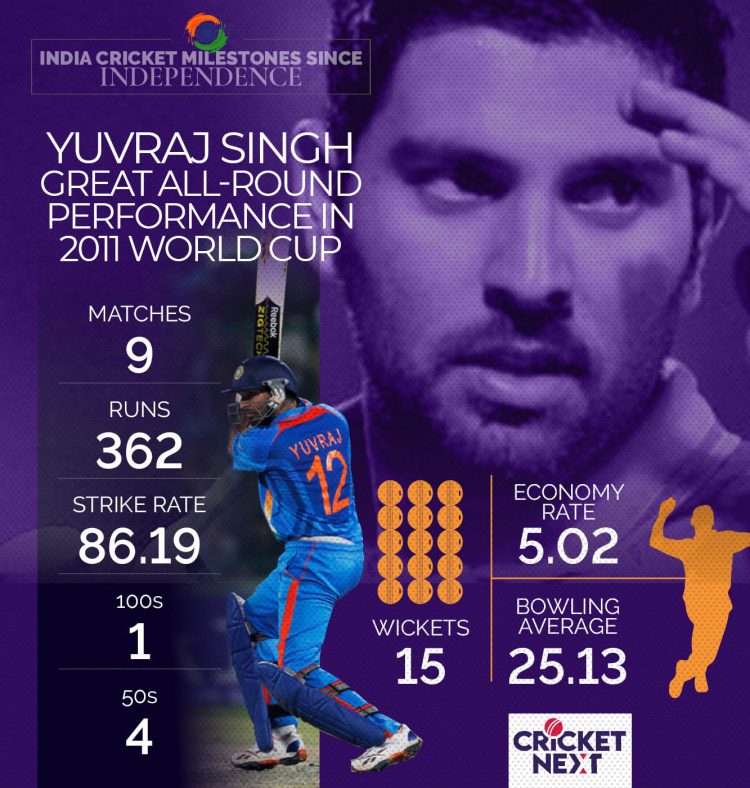 India beat Sri Lanka by 6 wickets at the Wankhede Stadium in Mumbai to lift their second World Cup title.

Gambhir, as he did four years ago, once again top-scored for India in the final but it was Dhoni’s unbeaten 91 off 79 deliveries which was the match-changing knock.

Yuvraj Singh was the Player of the Tournament for his exceptional all-round performance whereas Tendulkar was the highest impact batsman of the tournament.

Sachin Tendulkar became the first batsman in cricket history to score 100 international hundreds. He achieved this feat during an Asia Cup match against Bangladesh at Dhaka.

India beat England by 5 runs in Birmingham to win the Champions Trophy.

Shikhar Dhawan was the standout player for India in the tournament with 363 runs (including 2 hundreds) from 5 matches.

Rohit Sharma piled up 264 against Sri Lanka at the Eden Gardens which remains the highest ODI score by an individual batsman.

Virat Kohli broke Tendulkar’s record (of 259 innings) when he became the fastest (in terms of number of innings) to reach the milestone of 10,000 ODI runs. He achieved the feat in only his 205th innings – against West Indies at Visakhapatnam.

With wins in Adelaide and Melbourne, India won their first Test series Down Under (2-1) on their 12th tour.

Cheteshwar Pujara, with 521 runs from 7 innings, notched up three hundreds in the series and was the standout Indian batsman.

Jasprit Bumrah with 21 wickets was the exceptional bowler.

Rohit Sharma aggregated 648 runs from just 9 innings in the 2019 World Cup in England. He recorded 5 hundreds – the most by any batsman in any single edition of the World Cup.