Many young heroes from India's great series win Down Under may not feature in the starting XI in the home series against England. With the likes of Bumrah, Ishant Sharma, Hardik Pandya and Ashwin to return to the mix, players like Mohammed Siraj, Shardul Thakur and even Washington Sundar will find it hard to find a place in the XI.

The whole of India does not want to move on from what their men’s national cricket team achieved Down Under in 2020-21. Such was the colossal nature of the achievement. Such were the performances. Such was the resilience and courage and fightback. Such was the brilliance with which the whole team fought all kinds of adversities and recorded what is widely been recognized as India’s greatest Test series win in their cricketing history.

But life goes on. And so will the cricket and there is another huge Test series ahead for the country. England are coming home and the series assumes significance for it will decide whether India lands a ticket for the World Test Championship Final at Lord’s in June or not.

One of the striking features about what transpired in Australia was the once in a lifetime performance produced by the young brigade – players making their debut in the match, series or with the experience of one odd Test here and there – for all of them to collectively raise their game and rise to the occasion against a full strength Australian unit in their own backyard – this cannot be the norm. This was a special once in a generation effort by a group of motivated players – a kind of performance which in all likelihood they will never be able to replicate again in their respective careers.

There is also another reality which is going to hit the Indian team when they face England in the home series starting 5th of February. A number of their young inexperienced heroes who won them the series in Australia are either not part of the squad or will find it difficult to find a place in the playing XI.

T Natarajan and Navdeep Saini are not a part of the Indian squad for the first two Test matches. With Jasprit Bumrah and Ishant Sharma back in the mix, it is highly unlikely that Shardul Thakur will get to play in the entire series, especially if India go in with two spinners which is a very high probability. Forget Thakur, India’s highest wicket taker in the Test series, Mohammad Siraj, who made his debut in the Boxing Day Test at the MCG, may not get to play a single Test if India opts for the usual home combination.

With Hardik Pandya back in the squad albeit as a specialist batsman, the selectors and Kohli would want to slot in him at number 7 easing him into the role of an all-rounder may be later in the series. But with the wicket in Chennai likely to suit spin bowling, India would want a third option who could also bat at that position. Ideally, Ravindra Jadeja fits the bill but with his unavailability, it might mean another opportunity for Washington Sundar unless India decides to draft in Axar Patel.

But when the all-rounder Pandya is fit to perform both the roles for this country there will be no place for the hugely impressive Sundar too who changed the Gabba Test on its head with his partnership with Thakur in the first innings before producing a cameo in the second batting with Rishabh Pant.

Hanuma Vihari who batted with a hamstring injury and pain to secure the greatest save in India’s Test cricket history at the SCG is still recovering and is not a part of the squad to face England. But the middle order batsman will find it almost impossible to play a Test match in India where the think tank goes in with a 5+1+5 combination or a 5+1+1+4 combination if Pandya is fit and available. A realistic return for Vihari would be the tour to England later in the year.

So, basically this means that as many as 4 big heroes for India from their historic triumph in Australia – Sundar, Thakur, Siraj and Vihari – and two more who were supporting acts – Saini and Natarajan – may not feature in the Indian XI in the series which immediately follows. They would currently walk in the XI of almost in any other country in the world but such were the exceptional circumstances in which India came out victorious Down Under and such is the talent pool available in the country that some of the heroes of India’s greatest Test series win ever might actually not get a chance to play in the very next series.

With the likes of Ravindra Jadeja, Umesh Yadav and Mohammed Shami to return to the mix sooner rather than later some of the young brigade from Australia may not get a look in for some length of time. And who knows some of them might not ever play a Test again for the country. This is why what happened in Australia was special. It was as if all the stars were aligned for all these young players to come together and perform collectively to produce the performances of a lifetime. 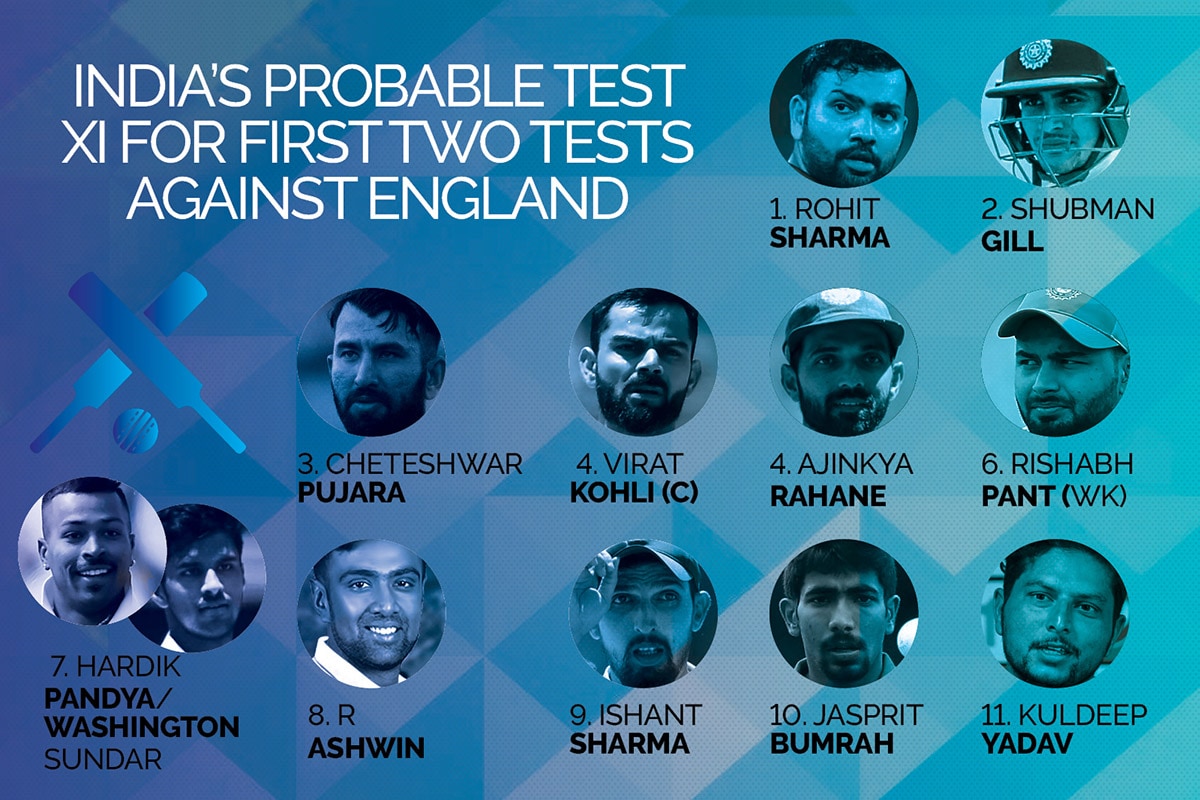 Coming back to the probable Indian XI for the first Test against England in Chennai – in all likelihood this is what the XI would look like:

Rohit Sharma was impressive in his first series as opener overseas Down Under. He had a great transformation when he opened for India for the first time in Test cricket in 2019. Rohit aggregated 556 runs in 5 Tests (6 innings) at an average of 92.66 and strike rate of 75.95 including two hundreds and a double hundred.

Shubman Gill was one of the finds for India in Australia. The elegant right-hander has a great first class record with an average of 66.55 and strike rate of 72.36 including 7 hundreds in just 26 matches.

Virat Kohli and Cheteshwar Pujara are the two best batsmen in the Indian XI feeding off each other at number 3 and 4. Kohli has the highest average (min. 1500 runs) for an Indian batsman at home (68.42) with 13 hundreds and is followed by Pujara (59.84 with 10 hundreds).

Ajinkya Rahane is one of those rare batsmen who have a higher away average (44.44) than at home (39.28). But a recently got a hundred in India against South Africa in Ranchi and after what he achieved in Australia – not only with that great century in Melbourne but also leading the team to victory in the absence of Kohli – only a brave man will question his position at number 5!

Rishabh Pant is currently the favour of the world and will occupy the number 6 slot as the wicketkeeper batsman. The number 7 position will be a toss up between Pandya and Sundar depending on what the selectors are looking at in the long run.

R Ashwin, India’s greatest match-winner with the ball at home in their Test history will lead the spin attack. In the absence of Jadeja, Kuldeep Yadav is almost a certainty in the XI given the opposition is England who are not known to play quality wrist spin bowling well. Jasprit Bumrah would lead the pace attack which will get bolstered by the return of Ishant Sharma who is one of the leading fast bowlers in the world since his remarkable transformation since 2018.