Harsh Goenka, brother of Rising Pune Supergiant owner Sanjeev Goenka, made a fresh attempt to appease the fans by likening Steven Smith and MS Dhoni's partnership to that of the iconic Sholay pair of Jai and Veeru.

New Delhi: Harsh Goenka, brother of Rising Pune Supergiant owner Sanjeev Goenka, made a fresh attempt to appease the fans by likening Steven Smith and MS Dhoni's partnership to that of the iconic Sholay pair of Jai and Veeru.

Goenka hasn't been a fan favourite of the RPS faithfuls during the course of the tenth edition of the IPL because of his comments regarding Dhoni early on in the season. Since his gaffe during the initial stage of the league, he has been constantly pulled up by fans on social media.

But in a new attempt to get back into the good books of the Pune fans, Harsh Goenka has come up with this new salvo.

Jai-Veeru are the most iconic duo ever created in the history of Indian cinema. Sholay's Jai (Amitabh Bachchan) and Veeru (Dharmendra) is still regarded as the best on-screen partnership in Bollywood. While Laurel and Hardy are the two most recognizable faces as far as English comedy goes.

By likening Smith and Dhoni to these iconic duos, what Goenka is trying to say is that the two players complete each other. One cannot shine without the help of the other. His Twitter post read: "Outstanding combinations: "Laurel- Hardy, Jai -Veeru, Smith- Dhoni #IPLfinal""

However, earlier, Goenka had applauded Smith, at the expense of Dhoni, after the Aussie skipper hit 84 runs off 54 balls to guide Pune to a scintillating win over SRH, during the early stages of league. 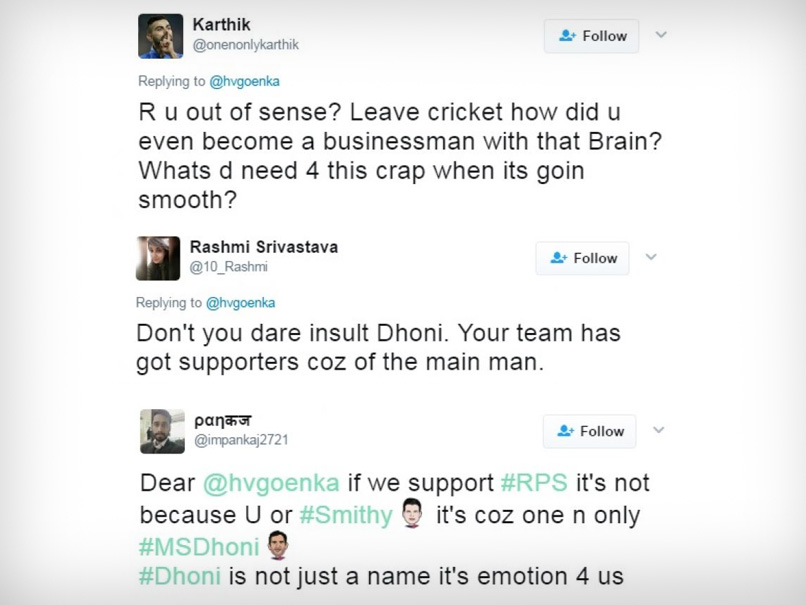 However, now, Harsh Goenka is really trying hard to win the fans back and has come up with this tweet.

But even this legendary partnership could not get Pune over the line as Mumbai won the IPL-10 final by one run to win the title for a record third time. Smith starred for RPS with a half-century, but he perished in the last over and couldn't get his team over the line.