Chris Gayle starred with the bat and Mohit Sharma kept his cool in the end as Kings XI Punjab registered a 4-run win over the Chennai Super Kings in Mohali on Sunday. 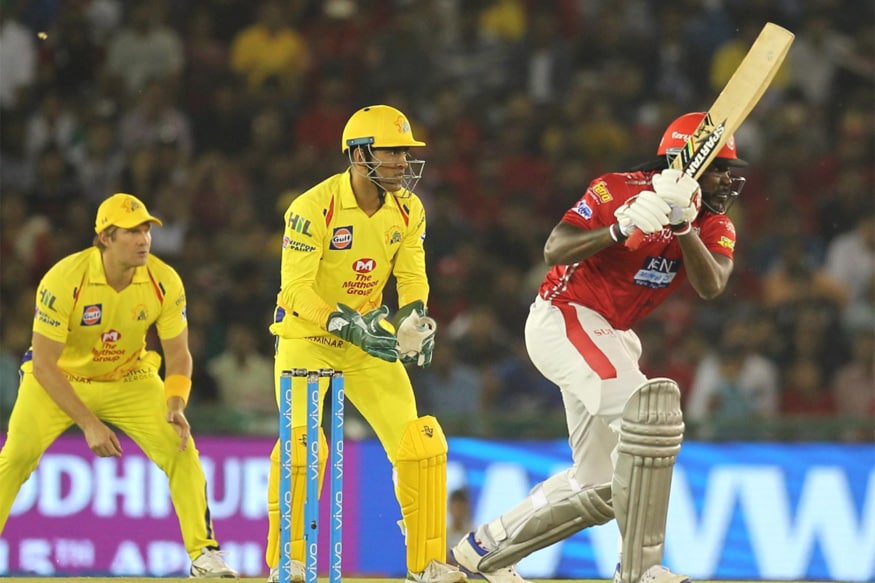 Chris Gayle starred with the bat and Mohit Sharma kept his cool in the end as Kings XI Punjab registered a 4-run win over the Chennai Super Kings in Mohali on Sunday.

Gayle announced his arrival to KXIP with a scintillating 63 runs from 33 balls. His magical innings included seven fours, four sixes as the hosts reached a commanding total of 197/7 after their 20 overs.

For CSK, it was the MS Dhoni show as he scored an unbeaten 79 off just 44 balls but for once, failed to take his team past the finish line.

The men in yellow were never really in the chase as they lost wickets at regular intervals.

Mohit Sharma removed Shane Watson early, the in-form Aussie making only 11. Murali Vijay, who had replaced Suresh Raina, didn’t last long either as he was dismissed for 12 by Andrew Tye.

Ravichandran Ashwin’s leg-spin accounted for CSK’s hero in the previous game – Sam Billings, as he looked to sweep the KXIP captain but completely missed the ball to be trapped lbw. Though, the umpire didn’t raise his finger, DRS came to Ashwin’s rescue.

However, then Skipper MS Dhoni then joined Ambati Rayudu in the middle and the two put on a 57-run partnership which got CSK back on track.

Dhoni’s injured back didn’t help their cause either as he had to call in the physio for treatement.

But as he often does, the 36-year-old took the game right till the end and started bringing in the big shots when the required rate reached 15. CSK needed 67 off 24 balls, but then Jadeja-Dhoni combo hit 9,19 and 19 runs in the 17th,18th and 19th over respectively.

This meant Mohit Sharma had the unenviable task of defending 17 runs in the final over.

He started by bowling yorkers outside the off-stump, which Dhoni struggled to hit due to a jarred back. In the end, it was enough to guide KXIP to their third victory.

Earlier, Gayle showed why he is still the most feared batsman across the world. It all started when on the first ball of his innings, he caressed Harbhajan Singh through the covers for a four.

There was no looking back from there as he notched a fifty in just 22 balls. His innings was instrumental in powering Punjab to the huge total.

After the departure of Gayle in the 12th over, CSK bowlers managed to put brakes on the scoring rate. In the first 10 overs KXIP made 115, but could only add 82 in the next 10.

The Punjab side lost its way in the middle of the innings where they needed batsmen to stick to the wicket. They kept losing wickets at regular intervals, and from being 149/2, they were reduced to 157/5. The dismissal of Australian Aaron Finch for a consecutive duck in the competition didn’t help them either. The middle-order collapse meant that Punjab finished good 20 runs short of what they should have achieved.

Karun Nair with innings of 29 ensured Punjab doesn’t throw away the initiative they got early on in the innings.

On the bowling front, Deepak Chahar proved to be really costly and gave away 37 runs from his three overs. Other pacer in the team, Shardul Thakur was on the expensive side and returned with figures of 2/33 in three overs. Shane Watson and Imran Tahir were responsible for putting the brakes on the scoring rate. Watson removed Gayle with his slower-one, while Tahir picked Mayank Agarwal and Finch.