IPL 2018, MI vs KXIP Highlights: As it Happened

Catch all the action of the IPL match between Mumbai Indians and Kings XI Punjab through our live blog.

KL Rahul almost in tears here as Mumbai stay alive in this edition of the Indian Premier League to fight another day. Pollard with the bat and then Bumrah with the ball star for the hosts and that wicket of KL Rahul changed the game completely as KXIP fall short by 3 runs here. They finish on 183/5 in their 20 overs.

6 runs from the Bumrah over and the all-important wicket of KL Rahul. Can Kings XI Punjab score 17 off the last over? Yuvraj Singh at the crease with Axar Patel and this will be the opportunity for Mumbai to stay alive in the tournament. Kings XI Punjab's score reads 170/4 after 19 overs

WICKET!!!! Bumrah has got the big one as KL Rahul walks back for 94 off 60 balls as this could be the match. The Wankhede Stadium erupts as the slower ball gets the better of Rahul and Kings XI Punjab now need 20 runs off 9 balls and this could well be the match for Mumbai Indians

15 runs from the Ben Cutting over and skipper Rohit Sharma is not impressed as KL Rahul uses the reverse sweep to perfection to hit back to back boundaries and Kevin Pietersen says on commentary that this guys is definitely the next big thing in Indian cricket like Sunil Gavaskar mentioned a little while back. The score reads 164/3, needing 23 off 12 balls.

WICKET!!!! Bumrah gets another one here as Stoinis goes for just 1 as Kings XI Punjab now need 38 with just 19 balls left. The score reads 149/3 as KXIP now have the task cut-out. It is now all on KL Rahul to guide the team home here. Can Mumbai stay alive in the competition with a win?

WICKET!!! The big wicket of Aaron Finch here as Mumbai Indians are right back in the game as Bumrah gets his man, caught beautifully by Hardik Pandya as Finch goes back for 46 off 35 balls as the score reads 145/2 in the 17th over. Is this the wicket that Mumbai needed to get back in the game? The chase is on for sure.

KL Rahul shows his class as he goes for back to back sixes and the pressure is suddenly off Kings XI Punjab. Rahul takes the attack to Markande and what success. Shows why the pundits rate him so highly. Rahul has almost been a one-man show for Punjab this season. The score reads 145/1 as KXIP now need 42 off 24 balls with 9 wickets in the bag.

6 runs off the Hardik Pandya over here as KL Rahul and Aaron Finch are slowly starting to feel the pressure here as they need to up the ante and ensure that the next batsman if he has to walk in, does not feel the heat here as the score reads 127/1 with KXIP needing 60 off the last 5 overs

10 runs from the over as Finch hits a boundary off Krunal Pandya as Kings XI Punjab now need 66 off the last 6 with 9 wickets in the bag. This is there game for the taking as the umpires call for the strategic break here with the score reading 121/1 after 14 overs

Cutting hasn’t bowled a single over...does #MI play him as a batsman? But he bats at 8

KL Rahul in chases this year: -

4 runs from the Bumrah over here as the Kings XI Punjab duo of KL Rahul and Aaron Finch look in complete control of the situation here. Rohit turns to Bumrah, but the batsmen looking to play smart and not take too many chances against the pace spearhead here as the score reads 99/1 after 12 overs. 88 needed off 48 balls.

50 for KL RAHUL as he hits his sixth and the 10th overall as Kings XI Punjab are in this game and making things look extremely easy on a wicket which has suddenly started to look easy in the second essay. Both the batsmen just need to keep their wickets intact and not throw it away as the score reads 95/1 with 9 overs left in the game.

6 runs from the Hardik Pandya over here as the score reads 86/1 after 10 overs and the Kings XI boys need another 101 runs from the last 10 overs with 9 wickets in the bag. This will be a walk in the park if the KXIP batsmen can keep up the ante without losing a wicket here.

Gayle has been susceptible against the short ball this season and once the opposition bowlers found that out, he has been a sitting duck

7 runs from the Markande over here as KL Rahul and Finch are now looking to keep things simple and go through the motion and wait for the right time to launch into an attack in the business end of the game. Keeping the wickets in the bag is very important for KXIP here as the score reads 81/1

7 runs from the Krunal Pandya over here as KL Rahul is looking in awesome touch here as he is playing it easy and steering the team towards the total. Finch giving him perfect company. The score reads 73/1 after 8 overs with the two looking in complete control here in the middle.

9 runs from the Markande over here as the Mumbai Indians players have come out with another strong plan after the break and skipper Rohit Sharma straightaway hands the ball to Markande and KL Rahul looks to be attacking and starts with a boundary. The score reads 66/1 after 7 overs

11 runs from the Krunal Pandya over as KL Rahul gets a life on 22. This could turn costly as the batsman has been in full flow and is now the orange cap holder. Rohit Sharma has his task cut-out as Mumbai need to get a couple of wickets here and the umpires call for the strategic break here as the score reads 57/1 after 6 overs 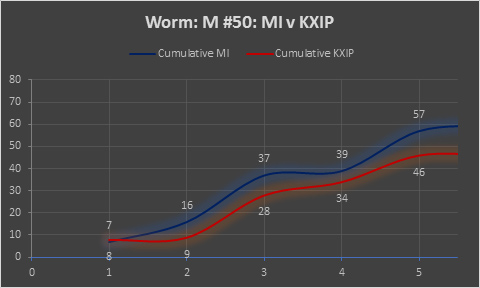 12 runs from the Hardik over as Rohit Sharma took a chance by giving the all-rounder another over. But Finch finishes the over with a huge six into the long-on stands. The crowd is loving the contest here as Kings XI Punjab look to chase down Mumbai Indians' score of 186 at the Wankhede Stadium.

WICKET!!!! McClenaghan gets Chris Gayle as the Universe Boss goes for 18 off 11 balls as the short ball has done the trick again. Cutting takes a really good catch at deep mid-wicket. That went really high and it was not the easiest of catches. The score reads 34/1 after 3.5 overs

19 runs from the Hardik Pandya over as Chris Gayle first hits a six and a boundary and then KL Rahul gets two boundaries. While the first one was streaky and to the the third-man boundary and then hits a beautiful cover drive as the score reads 28/0 after 3 overs.

Brilliant start from Bumrah here as he gives away just 1 run from the second over of the KXIP innings as both KL Rahul and Chris Gayle are looking at a really cautious approach here at the Wankhede Stadium. Looks like a slightly more difficult wicket to bat on with the change in pace being used by the bowlers. The score reads 9/0 after 2 overs

KXIP start with 8 from the first over as KL Rahul gets a six with a top-edge over the keeper's head. Apart from that it was a good over from Mumbai pacer McClenaghan. The hosts need to keep it tight and not let the Punjab openers free their arms here in the powerplay. The score reads 8/0 after the first over

11 runs from the last over as Mohit Sharma didn't look really comfortable here and could things have been different if Ashwin had bowled the last over? This is a chase-able total at the Wankhede for sure, but do KXIP have the batting to reward Tye for what was a brilliant bowling performance. MI finish on 186/8

WICKET!!!! Tye picks up his fourth wicket here as Hardik looks to take the attack to the bowler and the wide slower ball lands straight into the hands of the short third-man fielder where Ashwin picks up a dolly. Hardik goes for 9 as the score reads 170/8 in the 19th over.

WICKET!!! Ashwin gets another one as Cutting goes for the sweep and the carrom ball lands straight into the hands off Axar Patel at wide long-on. The KXIP fans are happy as the 7th wicket falls here in the 18th over of the innings. Brilliant comeback here from the KXIP bowlers, led by skipper Ashwin.

3 runs from the Andrew Tye over here as the Mumbai Indians batsmen are clearly looking at giving him the respect he deserves with the accuracy that he has bowled with. The score reads 157/6 after 17 overs as Hardik Pandya and Ben Cutting have 3 overs to make this count and finish well.

Preview: Just when Mumbai’s dream of making it to the final four was on the verge of getting shattered, the Rohit Sharma-led brigade came up with a spirited show to register a hat-trick of wins before faltering against Rajasthan Royals in their previous game. The live telecast of the IPL 2018 match between Mumbai Indians and Kings XI Punjab will start at 8PM on May 16th (Wednesday). The match can be seen live on the Star Sports network and live streaming will be available on hotstar.com. You can also follow the match live blog for ball-by-ball updates, full score and IPL match highlight on cricketnext.com. Mumbai have to win both their remaining two matches to keep their chances alive for advancing to the play-offs. With 10 points, the three-time champions are placed at the sixth spot in the IPL points table while their opponents are a spot ahead with 12 points in their kitty. Mumbai will once again rely on opener Suryakumar Yadav, who has been consistent with the bat, amassing 473 runs from 12 innings. The other opener Evin Lewis also got back his touch in the last match, hitting a 42-ball 60. However, Mumbai’s middle order failed miserably including skipper Rohit. Barring his match-winning knock against Royal Challengers Bangalore, Rohit has failed to live up to the expectations this season. The Pandya brothers — Hardik and Krunal — will also need to dish out something special if they are to stand any chance of making it to the final four. In the bowling department, Jasprit Bumrah, Hardik and left-arm pacer Mitchell McClenaghan will have to bowl accurately to get rid of the likes of the in-form Lokesh Rahul and Chris Gayle.

On the other hand, despite being a place ahead, Punjab lag behind Mumbai in net run-rate. The Ravichandran Ashwin-led side, who started their IPL campaign on a rousing note, faltered in the business end of the league, losing five of their last six games. Punjab suffered their worst defeat of the season in their last outing when Royal Challengers Bangalore hammered them by 10 wickets, a game where both the batsmen and bowlers succumbed before Kohli’s men. Punjab’s batting mostly relies on openers Rahul and Gayle as the duo have accumulated 558 and 350 runs respectively. The Punjab openers have been a major reason behind their success as the two have handed a perfect start to their side on several occasions in this year’s edition. Karun Nair has been inconsistent with 247 runs so far, while veteran Yuvraj Singh and Mayank Agarwal are yet to make their presence felt in the middle-order. Punjab will be relieved by the fact that Aaron Finch returned to form with a 34 & 26 during the loss to Kolkata Knight Riders and RCB, respectively. In the bowling department, Australian pacer Andrew Tye (20 wickets) and Afghan teenaged spinner Mujeeb ur Rahman (14 wickets) have been brilliant. Pacer Ankit Rajpoot (eight wickets), off-spinner Ravichandran Ashwin (six wickets) and medium-pacer Mohit Sharma (six wickets) need to raise the bar against Mumbai, after going wicket-less against Bangalore.