Follow all the live action as Delhi Daredevils take on the Sunrisers Hyderabad in the IPL.

That's it then. Sunrisers Hyderabad win this one in the end by 7 wickets. Delhi will have themselves to blame here, some ordinary bowling and weird plans led to their downfall. Kane Williamson stays unbeaten in the end and what a cameo from Yusuf Pathan.

SIX! Is that the game then! Christian bowls a full toss and it goes all the way, now just 6 runs required off 4 balls.

Two runs from the first ball then, 12 runs required off 5 balls now..

So, 14 runs conceded from that over from Boult, that means Sunrisers require 14 off the final over. Dan Christian or Avesh Khan will bowl the final over here..

FOUR! After Yusuf survives, thanks to a review there, he hits the next one for a boundary. Boult really under pressure now, just 18 more required.

SIX! Is that the gamechanger then? Yusuf Pathan picks the slower ball there and deposits it into the crowd..22 required off 11 balls now..

Liam Plunkett with an excellent over there, concedes just 4 runs in that one but he has now bowled out. Interesting to see who bowls the final 2 overs along with Boult here. SRH are 136/3 after 18

WICKET! Plunkett gets the wicket, pressure off the asking rate succumbs Pandey you have to say. He is looking for the big one off the first ball but hits it straight in the air. Goes a long way up but Prithvi Shaw takes a good catch. Sunrisers are 132/2.

Trent Boult with a tidy over there but not getting the wicket Delhi need. Only 7 runs conceded from that over and SRH are 132/2 here. 3 overs left and 32 required to win

Delhi Daredevils are going with Boult for the 17th over here..interesting to see Boult bowl to his Kiwi captain Kane Williamson!

Short ball yet again, Avesh Khan being a bit too predictable here. Kane Williamson gets up and under it, showing his class and it goes for a six. SRH are 125/2 after 16 overs.

Big over for Sunrisers Hyderabad here, just what they required. Fist some confusion between the fielders which leads to a boundary, then one through the offside. 13-run over that and Sunrisers are 115/2.

Another tight over here from Plunkett, just 6 runs conceded from that over and the boundaries are becoming tougher to get for Sunrisers here. They are 102/2 after 14 overs.

STAT ATTACK: Just a reminder: the last boundary hit by SRH was in the 9th over (8.4) by Dhawan against Mishra. Other than the openers, no other SRH batsman has managed a boundary tonight so far.

Amit Mishra bowls out here and he ends with figures of 2/19, he has certainly been the stand out bowler here so far. Delhi would have liked another wicket, but it will also be interesting to see how they share the rest of the overs. SRH are 96/2 after 13 overs.

Manish Pandey has completed 4000 runs in T20s with that single! Great achievement..

Delhi just starting to pile on the pressure here, again just 6 runs conceded from that over of Plunkett. They are slowly starting to get back into the game. SRH are 92/2 after 12 overs

WICKET! Amit Mishra has got another wicket here, removes Shikhar Dhawan by tossing one up. Dhawan looks to go for the sweep but completely misses the ball. Dhawan departs for 33 and Sunrisers are 86/2. Game still wide open here.

So, halfway into the innings here and Sunrisers are 82/1 after 10 overs. Almost half way towards the target, they need 82 more of the remaining 10.

Kane Williamson has joined Shikhar Dhawan in the middle now, they will look to change strike and deal in singles..Delhi need another wicket quickly here..

WICKET! Amit Mishra tosses the ball up and gets it to spin, Hales can't believe it. Ball bounces and turns to clatter the off stump. Much required for Delhi, SRH are 76/1 and Hales departs for 45.

Dan Christian comes into the attack now and he starts well, using his experience and mixing the slower balls with the quicker ones. SRH are 68/0 after 8 overs.

Amit Mishra comes into the attack straight away after the power play, Sunrisers can affort to play him out safely if they target the other bowlers. Just 3 from his first one and SRH are 64/0 after 7

SIX SIX SIX! Avesh Khan is bowling fast and disappearing faster here. First Dhawan and then Hales getting the pull shot perfectly, the 50 partnership is up now with the third six. SRH are 61/0 after 6 overs

This is the big over Sunrisers Hyderabad needed in their chase, 11 runs come off Plunkett's first over. He strayed down the leg side a couple of time and paid the price for it. Sunrisers are 34/0 after 5 overs.

Glenn Maxwell now comes into the attack, he starts by conceding just 4 runs from his first over. Sunrisers Hyderabad are 23/0 after 4 overs, scoring below 6 rpo.

Boult concedes 8 runs from his second over here, the openers have started steadily but not exactly a flying start Hyderabad were hoping for. The pitch is expected to slow down. SRH are 19/0 after 3 overs.

So, 2 overs gone here and Sunrisers Hyderabad are 11/0 here. They have certainly started with caution here, Delhi though not helping their cause by dropping a catch.

DROPPED! Glenn Maxwell dropped an absolute sitter here, Hales looks to go big but gets a top edge there. Maxwell was never really settled and fumbles the catch. Might prove to be an expensive drop this. SRH are 10/0

FOUR! First boundary of the innings here, Avesh Khan a bit too short. The fine leg is up in the circle and Hales hits it over him. SRH are 5/0 after 1.2 overs. 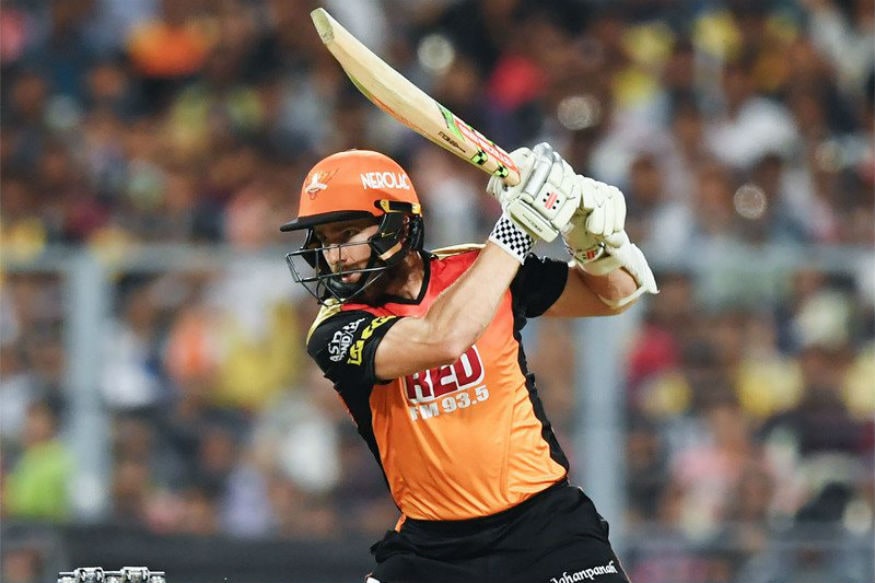 PREVIEW: able-toppers Sunrisers Hyderabad (SRH) will be aiming to cement their play-off berth when they take on a struggling Delhi Daredevils (DD) in an Indian Premier League (IPL) game at the Rajiv Gandhi International Stadium, here on Saturday. With six wins from eight games and 12 points in their kitty, Hyderabad boasts of one of the best bowling attacks in the ongoing IPL season. Delhi, on the other hand, has managed to carve out just three wins from nine games and are placed at the sixth place in points table. Skipper Williamson has carried Hyderabad's batting on his shoulders, amassing 322 runs from eight innings with an average of 46.The live telecast of the IPL 2018 match between Sunrisers Hyderabad and Royal Challengers Bangalore will start at 8 PM on May 5 (Saturday). The match can be seen live on the Star Sports network and live streaming will be available on hotstar.com. You can also follow the match live blog for ball-by-ball updates, full score and IPL match highlight on cricketnext.com.

However, Shikhar Dhawan and Wriddhiman Saha have not given the required support to Hyderabad's batting. Saha has been poor with the bat with just 79 runs from seven games while Dhawan has been a bit better with 152 runs from seven innings. Yusuf Pathan has also failed to fire on several occassions, a thing which he is known for. Hyderabad's strength mostly relies on their bowlers, who didn't let Bhuvneshwar Kumar's absence felt in last few matches as the medium-pacer is suffering a back injury. Williamson is however, hopeful that Bhuvneshwar will be fit for the game against Delhi.

The side has succeeded in defending low totals as they bundled out formidable Kings XI Punjab for just 119 in 19.2 overs while defending a target of 132. Earlier, while defending a modest target of 152, SRH bowlers restricted Rajasthan Royals' chase at 140. Spinners Shakib Al Hasan and Rashid Khan have bagged eight and 10 wickets each from eight games while medium pacer Siddarth Kaul has been the most impressive with 11 wickets from eight games. Another medium pacer, Basil Thampi, who has featured in just three games for Hyderabad, has emerged with clinical shows. The 24-year-old has five scalps. On the other side, Delhi cannot afford another defeat if they want a play-off berth. The side has performed well under new skipper Shreyas Iyer as Gautam Gambhir stepped down following Delhi's lacklustre start to the campaign. In their last clash against Rajasthan, Delhi came out victorious in a rain-affected tie. Young Prithvi Shaw, Iyer and stumper Rishabh Pant have been Delhi's batting mainstay even as their foreign recruits like Colin Munro and Glenn Maxwell have failed to fire.

While Shaw has 140 runs from four games, Iyer and Pant have amassed 307 and 375 runs respectively from nine games each. In the bowling unit, pacer Trent Boult has performed well in death overs, claiming 13 wickets from nine games. However, medium pacers Avesh Khan, Liam Plunkett, and spinner Shahbaz Nadeem need to step up and come out with their best to support Boult. Overall, it will be an uphill task for Delhi to stop a courageous Hyderabad side on Saturday.