Dhoni & Sons: From MS to Rishabh And Beyond

The man in yellow. The man who made a city yellow. It’s people yellow. It’s stadium yellow. It’s fans yellow. Painted. Even when tainted, still yellow. It was, wasn’t it? Yellow? A sea of. A splash of. A splurge. A song. It’s on your lips, say it? It was all yellow.

How will you remember the IPL, five-ten years from now? What of it, will always stay with you? What was that one night, that will shine brighter than all?

It won’t be who won, who scored how many, who knocked over how many batsmen. It’ll be about who was there.

Who continued to be there. Who was there, even when his team ceased to be.

The man in yellow. The man who made a city yellow. Its people yellow. Its stadium yellow. Its fans yellow. Painted. Even when tainted, still yellow. It was, wasn’t it? Yellow? A sea of. A splash of. A splurge. A song. It’s on your lips, say it? It was all yellow.

The play was cold. Calculated. As the perfect cricketing murder on a cricket field. To finish the other.

No matter what the build-up, the clues, the giveaways, the stand-my-grounds, the utter ridiculousness. No matter. It really didn’t matter.

The man would do what only he could do. Tease you, like he had so many times before. Kill you softly, with his cricketing cliché of a song.

Make you pull out your asthma inhaler. On the last ball of the 20th over again.

Nearly kill you again. You could be blue, red, orange, pink; yet how would you resist the man in yellow. IPL games aren’t supposed to stay with you. 8 pm, following day, you are already over the previous match. Its idiocy, miscalculations, bravado, dropped catches, required run rates, rants. That’s the price of binge watching. Unless.

Unless something else happens. Something that comes way out of the IPL script. A script written by the man in yellow.

“He’s leaving it too late again?”

“But you know why he’s doing that by now?” It’s maths. Probability. To increase the chances of a win.

“Surely by now he knows better; he could do it before, not so any more.”

Few batsmen hit boundaries from the get-go. Somehow, what makes these situations priceless is the recognition that they can’t. Even if they could, let’s just assume they can’t. That’s one of the probabilities taken into account.

And by the time these other batsmen make it to the crease, it’s nearly closing time. That’s added pressure; not an assumption, a given. So here you are; Dhoni’s partner who has just walked in – not only can he not smash it across the ropes on his first few balls; there are very few balls left.

You could be a batsman in 3D glasses, playing video games, Dhoni will not give you the strike. This is Dhoni’s realm, and he makes the rules. For real. Virtually too. Bravo to that.

After all these seasons of yellow, a fresh dash of blue is supposed to match up, what, even outshine?

So, when Dhoni chaperoned CSK to within one run of an unlikely win against RCB, who else but Pant was summoned. Likewise, for Dhoni when Pant stormed Jaipur’s citadel with four balls to spare. Barely a week since the World Cup squad was announced, Pant served himself a reminder. That beyond a wicketkeeper, beyond a comparison, he is a screechingly unique batsman – with a batting voice like few others in the game.

One that can only be silenced at its own behest. That doesn’t need to assault the first few balls to rip apart a big T20 score.

His technique was never pristine enough for the purists. Who’s that? Dhoni? Pant?

In Pant’s omission, the selectors may have done a huge service to the Delhi Capitals – within a week, he appears to have grown up. Gone is the backbencher’s tickled grin. Gone is the mischievous chalk thrower. Gone is the compulsive chirper too? Who knows what Pant has become or can become – in his game, is an assortment of unlikely angles and strokes, uncommon to most Indian batsmen.

While most India batsmen tend to play in the V, Pant has always picked the arc of his alphabet. His cricket is combative, it appears both brave and foolish – his game is high risk, to back him is not unlike investing in an exciting small cap working out of a shed.

Once upon a time, a few perceptive men, invested in small cap Mahi and made it the blue chip MS Dhoni that we know today. 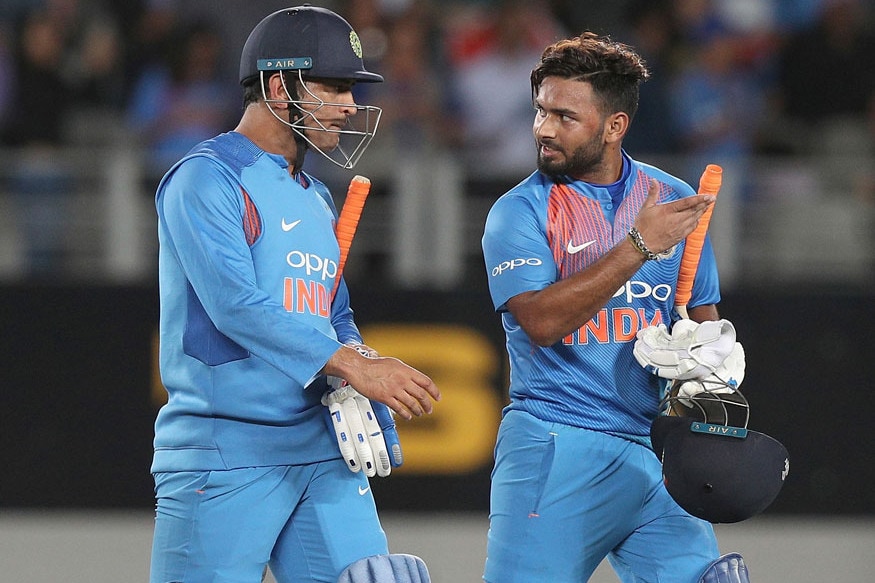 Rishabh Pant is 21. Dhoni pushing 38. Pant has played 5 ODIs, Dhoni 341. This is his 15th year in international cricket. While this is Pant’s third year, he is still not a mainstay in two out of three formats.

Until as recently as March this year, Pant was on track to make the World Cup squad – what went wrong? He played in India’s last two ODIs before the squad announcement – arguably his 36(24) and 16(16) were not enough.

Nor was the 23(19), the day before the squad was announced. Or the 46(31), a couple of days before that. IPL runs, though not quite finishing runs. More than all these runs, the slip-ups in those two ODIs, while keeping to spin may have cost him his spot.

In walked Chennai cousin, Dinesh Karthik, who didn’t score in his last ODI innings in late January. His 18(14) on squad-announcement eve, and 2(3) a couple of days before, didn’t deter the selectors either. Those 91 ODI games across 15 years, his T20 finishing form, keeping credentials, sealed the deal for DK.

As is often the case, the elders found comfort in the elders. The escape from Pant is temporary. Each game he plays in the IPL will be a reminder.

After CSK’s win on Tuesday night, Dhoni spoke of the returns on investment in Shane Watson. In spite of few scores of note, Watson was persisted with. Possibly because of the assured returns in the long run. Last year, he won CSK the title. Yesterday, he won them a game.

Watson is a tried and tested large cap. Yet in the IPL, few teams would’ve given Watson such a long rope. Watson said so himself. You know it too.

It’s time the Indian selectors, took a leaf out of CSK’s book. And took a punt on Pant. Isn’t that what Punter is doing?

Pant is not unlike Dhoni as a batsman. Both flam but equally unconventional and far from pleasing to the eye.

In the days and months that follow, Pant should extract whatever he can from the master. And hope that the man in yellow is up to some yeoman service.

After an entire generation of cricketers thanked Sachin, it could soon be Mahi’s turn to be thanked by upcoming wicketkeeper batsmen.

Welcome to Dhoni & Sons. Minds will open when questions are asked.