IPL 2020: A Look at Why KKR's Batting Has Struggled All Season

KKR were restricted to 84 for 8 against RCB in Abu Dhabi on the 21st of October. It was their second-lowest score in a completed IPL innings ever.

Kolkata Knight Riders (KKR) were restricted to 84 for 8 against the Royal Challengers Bangalore (RCB) in Abu Dhabi on the 21st of October. It was their second-lowest score in a completed IPL innings ever. It was also the lowest ‘non bowled-out’ score by a team batting first in IPL history! KKR have been very ordinary with the bat in the tournament and it is one of the primary reasons why the two time former champions are struggling to hold on to that crucial number 4 spot in the points table. KKR have an average score of 152 in the 9 matches they have faced the full quota of 20 overs. That is equivalent to a run rate of 7.6. A score of 160 (run rate of 8) is generally considered par in contemporary T20 cricket. This suggests that, on the whole, KKR has been below average in IPL 2020.

Their 5 losses include two scores between 140-150, a 112 and an 84! Even three of their wins which came batting first were courtesy the fightback by their bowlers and terrible batting by the opposition - KKR were barely able to defend against CSK, KXIP and SRH - in all these matches, batting first, they had again managed to put a par total of between 160 and 170.

KKR’s lowest moment with the bat came against RCB in Abu Dhabi where they were restricted to 84 for 8 - only the third time in their IPL history that they have scored less than 100 in a completed IPL innings. 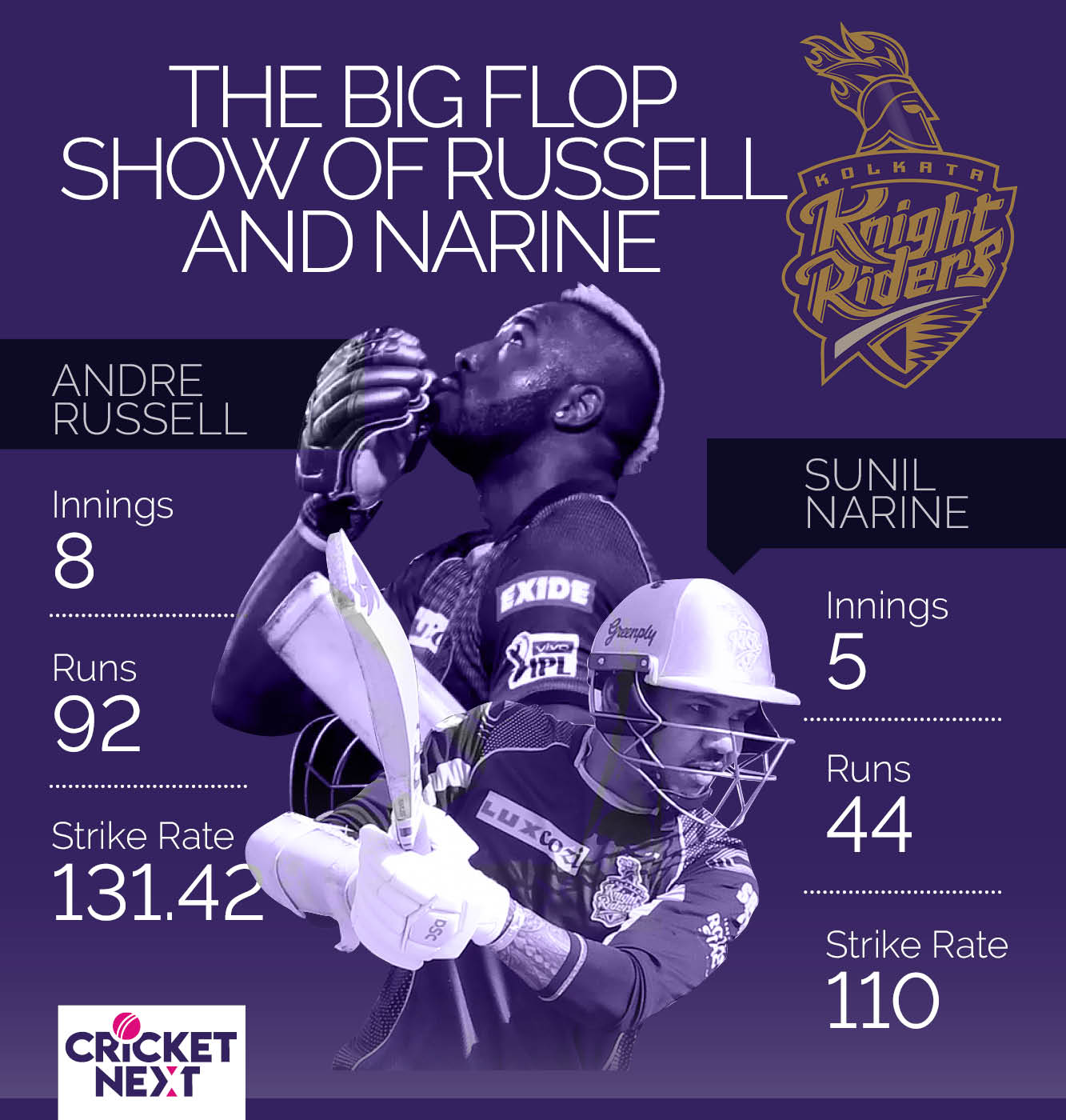 THE FAILURE OF NARINE AND RUSSELL

Sunil Narine and Andre Russell did not feature in the playing XI against RCB - for the first time since 2012 that a KKR XI did not feature the two destructive all-rounders. Both of them have been in terrible form in IPL 2020. Russell has scored just 92 runs from 8 innings at a strike rate of 131.42 in the tournament.

He has got several opportunities to make a difference but has failed in all the matches. He looks tentative at the crease - a man trying to get some sort of connection on the ball - a far cry from the annihilation he caused in 2019! Pat Cummins has scored more runs for Russell in the same number of innings this season - this statistic sums up the batting for KKR!

Russell was the highest scorer for KKR and the fifth-highest overall in IPL 2019 with an aggregate of 510 runs in 13 innings at a phenomenal strike rate of 204.81. Russell has a strike rate of 181.72 in the IPL - the highest in the league’s history! Clearly, a different man has taken the field this time around.

Narine, with 163.65, has the second-highest strike rate in IPL history (min. 500 runs) but has managed to aggregate just 44 runs in 5 innings at a strike rate of 110 in this tournament.

The failure of Narine and Russell with the bat - one at the top of the order and the other lower down, their two world-class and devastating all-rounders - has had a huge impact on KKR. Neither are they getting the starts in the powerplay nor the flourish at the death. While Dinesh Karthik and Eoin Morgan have a strike rate in the 120s - poor for this format for middle-order batsmen, Shubman Gill, who has been forced to play the role of the anchor has only scored 111.82 runs per hundred deliveries.

Gill has been guilty of playing too many dot deliveries. Even as an opener who is anchoring the innings and keeping one end intact, the par strike rate is between 120 and 130 - Gill is far below the norm.

KKR find themselves in a precarious position. Although they are positioned at number 4 with 5 wins and as many losses from 10 matches, they do not seem to carry any momentum and look easily beatable. With teams like Kings XI and RR fighting back and eyeing that fourth playoff spot, the task is cut out for KKR.