We look at some of the records broken and milestones set, emerging trends and players and teams who stood out during the first 9 days of IPL 2020. What a riveting end to the weekend after what has been an entertaining and interesting first 9 days of the IPL 2020 in the United Arab Emirates.

Rajasthan Royals (RR) chased down the highest total in the history of the IPL against Kings XI Punjab in Sharjah on Sunday (September 27) as records tumbled in the desert city of the Emirates.

We look at some of the records broken and milestones set, emerging trends and players and teams who stood out during the first 9 days of IPL 2020. 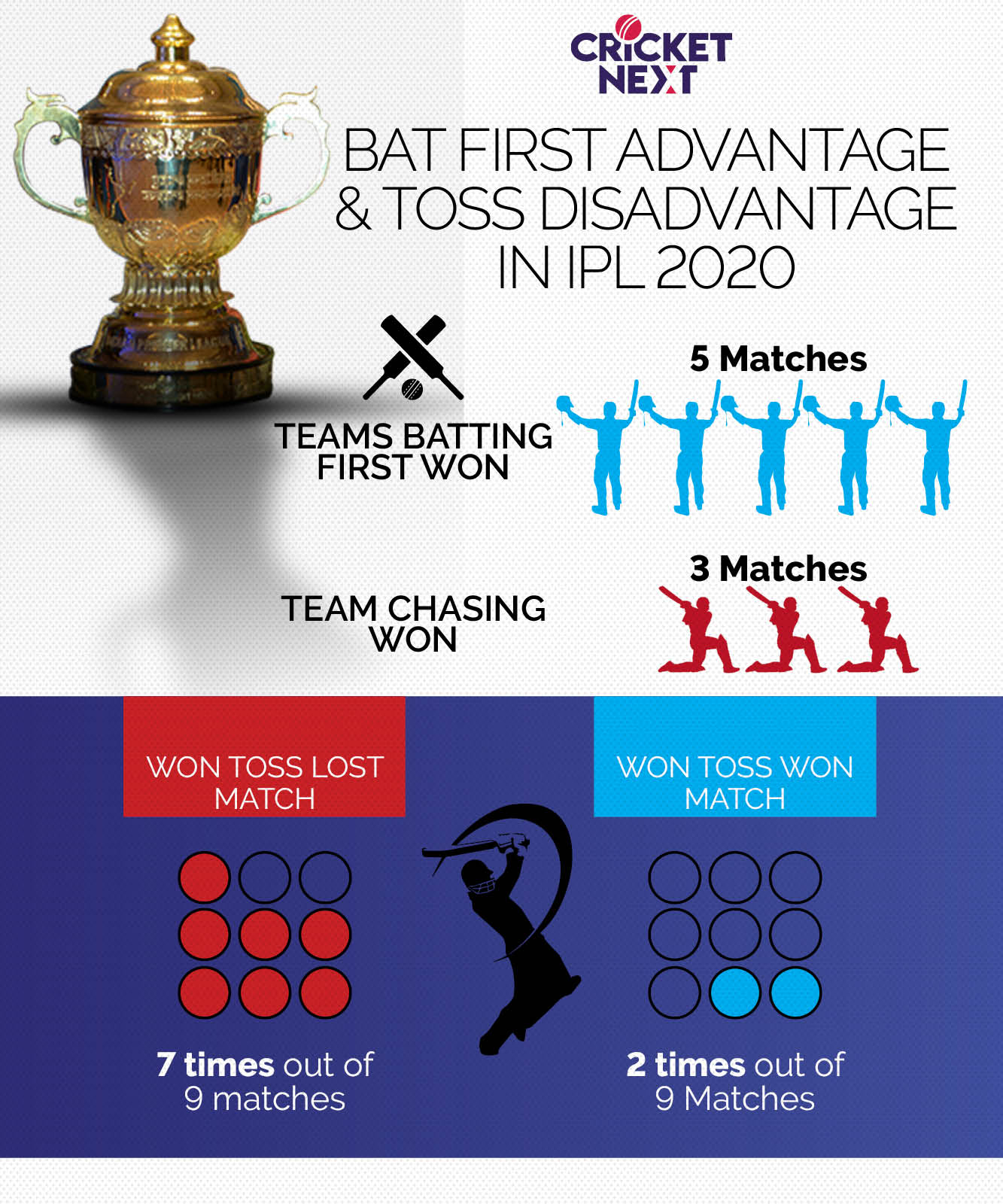 The team batting first has won 5 of the first 7 matches (one ended in a tie). The equation was somewhat balanced on the weekend with KKR chasing down SRH’s total of 142 in Abu Dhabi and the Royals’ record chase against Kings XI at Sharjah.

So its 5-3 batting first after the first 9 matches.

Early days still but if the trend continues, it will be against the historic pattern of the IPL where in as many as 10 of 12 seasons the team chasing has been more successful. In 2019, the team batting second won 35 of the 57 matches (61.4%).

Interestingly, the team winning the toss has lost 7 of the 9 matches. The two aberrations were CSK’s chase in the tournament opener against MI and RR’s record chase against Kings XI.

The main reason for this could be the neutralization of the home advantage. There are no home or away venues in this IPL and no team is quite sure of what conditions to expect at the three venues. Sharjah has seen two high scoring matches so far with all four team totals in excess of 200. RR seem to have gained early advantage and a hang of the conditions winning both their matches at the venue. KL Rahul, Mayank Agarwal and Sanju Samson have been the three batting stars of the IPL 2020 thus far.

Rahul has become a run-machine in the IPL and is currently the highest aggregate scorer of this year’s edition too with 222 runs from 3 matches at a strike rate of 156.33. His record-breaking unbeaten 132 against RCB in Dubai was the highest score by an Indian batsman in the history of the IPL.

He also became the fastest Indian to 2000 IPL runs reaching the landmark in his 60th inning breaking the record of Sachin Tendulkar (63 innings).

Mayank Agarwal is the second-highest scorer of IPL 2020. He was sensational against RR, albeit in a losing cause, smashing a breathtaking 106 off just 50 deliveries – a knock that included 10 fours and 7 sixes!

The fact that Sanju Samson has been even more destructive than Rahul and Agarwal and scored his runs at a strike rate of 214.86 is an indicator of his batting prowess and talent. A 32-ball 74 against CSK with 9 sixes followed by a 42-ball 85 (with 7 sixes) against KXIP in a stunning chase – Samson, with two Player of the Match Awards in two matches has been simply outstanding!

RR chased down 223 set by Kings XI at Sharjah – it was the highest total chased down in the history of the IPL. RR broke their own record – they had overhauled 214 set by Deccan Chargers in the inaugural edition in 2008.

The 183 run stand between KL Rahul and Mayank Agarwal in this very match is the third-highest stand for the opening wicket and the 8th highest overall in the history of the IPL.

Injuries to Suresh Raina, Ambati Rayudu and Dwayne Bravo seem to have taken a toll on CSK’s middle order. They have looked completely out of sorts in two of their three chases – when the asking rate was above 8.5.

With the openers not firing and MS Dhoni adopting strange and delayed tactics of acceleration, the onus of the batting is completely and solely on Faf du Plessis.

They might still prove everyone wrong but early signs indicate that this could be the first time in their IPL history that CSK do not qualify for the playoffs!