Mumbai Indians will face off against Delhi Capitals in the final of the IPL 2020 in Dubai. The MI vs DC final is scheduled to be played on November 10 at the Dubai International Cricket Stadium. While Mumbai will eye their fifth trophy, it will be Delhi's first chance to take the trophy home. Here’s a look at the Mumbai's journey to the playoffs in the Indian Premier League in the season: 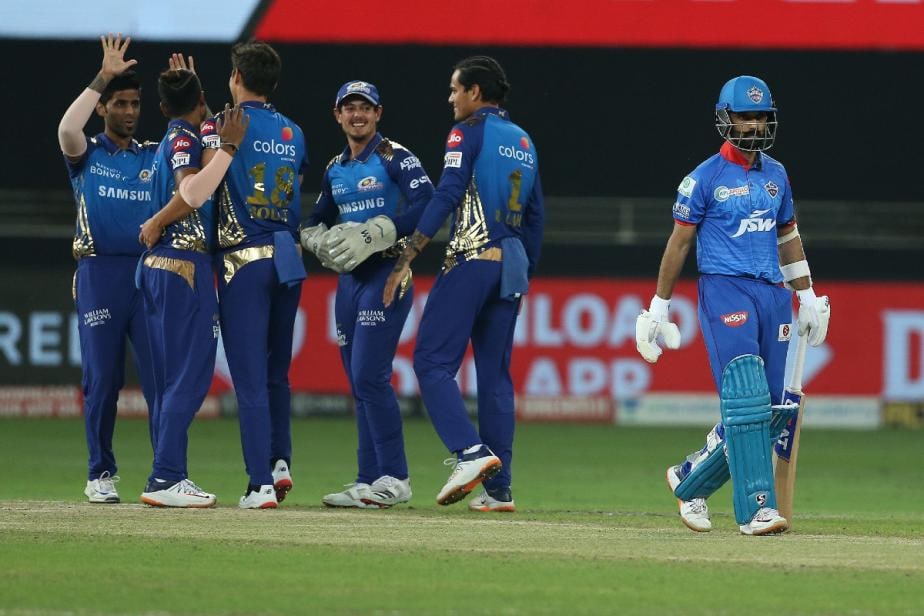 Mumbai Indians will face off against Delhi Capitals in the final of the IPL 2020 in Dubai. The MI vs DC final is scheduled to be played on November 10 at the Dubai International Cricket Stadium. While Mumbai will eye their fifth trophy, it will be Delhi's first chance to take the trophy home. Here’s a look at Mumbai's journey to the playoffs in the Indian Premier League in the season:

Mumbai Indians played against their arch-rivals Chennai Super Kings in the opener of the season in Abu Dhabi. By dismissing six batsmen for just 35 runs, CSK restricted their opponents to a decent total which they easily managed to chase with four balls to spare.

MI went against Kolkata Knight Riders at the Zayed Cricket Stadium, Abu Dhabi. The team went to bat first putting up a formidable total of 195 on the board. Jasprit Bumrah, Trent Boult and Rahul Chahar picked up most wickets, restricting the KKR chase to 146.

MI locked horns with Royal Challengers Bangalore, putting up a total of 201 leading to the first Super Over of the season. RCB beat Mumbai Indians 7 for 1.

The Mumbai based outfit and Kings XI punjab clashed in Match 13. Mumbai Indians defeated KXIP by 48 runs. MI skipper Rohit Sharma’s 25 ball 70 was a key highlight of the game.

Mumbai Indians clashed with Rajasthan Royals and once again put up a total of over 190 on the board. Suryakumar Yadav’s unbeaten 79 off 47 helped MI to register another consecutive win. They won against RR by a huge 57 runs.

DC went to bat first and managed to put up 162 on the scoreboard. With Suryakumar Yadav’s 53 from 32 and Krunal Pandya picking up two crucial wickets, MI won by 5 wickets and 2 balls to spare.

There were back to back wins for Mumbai Indians in the first half of the tournament. In their second clash with KKR in Abu Dhabi, MI registered another spectacular victory by 8 wickets with the help of in-form Quinton de Kock.

Mumbai Indians encountered Kings XI Punjab for the second time in the season. The two sides went for a Super Over eliminator after the match was tied. With this, KXIP ended MI’s winning streak.

It was arch rivals Mumbai Indians vs Chennai Super Kings at the Sharjah Cricket Stadium, Sharjah. This was their second clash in the tournament, however, this time MI defeated CSK by 10 wickets, chasing 116 in just 12.2 overs.

Rajasthan Royals effectively chased the target put up by MI in Abu Dhabi. The team lost to Royals by 8 wickets, mostly because of Ben Stokes’ impressive century. He was Man of the Match for 107 not out.

Mumbai Indians made a comeback against Royal Challengers Bangalore in Abu Dhabi. Suryakumar Yadav’s most memorable knock of the season took his side home. MI won by 5 wickets.

Mumbai Indians clashed with Delhi Capitals in Dubai. DC faced a cheap loss from the table toppers who won by 9 wickets. In-form Ishan Kishan knocked 72 from 47 for his team.

In their second clash of the season, MI and Sunrisers Hyderabad played in Sharjah. SRH ensured to take the must win match home. With David Warner and Wriddhiman Saha’s great partnership, SRH made it to the top four. This was the second time after 2011, MI lost a game by 10 wickets.

In a lop-sided match, Mumbai ran over Delhi and won the match by 57 runs. Suryakumar Yadav and Ishan Kishan scored fifties, while the difference was Hardik Pandya's 37 from 14 balls. Mumbai ended with a score of 200/5.