IPL 2020: Five Reasons for CSK's Worst Ever Performance in the Tournament

Chennai Super Kings are out of the race for a berth in the playoffs in IPL 2020. Here, we look at 5 reasons for why it went wrong for CSK this year. 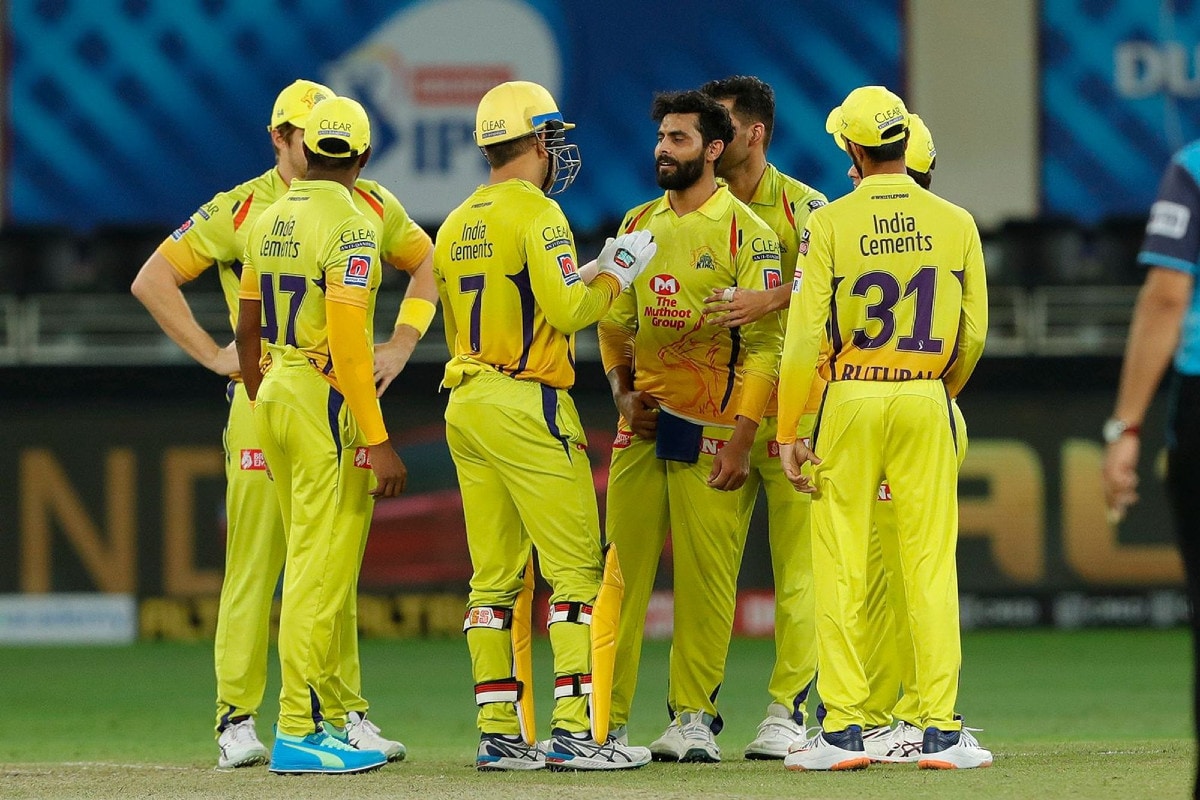 How the mighty have fallen! It has all gone crashing down, and very quickly for Chennai Super Kings (CSK) in the Indian Premier League (IPL) 2020. They were restricted to a paltry 114 for 9 by Mumbai Indians (MI) at Sharjah with 5 of their top 6 batsmen registering single-digit scores - it was CSK's worst performance of the season and amongst their 10 worst in the IPL overall! MI powered to a crushing victory by 10 wickets with 46 deliveries to spare. It was CSK's first 10-wicket loss in their IPL history. In terms of balls remaining in the second innings, it was also their worst defeat.

In many ways, it summed up what has been a disastrous IPL campaign for the three-time former champions. CSK have lost 8 of their 11 matches so far this season. Their win percentage of 27.27% so far this year is, by far, the lowest for any edition of the IPL. In none of the previous editions, did it fall to below 50% - that is how dominant and good they were. It also means, that for all practical purposes, CSK are out of the race for a berth in the playoffs in IPL 2020. Mathematically it is still possible but highly improbable.

So what went wrong for CSK this year? We look at 5 reasons. 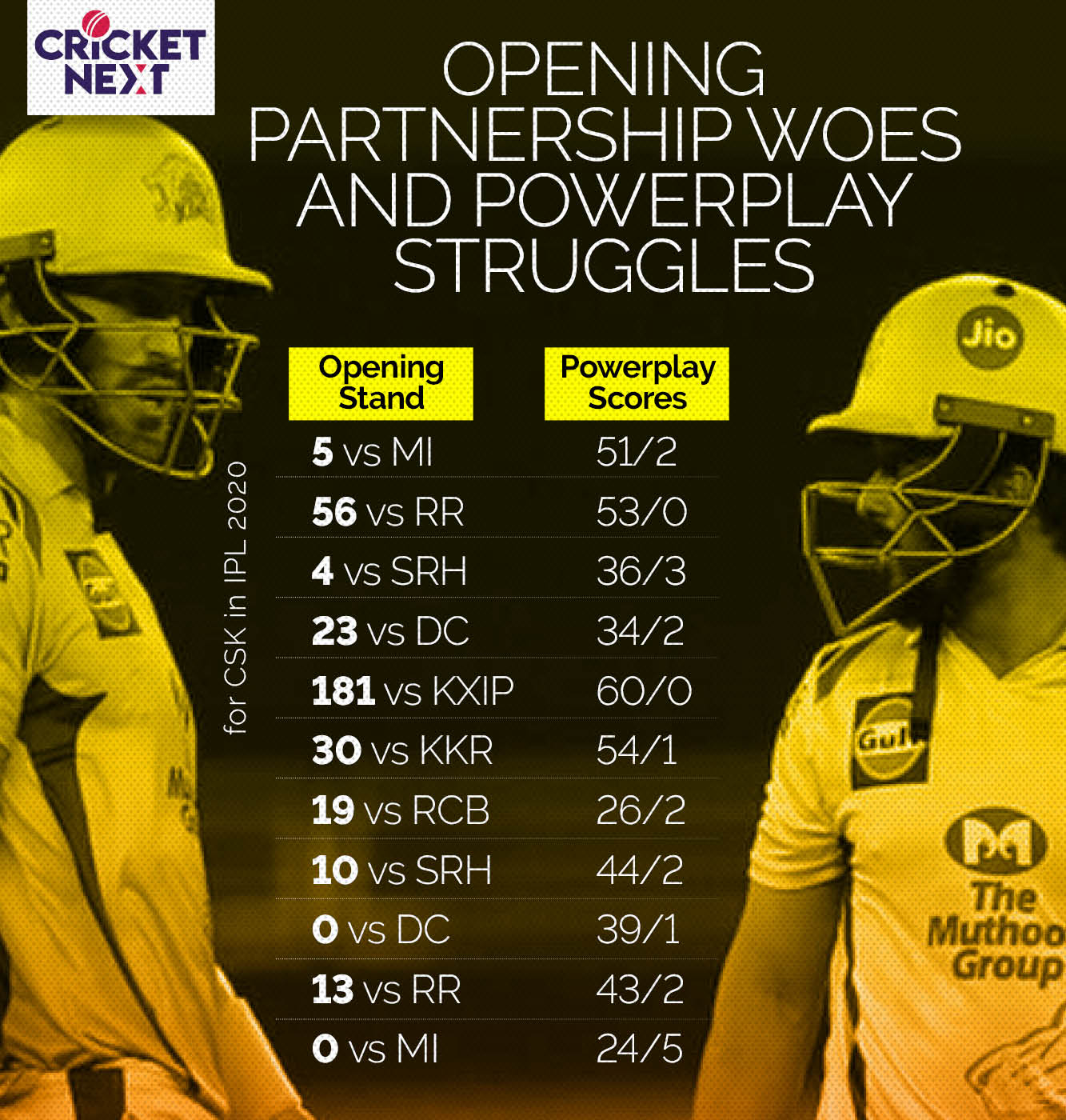 Faf du Plesssis has been CSK's best batsman of IPL 2020 and also their highest run-getter. But the indifferent form of Shane Watson and Murali Vijay meant that CSK has not been able to get the starts they wanted at the top of the order - neither have CSK got the impetus in the powerplay consistently nor has their opening stand been solid enough to provide a base to the middle order.

CSK have lost at least two wickets in the powerplay in 7 of the 11 matches they have played so far in the tournament. They have scored less than 45 or a run rate of 7.5 in an equal number of matches. Of course, they were 24 for 5 after the first 6 overs in their second match against MI - their worst performance not only of the tournament but in their IPL history!

As many as on 6 occasions, the opening wicket partnership was of 15 or below - poor for this level and CSK's own high standards. Shane Watson has been a patch of the great destructive batsman he has been in the IPL. He has had 5 scores of below-15 in the tournament out of 10 innings - that is a failure rate of 50%. His strike rate of 125 was also poor for a batsman of his calibre and hitting prowess. Dwayne Bravo and the young and talented, Ruturaj Gaikwad have barely managed to occupy the crease in the few innings they have got a chance with the bat in the competition.

The biggest disappointment for CSK, though, has been the form and attitude of their skipper, MS Dhoni. The Indian and CSK legend has an aggregate of 180 runs in 10 innings at a strike rate of 122.44 - given that he has batted in the middle and lower order, that is an exceptionally unsatisfactory performance. Dhoni gave up the chase and did not go for the target in rather strange tactics against the Royals, was again slow and could not finish the match against SRH and has not provided any flourish in the middle order or death in any of the remaining matches. 15 off 12 balls, 11 off 12, 10 off 6, 21 off 13, 3 off 5, 28 off 28 and 16 off 16 - there has not even been one Dhoni-type cameo in the entire tournament! As a result, CSK have suffered and not had any impetus at the death.

JADEJA'S FAILURE WITH THE BALL BIG BLOW FOR CSK 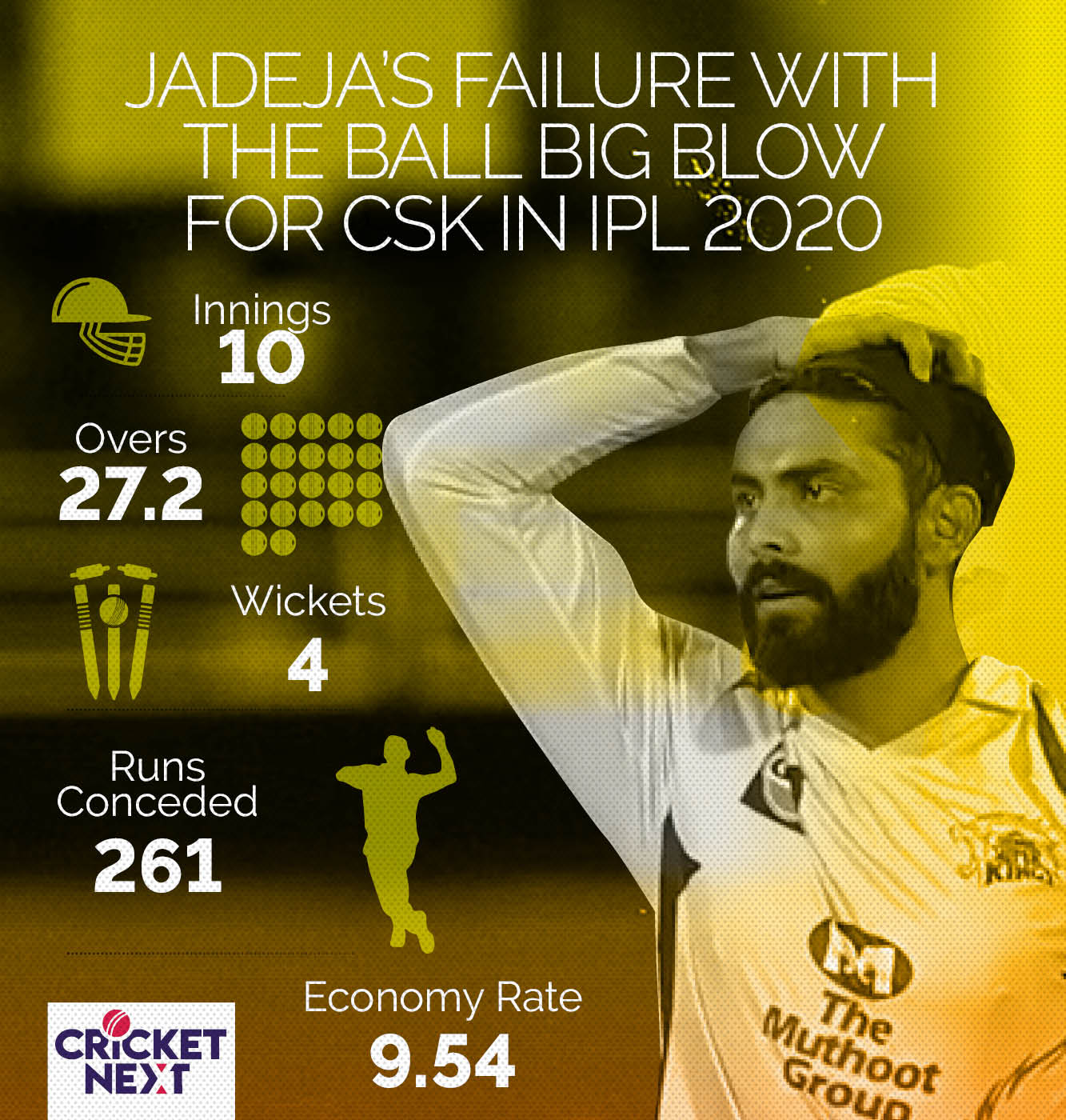 ​Ravindra Jadeja picked 15 wickets from 16 matches in IPL 2019 and was the second-most restrictive bowler of the tournament with a phenomenal economy rate of just 6.35. It was his spell in the middle overs which choked the opposition batsmen and made run scoring very difficult.

That Jadeja has not turned up in the Emirates in 2020.

He has been in very ordinary form with the ball in this edition picking just 4 wickets in 10 innings. More significantly, he has been tonked for 9.54 runs per over and is one of the most expensive bowlers of the tournament. As a result, CSK have found it difficult to control the passage of play in the middle overs.

CSK have been able to dismiss the opposition only once in the tournament - they bowled out KKR for 167 in Abu Dhabi. On as many as 7 occasions they have not been able to take more than half of the opposition wickets. This lack of wicket-taking prowess or poor strike rate has been a major problem for CSK in IPL 2020.

Only the highest wicket-taker of one team - KKR - has lower wickets than the highest wicket-takers of CSK in the tournament - Deepak Chahar and Sam Curran (10 wickets each). This further emphasizes CSK's lack of ability to penetrate the opposition batting line-ups - unlike the other franchises, they haven't had a tear away fast bowler nor a world class spinner doing the job for them.

Imran Tahir was the highest wicket-taker of IPL 2019 with 26 wickets in 17 matches at a strike rate of 14.8. He was also very restrictive with an economy rate of just 6.69 runs per over. With wicket-taking a big issue for CSK they should have brought in the attacking leg spinner in their mix much earlier in the tournament. But as things stand he has only played one match for CSK this season - their last one against MI.

With no world class fast bowler in the XI and with the injury to Dwayne Bravo keeping him in and out of the side, CSK should have given Josh Hazlewood more opportunities with the ball. The Australian would have brought control and discipline and help keep the opposition run rate in check. Hazlewood has only played 3 matches for them in the tournament.

History is in the making in IPL 2020. And CSK are on the wrong side of it. In all likelihood it will be the first time that CSK will not make it to the playoffs of an IPL tournament they participated in.