Delhi Capitals (DC) were ruling the roost in the Indian Premier League (2020) till almost two-thirds into the tournament. They had won 7 of their first 9 matches and were playing see-saw with Mumbai Indians between the top two positions. They had the most balanced side in the competition. Or so it seemed!

Prithvi Shaw was firing on all cylinders at the top of the order in the first half of the tournament. The skipper, Shreyas Iyer was playing the role of the playmaker. Shikhar Dhawan‘s transformation from accumulator to aggressor saw him amass two hundreds in the tournament and he was only behind KL Rahul on run aggregate. Marcus Stoinis was perfecting the role of the finisher. Kagiso Rabada was the best bowler and the leading wicket-taker of IPL 2020 and was being brilliantly supported by Anrich Nortje who was scaring and intimidating batsmen with his accuracy and pace. And their unsung hero, Axar Patel, was choking the batsmen in the middle overs stifling the opposition and not giving away any free runs.

And then suddenly, it all went horribly wrong! 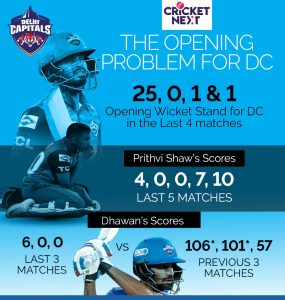 DC have lost 4 matches in a row and from a great 7-2 position are now in a precarious situation at number 3 in the points table with 7 wins still but 6 losses. Their Net Run Rate at -0.159 is lower than SRH (0.555) and Kings XI Punjab (-0.133) – two strong contenders who can overtake DC with wins in their last matches. Of course, DC can still qualify on their own if they win their last encounter – but it is against the number 2 side of the IPL – RCB – who will also be desperate for a win after a slump of their own – and thus will not be easy!

So what has happened to DC? Why have they squandered their great position? We outline 5 reasons for their dip in numbers in the last 4 matches:

1. THE FAILURE OF BOTH THE OPENERS

25, 0, 1 and 1 – these are the opening-wicket stands for DC in the last four matches in the tournament. Contrast these with the opening-wicket stands from match 2 to match 5 for DC – 94, 2, 56 and 68. Prithvi Shaw was in great form in the first half of the tournament. But in a dramatic fall in form has registered scores of 4, 0, 0, 7 and 10 in the last 5 matches. The problem has got compounded for DC as their Mr Dependable and batsman of the tournament, Shikhar Dhawan, has also suddenly gone off the boil in the last three matches registering scores of 6, 0 and 0. This has come as a great shock to DC who were highly dependent on the Indian southpaw at the top of the order. He had recorded scores of 106*, 101* and 57 in his previous three matches.

Rishabh Pant of IPL 2020 has been a patch of the destructive batsman he has been in the last few years in the IPL. His struggles have continued in the last few matches and only added to DC’s batting woes in the middle order. 14 off 20 balls, 27 off 33 balls, 36 off 35 balls and 21 off 24 balls – It is not that Pant has not got enough opportunities – in fact, he has got starts in all these matches (last 4 matches DC has lost) but has never really got going and stepped foot on the accelerator.
Pant’s strike rate of just 87.5 in these matches is poor. Not only has he not played any match-winning innings but wasted deliveries in the middle order and failed to come up with even one cameo which are quintessential with Pant! DC was relying heavily on their star middle-order batsman to provide the flourish at the death. It hasn’t happened this year for Pant and it is now hurting his team’s chances.

3. STOINIS AND HETMYER STRUGGLE IN THE MIDDLE ORDER

Marcus Stoinis and Shimron Hetmyer had come up with a few cameos and flourishes at the death in the first half of the tournament but have completely gone off the radar in the last few matches. They have an aggregate of 69 runs in 8 innings between them in the last 4 matches. This is adding to DC’s middle order woes.

Kagiso Rabada has been one of the bowlers of the tournament with 23 wickets from 13 matches. He has been DC’s Mr Dependable with the ball providing the breakthroughs with the new ball and at the death. He had been fairly restrictive in the tournament too. But the South African speedster has had a couple of bad matches going wicketless in these encounters. He was also taken for aplenty conceding 27 runs in his 3 overs against Mumbai Indians and 54 off his 4 overs against the Sunrisers – the sixth-most expensive figures for DC in the IPL!

5. AXAR NOT AS RESTRICTIVE AND PROBLEM AGAINST LEFT-HANDERS

Axar Patel has been DC’s spinner of the tournament. He has choked the opposition batsmen in the middle overs and given nothing away maintaining a tight line and length and discipline. His economy rate of 6.13 is the third-best in the tournament only after Rashid Khan and Washington Sundar. But Axar bowled only one over against KKR as they had three left-handers in their top 6 and the slow left-arm orthodox bowler would be easy pickings with the turn. For the same reason he did not find a place in the XI against MI as they had as many as 4 left handers in the top 5. Axar was also taken for a few by SRH conceding 36 runs in his 4 overs. Axar’s dip in form/not being in the XI/bowling less overs to teams studded with left-handers is a huge concern for DC as he is their main bowler in the middle overs. This has affected them adversely in the last few matches.