With the 13th edition of the Indian Premier League (IPL) set to begin in the UAE from September 19, we look at some interesting numbers and records of Mumbai Indians.

With the 13th edition of the Indian Premier League (IPL) all set to begin in the UAE on September 19, we look at some interesting numbers and records for each of the 8 participating franchises.

We had analyzed the numbers behind CSK in the opening piece.

In this piece we look at some stats which define the performance of the most successful team in IPL history – Mumbai Indians.

4: Number of IPL Titles. MI won the IPL in 2013, 2015, 2017 and 2019. It is the most successful IPL team in history. Interestingly, MI seem to follow a pattern of winning the title every alternate year from 2013. They will have to break that trend to lift this year’s trophy! Overall, MI have made it to 5 finals and won 4 of them.

58.29%: Percentage of Matches Won in the IPL. MI is at number 2 on Match-Win percentage. CSK has the highest win percentage in IPL history. 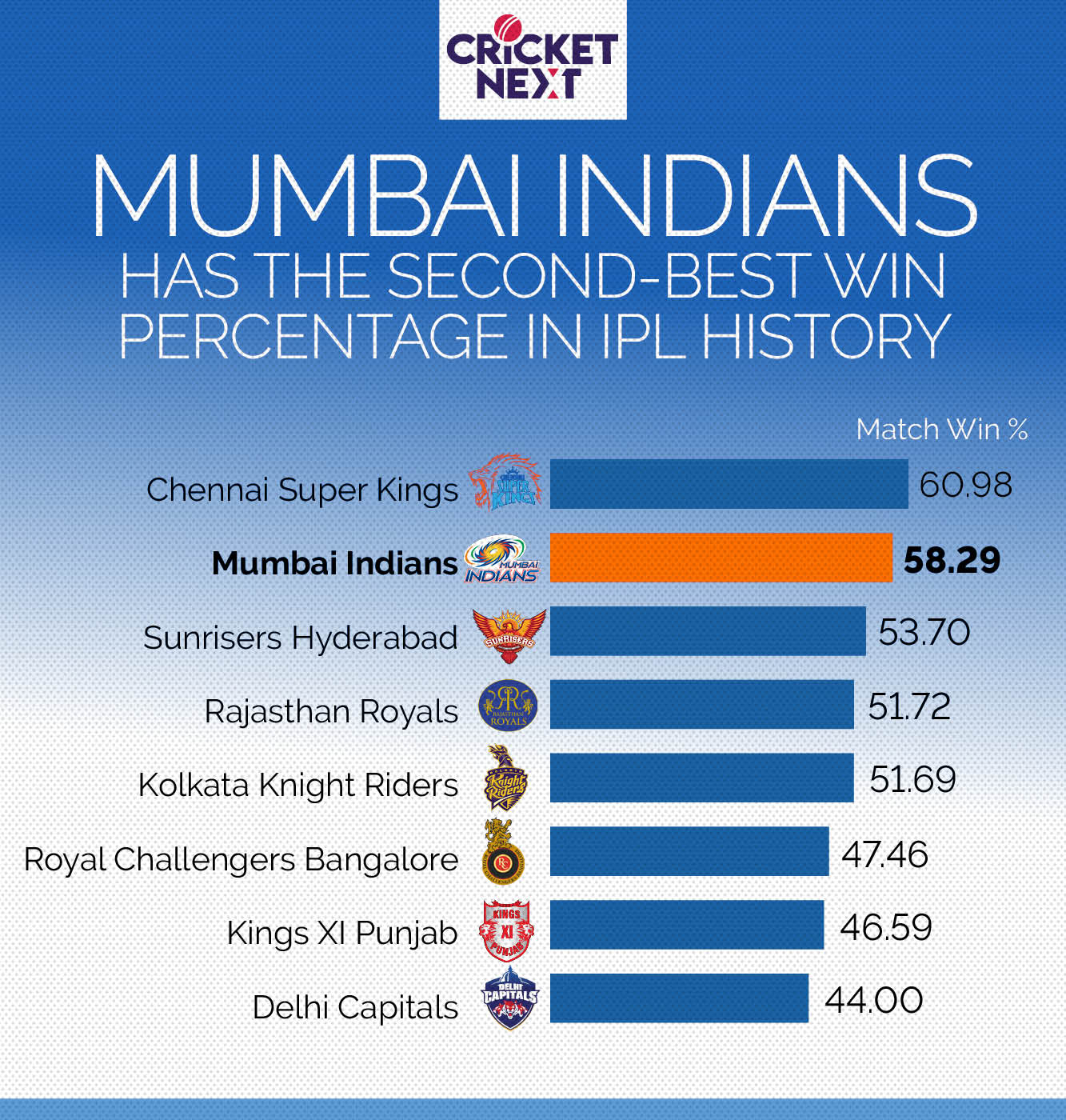 76%: Maximum Win Percentage (min. 10 matches) against a team (vs KKR). MI has dominated its contest against KKR – two-times IPL champions and heavyweights of the tournament – having won 19 of the 25 matches against them.

60.71%: Win Percentage against CSK. MI has also dominated the second-most successful franchise, CSK having won 17 of the 28 matches between the two sides. CSK has the best win percentage, the best record in playoffs and is the most consistent team in IPL history. It is commendable for MI to boast of such a record against both CSK and KKR. 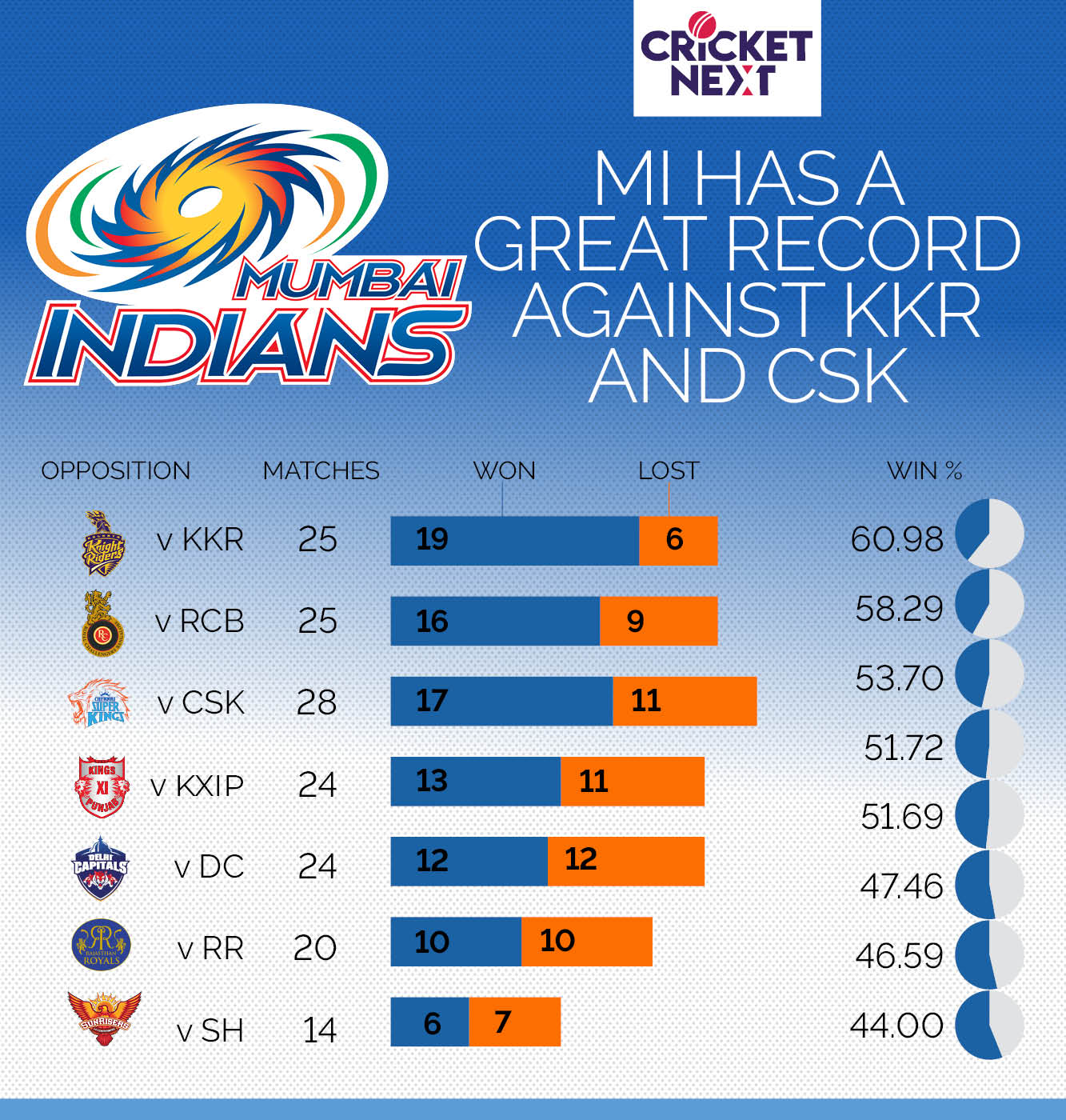 187: Maximum Number of Matches in IPL history. No team has played more Matches in the IPL than MI.

4/10: Highest Team Totals against DD. 4 of MI’s top 10 team totals in the IPL have come against Delhi Daredevils.

146: Largest Margin of Victory (vs DD in Delhi in 2017). MI hammered 212 for 3 with fifties from Lendl Simmons and Pollard. A superb all-round display with the ball helped them rout the Daredevils for a paltry 66 handing MI a mammoth 146-run win. It is the largest margin of victory for any franchise in IPL history!

2: Number of Tied Matches (vs Gujarat Lions in Rajkot in 2017 and SRH in Mumbai in 2019). MI were victorious in both the matches in the one-over eliminator. 34.83: Best Batting Average (Indian batsman) – Sachin Tendulkar. Tendulkar scored 2334 runs in 78 matches for MI playing the role of the accumulator as indicated by his strike rate of 119.81.

4: Number of Hundreds for MI in the IPL. Jayasuriya, Tendulkar, Simmons and Rohit Sharma have scored one hundred each.

114*: Highest Individual Score in a Match – Sanath Jayasuriya (vs CSK in Mumbai in 2008). Jayasuriya slammed 114 in just 48 deliveries smashing 11 sixes in his power-packed innings.

4/10: Maximum Number of 200-plus strike rate innings in Fastest 10 for MI – Kieron Pollard

618: Highest Aggregate in a Series – Sachin Tendulkar (2010). Tendulkar was the leading run-getter in the 2010 edition with 618 runs in 15 innings at a strike rate of 132.61. Remarkably, Tendulkar also has the second-highest aggregate runs for a season for MI – he scored 553 runs in 16 matches in 2011. Thus, for two successive seasons, Tendulkar was the highest run-getter for MI. 170: Maximum Number of Wickets – Lasith Malinga. Malinga is the leading wicket-taker in IPL history with 170 wickets in 122 matches at a strike rate of 16.6 and economy of 7.14.

6-12: Best Bowling Figures in an Innings – Alzarri Joseph (vs SRH in Hyderabad in 2019). These are the best bowling figures in IPL history!

8: Least Runs Conceded in complete quota of 4 overs – Mitchell Johnson (vs Pune Warriors in Pune in 2013)

58: Maximum Runs Conceded in complete quota of 4 overs – Lasith Malinga (vs Kings XI in Indore in 2017)

7: Most Number of 4-plus Wickets in an Innings – Lasith Malinga 167*: Highest Partnership for MI for any Wicket – Herschelle Gibbs and Rohit Sharma (vs KKR in Kolkata in 2012). Rohit Sharma has featured in 3 of the top 5 partnerships for MI in the IPL.

59.62%: Rohit Sharma’s Win Percentage as Captain of MI. Rohit has led MI to victory in 62 (including two tied matches) of the 104 matches he has captained the franchise. It is the best win-percentage for any MI captain and the second-best of all time (min. 30 matches as captain) marginally behind Dhoni (60.11%)

AN ALL TIME MI XI: