RCB's Achilles' Heel in the past, won 7 off their first 10 matches and looked certain to guarantee themselves a spot in the playoffs of the IPL 2020. The Royal Challengers Bangalore (RCB) with a more balanced squad and significantly a potent bowling unit, their Achilles' Heel in the past, won 7 off their first 10 matches in the tournament and looked certain to guarantee themselves a spot in the playoffs of the Indian Premier League (IPL) 2020. But like Delhi Capitals, they have had a sudden change of fortunes, lost their last three matches and find themselves in a spot of bother. RCB still have 7 wins but have now lost 6 matches and need to win their final encounter against the Capitals to secure a playoff berth. A loss in that match may severely jeopardize their chances of qualification.

So how have RCB, after doing so well, managed to find themselves in this position?

The main reason is their continuing over dependency on the star duo of Virat Kohli and AB de Villiers.

Kohli and AB are two of the greatest batsmen not only in the IPL but in the history of international cricket and it is natural for any team to be dependent on their two superstars. But without a lack of contribution from other batsmen this dependency turns into a burden. It works well when both of them are on song or even one comes up with a standout performance - more often than not RCB wins - but they are also human and will have dips in form. When that happens it puts enormous pressure on the other batsmen in the XI and they crumble leading to the team's downfall.

Unlike previous editions, two things happened for RCB in IPL 2020 which reduced the expectancy on AB and Kohli - the emergence of another batsman contributing significantly in the top 3 - Devdutt Padikkal is the second-highest scorer for RCB this season with 422 runs in 13 innings including 4 fifties. And a better fast bowling unit. A combination of all these meant that a resurgent RCB were all set to make the playoffs for the first time since 2016.

Also Read: IPL 2020, RCB vs SRH in Sharjah Highlights: As it Happened

But the old problems have returned to hound them once again and a closer look at the numbers show how much RCB still relies on AB and Kohli.

RCB's OVER DEPENDENCY ON AB-KOHLI 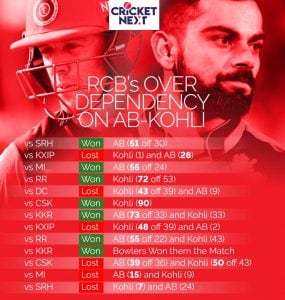 vs KKR Won Bowlers Won them the Match

Although both of them scored runs against CSK in Dubai, their combined strike rate of 112.66 was below par and with no contribution from the lower middle order - Moeen Ali, Chris Morris, Gurkeerat Singh and Washington Sundar - all registered single-digit scores - RCB could only muster a below-par 145 for 6 which was easily overhauled by CSK.

The dependency on AB-Kohli was more evident in the losses against MI and SRH. Kohli was dismissed for a single-digit score and AB also did not make much of an impact. This has been a trend throughout the tournament. Even with contributions from Paddikal and the bowlers, the playmaker match-changing knock had to be played by either AB or Kohli.

AB's 51 off 30 balls was the highlight of the win against SRH. RCB lost when both Kohli and AB failed against KXIP. AB's 55 off 24 balls was the difference between the two teams against MI while Kohli was the star against RR with 72 off 53 deliveries.

When AB failed against the Capitals and KXIP and Kohli was not able to produce the match-changing knocks, RCB lost again. They beat CSK with their skipper powering the innings with a fine 90. AB's 73 off 33 deliveries stole the show in the win against KKR. AB again played the defining knock against Royals scoring 55 off just 22 deliveries.

Thus, in all but one match - against KKR in Abu Dhabi - when the bowlers restricted the opposition to 84 for 8 and in effect won RCB the encounter - the team has been heavily dependent on either AB or Kohli or both for a win - this despite the contributions from Padikkal and match-winning performances from Yuzvendra Chahal and a much improved pace bowling unit.

Kohli and AB scored heaps of runs in both 2019 and 2018 and were the two highest run-getters for RCB in both the seasons. And yet the team finished 8th and 6th courtesy a lack of team effort. With a better all round team and showing, RCB should make it to the playoffs this year but their results of the last three matches and of the entire tournament suggest that their fortunes are still very closely connected with the performance of their two talismans - Kohli and AB!