KXIP have a slight advantage in the recent rivalry - they have beaten RR three times in the last 5 matches. KXIP won, both the home and away matches in 2019. In a very crucial encounter that may ultimately decide who secures the number 4 position in the points table and more importantly a place in the Indian Premier League (IPL) 2020 playoffs, Kings XI Punjab (KXIP) will clash with Rajasthan Royals (RR) in match 50 of the coveted T20 league in Abu Dhabi on the 30th of October. KXIP have won 6 and lost as many of the 12 matches they have played and are currently placed at number 4 on the points table. The Royals have won 5 and lost 7 of the 12 matches they have played in IPL 2020 and are at number 7.

The Royals hold the edge in the head to head record between the two teams having beaten KXIP 11 times in 20 matches.

KXIP have a slight advantage in the recent rivalry - they have beaten RR three times in the last 5 matches. KXIP won, both the home and away matches in 2019.

KL Rahul (69 off 54 balls) and Mayank Agarwal (106 off 50 balls) put together a record-breaking 183-run stand for the opening wicket in Sharjah - in the first match between KXIP and RR in IPL 2020. KXIP posted a massive 223 for 2 but were then hit by the Sanju Samson hurricane! The Indian wicket-keeper batsman hammered a breathtaking 85 off just 42 deliveries and coupled with fine performances from Steven Smith (50 off 27 balls) and Rahul Tewatia (53 off 31 balls) took RR to a stunning four wicket win with three balls to spare.

R Ashwin starred in KXIP's 12-run win over RR in Mohali in 2019. A fine batting display by the top 4 helped KXIP post a competitive 182 for 6 in the allotted 20 overs. Sanju Samson and Rahul Tripathi had taken RR to 97 for 1 in the 12th over before R Ashwin got through the defenses of the former. The Indian off-spinner then saw the back of Tripathi in the 16th over. RR's chase was derailed and they fell short of the target. Ashwin was also very restrictive conceding just 24 runs in his 4 overs.

Robin Uthappa has scored 726 runs in 27 innings at a strike rate of 138.02 against Kings XI Punjab - this also includes his numbers for other franchises. Samson has an aggregate of 464 against KXIP. Siddharth Trivedi picked 11 wickets for the Royals in matches against KXIP.

Shaun Marsh aggregated 409 runs for KXIP in matches against the Royals while Chris Gayle has scored a total of 400 runs against RR (including his stints for other franchises). Mujeeb Ur Rahman has picked 7 wickets in 4 KXIP-RR matches at an impressive economy rate of 6.86. 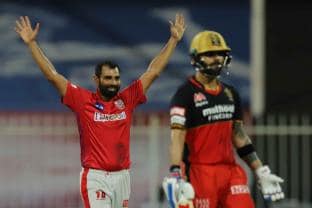 Highest Strike Rate in an Innings: