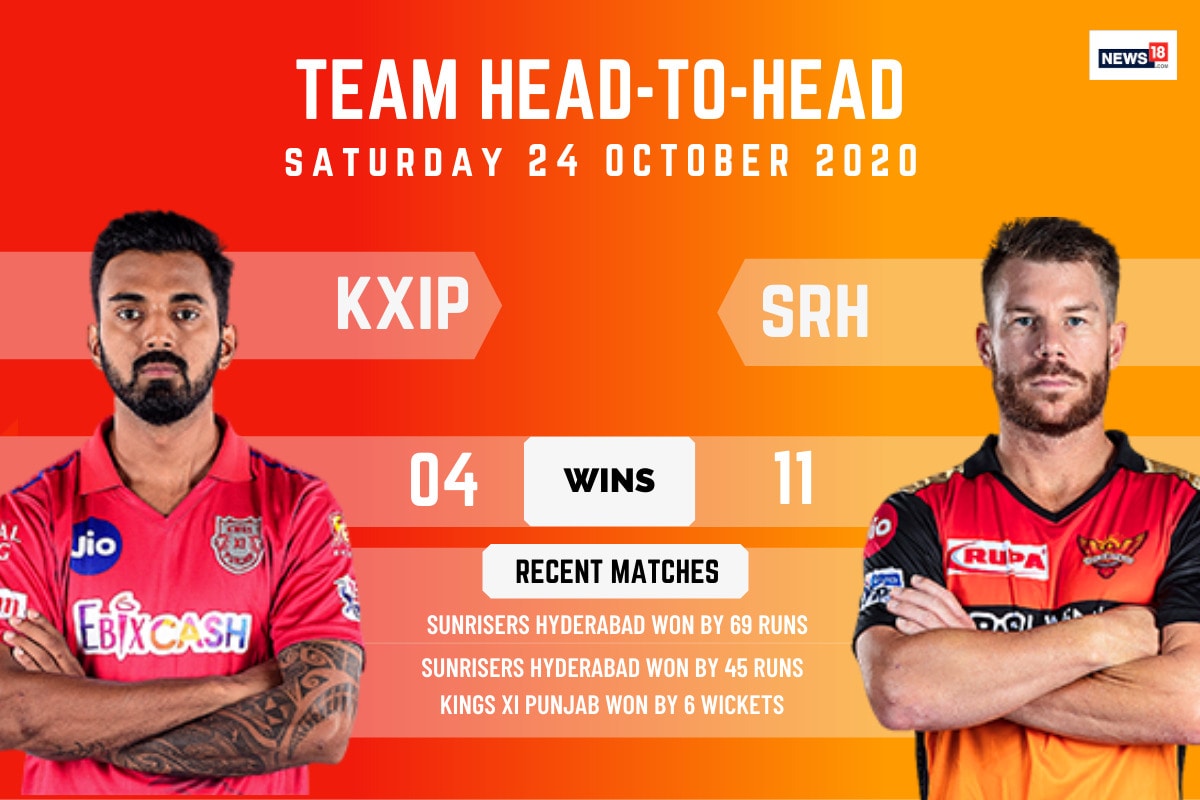 Sixth-placed Kings XI Punjab (KXIP) will clash with fifth-placed Sunrisers Hyderabad (SRH) in a very crucial match in Dubai that could ultimately decide the fourth playoff spot. Both KXIP and SRH have 4 wins each from 10 matches but the latter is a position higher on the points table courtesy a better net run rate.

We look at the Head to Head Record between the two teams.

SRH have dominated the rivalry and have a 11-4 Head to Head Record against KXIP.

SRH have got the better of KXIP in recent times too having won three of their last 5 matches.

ALSO READ: IPL 2020: Rajasthan Royals vs Sunrisers Hyderabad Preview - A Do or Die Battle for Both Teams

Jonny Bairstow's 55-ball 97 helped SRH post a mammoth 201 for 6 in their allotted 20 overs in Dubai in the first match between these two teams in IPL 2020. Nicholas Pooran was the lone warrior for KXIP hammering 77 off just 37 deliveries. The next highest score was 11 as KXIP were bowled out for 132 in the 17th over.

SRH beat KXIP by 45 runs in the last encounter between the two teams in 2019 – in Hyderabad on the 29th of April. A 56-ball 81 from David Warner helped SRH post a mammoth 212 for 6. The Australian southpaw blasted 7 fours and 2 sixes. Saha, Pandey and Mohammad Nabi also chipped in with the bat. KL Rahul top-scored for KXIP with a 56-ball 79 but with not much support from others, the team fell short by 46 runs in the chase.

It was a Glenn Maxwell special when the two teams last met in the UAE – in Sharjah in April, 2014. The Australian powerhouse hammered 95 off just 43 deliveries to power KXIP to 193 for 6. Pujara and Sehwag also chipped in with 30s. SRH were never in the chase and were bowled out for 121 in the 20th over.

LakshmipathyBalaji was the pick of the KXIP bowlers returning with 4-13 in 4 overs.