Mumbai Indians (MI) were a class apart in the Indian Premier League (IPL) 2020 and deservingly won the title. Here are 13 numbers which define IPL 2020. The best team of the tournament went on to lift the trophy for a record 5th time - yes, Mumbai Indians (MI) were a class apart in the Indian Premier League (IPL) 2020 and dominated the competition ultimately registering a comprehensive win over Delhi Capitals (DC) to win the title. There were many great performances in the tournament - from KL Rahul's run-scoring prowess to Dhawan's transformation, from Rabada's wickets to Rashid Khan's brilliant restrictive bowling, from MI's phenomenal fast bowling pair to the uncapped players making a mark this season. (IPL 2020 ORANGE CAP  |  IPL 2020 PURPLE CAP)

We look at 13 Numbers which define IPL XIII.

5: The Number of IPL Titles won by Mumbai Indians

6: The Number of Times Rohit Sharma has Won the IPL title KL Rahul aggregated 670 runs in 14 innings at an average of 55.83 and strike rate of 129.34 this season. His exploits included one hundred and 5 fifties. Rahul topped the run-charts despite his side Kings XI Punjab not making the playoffs - that is how good and consistent he was in the tournament.

Rahul has been a run-making machine in the IPL over the last 3 editions. He was the second-highest scorer in IPL 2019 and the third-highest in IPL 2018. No one has scored more runs combined than Rahul in the last three seasons of the IPL.

30: The Maximum Number of Wickets in the Tournament

Kagiso Rabada picked 30 wickets from 17 matches at a strike rate of 13.1 with two 4-wicket hauls in the tournament.

He was also the second-highest wicket-taker in IPL 2019 with 25 wickets in 12 matches at a strike rate of 11.2 again with two 4-wicket hauls. Jasprit Bumrah and Trent Boult were the best fast bowling pair in IPL 2020. They took a total of 52 wickets at a strike rate of 13.54 between them in 15 matches. They struck with the new ball in as many as 12 of these 15 matches and an overwhelming majority of their wickets were of high quality opposition batsmen - 42 of their 52 dismissals (81%) were of the top 6 opposition batsmen! Bumrah-Boult overshadowed the performance of Rabada-Nortje who also combined to pick 52 wickets. 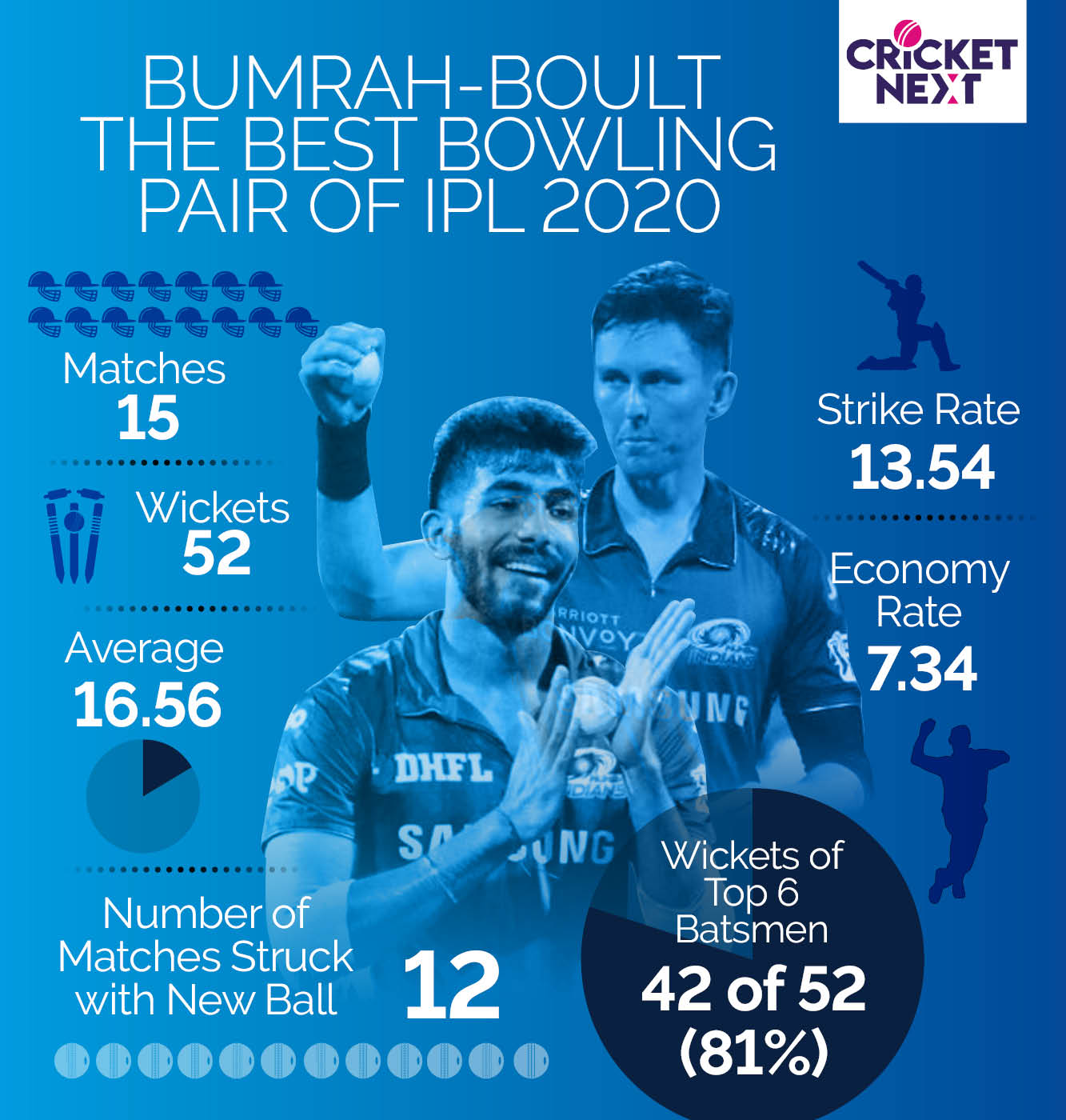 No other team had as many as 3 bowlers who bagged 15-plus wickets.

The combined effort of Bumrah, Boult and Chahar along with supporting acts by James Pattinson (11 wickets), Krunal Pandya (economy rate of 7.57) and Nathan Coulter-Nile (economy rate of 7.92) made MI the most potent bowling unit of the tournament. 486: The Number of Runs Dhawan Scored After his Transformation from Accumulator to Aggressor

Shikhar Dhawan was sluggish and scored 132 runs at a strike rate of just 122.22 in his first 6 matches. But he went a few gears up thereafter hammering 486 runs in his next 11 matches at a strike rate of 152.35! This transformation from accumulator to aggressor was one of the stories of the tournament and a major reason for DC's success in the competition. Interestingly, Dhawan's batting approach had followed a similar trend and pattern in the last edition in 2019 too!

1499: The Aggregate of the Three Run-Making Musketeers for MI this season

Ishan Kishan, Quinton de Kock and Suryakumar Yadav all scored in excess of 450 runs at a strike rate of above 140 in IPL 2020 - they combined to aggregate 1499 runs in 44 innings at a strike rate of 143.72 with 12 fifties. The consistency of their top-order was one of the major reasons for MI's success this year. Not only did they score big but did so at a very quick rate.

MI has three players in the top 10 run-getters list of IPL 2020. Only one other team has as many - RCB. But there is a stark difference in the numbers.

5.37: The Best Economy Rate of the Season

Rashid Khan enhanced his reputation in IPL 2020 - he bowled 64 overs, ie 384 deliveries of which 168 were dot deliveries - basically, 43.75% of his balls were not scored off in the tournament.

Anrich Nortje intimidated the batsmen with his speed - 4 of the fastest 5 deliveries of IPL 2020 were delivered by the South African speedster.

The left-arm pacer from SRH earned himself the nickname of 'Yorker Natarajan' - he bowled as many as 64 toe-crushing yorkers in the tournament. His ball to dismiss AB de Villiers in the Eliminator is being widely acclaimed as the 'Ball of the tournament'!

Andre Russell's failure with the bat was one of the major reasons for KKR's disappointing campaign in IPL 2020. He could muster a total of just 117 runs in 9 innings with a highest score of 25 this year. Russell got an under-20 score in as many as 7 of the 9 innings in this edition. It was a stark contrast to the Russell of IPL 2019 who amassed 510 runs in 13 innings at a stunning strike rate of 204.81 including 4 fifties in what was one of the best batting displays in the history of the IPL! How the mighty fall!