IPL 2020, DC vs RR Match at Dubai, Highlights: As it Happened

IPL 2020 Live Score, Delhi Capitals vs Rajasthan Royals, Latest Update: IPL 2020 Live Score, RR 148/8, 20 overs: 13-run victory for DC after they bowled some fantastic stuff with Rabada, Nortje and Deshpande. The debutant finished with figures of 2/37 and may have had another one if he hadn't clashed into Shreyas Gopal while both were looking at the ball, skied by Tewatia.

IPL 2020 Live Score, RR 148/8, 20 overs: 13-run victory for DC after they bowled some fantastic stuff with Rabada, Nortje and Deshpande. The debutant finished with figures of 2/37 and may have had another one if he hadn't clashed into Shreyas Gopal while both were looking at the ball, skied by Tewatia.

IPL 2020 Live Score, RR 133/5, 17 overs: Tewatia ramps a Rabada boundary over the keeper for four to make it an 8 run over for RR. Uthappa however having a bit of trouble with the South African.

IPL 2020 Live Score, RR 123/5, 15 overs: Tewatia gets a slice of luck against Deshpande as Nortje drops it at fine leg. 8 runs for Tewatia and Uthappa who are looking to keep things moving with no dots and no risks.

IPL 2020 Live Score, RR 115/5, 14 overs: Uthappa finishes that over well with a reverse sweep and a single after the horror moment earlier. RR need 47 from 6 overs.

IPL 2020 Live Score, RR 110/4, 13 overs: Nortje comes back into the  attack with the pace reading 150+ to Parag at the end. Before that Uthappa picked him off for a four through backward point and then a SIX over fine leg!

IPL 2020 Live Score, RR 99/4, 12 overs: Excellent over from Axar! Gets Samson after he smashed him for a couple of sixes earlier in the game. Four runs only with Uthappa and Parag in the middle.

IPL 2020 Live Score, RR 95/3, 11 overs: Tushar Deshpande's all action over ends with a boundary as Uthappa flicks it past short fine off the free hit. Earlier there was a check for Uthappa obstructing the throw but he was fine and they take 10 from that over.

IPL 2020 Live Score, RR 86/3: WICKET! Tushar Deshpande has struck in his first game and what a wicket to get! Ben Stokes deceived by the slower one holes out at long on for 41.

IPL 2020 Live Score, RR 81/2: Huge SIX from Sanju Samson. He is looking good and if he stays there, this is going only in one direction. The RR way.

IPL 2020 Live Score, RR 58/2: SIX! Samson steps down the track and launches this one. It is gigantic to say the least.

IPL 2020 Live Score, RR 43/2: And this doesn't look good DC skipper Shreyas Iyer is walking off the field. If he is ruled out, DC will be staring into an abyss.

IPL 2020 Live Score, RR 37/1: Cleaned him up! What a turnaround by Nortje. Was hit for 16 in the last five balls and he comes back and disturbs Buttler's furniture.

IPL 2020 Live Score, RR 21/0: Wow, couple of boundaries from Ben Stokes. Stepped out and executed these shots with ease.

IPL 2020 Live Score, DC 161/7, 20 overs: Excellent bowling from Royals at the back end with Unadkat picking two in the final over to restrict Delhi to 161/7. Axar tried to maximise the last one but edges it to Tyagi at short third man. We'll be back for the chase shortly.

WICKET! Unadkat with a slower one wide outside off, making Carey stretch a bit for the big hit and it loops down to Archer at long off. DC 161/6.

IPL 2020 Live Score, DC 153/5, 19 overs: WICKET! Stoinis gone for 18 as Archer finishes with figures of 3/19. Five singles before Stoinis looks to pull him away but has not connected well enough. Tewatia takes an easy catch.

IPL 2020 Live Score, DC 148/4, 18 overs: Excellent finish to his spell from Tyagi. An over with four yorker length deliveries restricts Carey and Stoinis to just five runs. Tyagi finishes with 1/30.

IPL 2020 Live Score, DC 143/4, 17 overs: Big over for DC against Archer as Carey crashes him over point for a SIX off a fast short one after making some room. 11 from that over for DC.

IPL 2020 Live Score, DC 132/4, 16 overs: WICKET! Fantastic over from Kartik Tyagi ends with  a wicket of Shreyas Iyer who departs for 53. Looks to launch the youngster's last delivery into orbit and miscues - Jofra Archer at long off takes a good catch. Big wicket at this time.

IPL 2020 Live Score, DC 129/3, 15 overs: Expensive over from Unadkat as Shreyas Iyer tonks him for a couple of huge SIXES! The last one just about getting over the long boundary as Stokes tried something elaborate. 17 from that over. 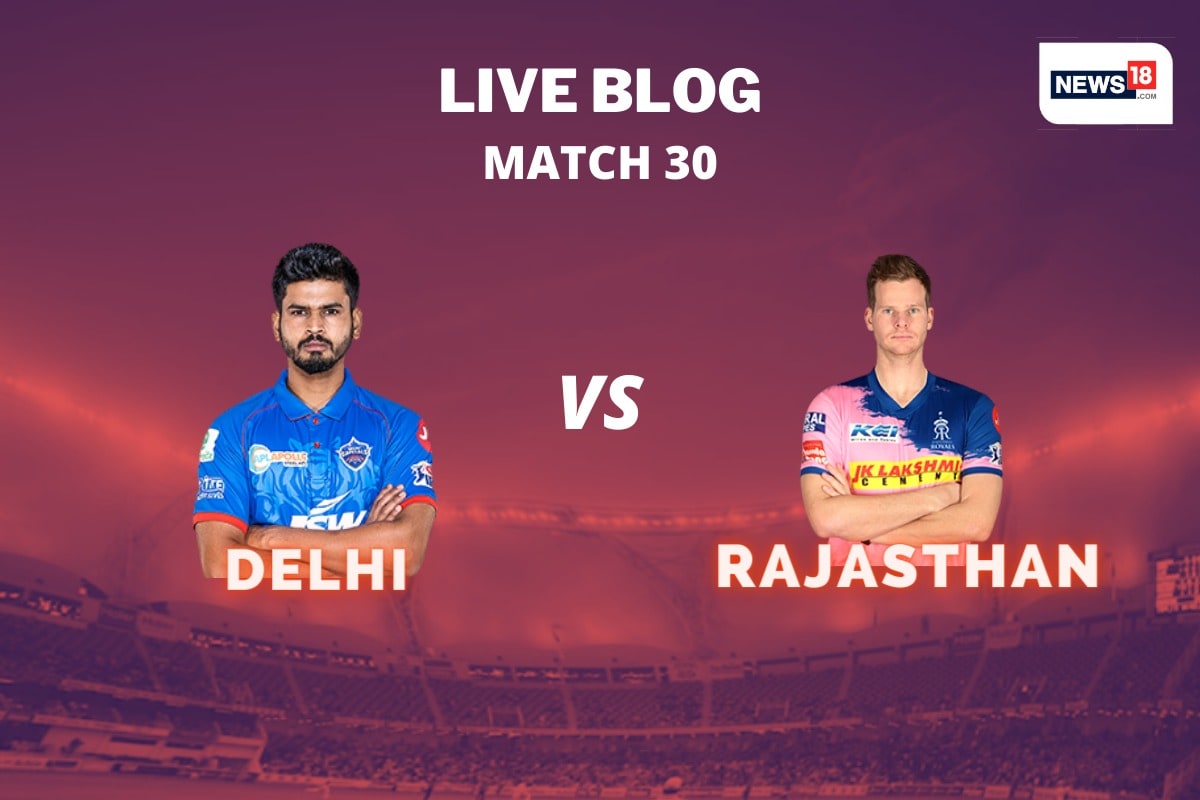 IPL 2020 Live Score, Delhi Capitals vs Rajasthan Royals, Latest Update: IPL 2020 Live Score, RR 148/8, 20 overs: 13-run victory for DC after they bowled some fantastic stuff with Rabada, Nortje and Deshpande. The debutant finished with figures of 2/37 and may have had another one if he hadn't clashed into Shreyas Gopal while both were looking at the ball, skied by Tewatia.

Preview: Delhi Capitals (DC) will face Rajasthan Royals (RR) in match 30 of the Indian Premier League (IPL) 2020 in Dubai on the 14th of October. A win for DC put them at the top of the points table while RR would look to build on the victory against the Sunrisers.

Although they were beaten by Mumbai Indians in the last encounter, DC sit comfortably at the number 2 position on the points table with 5 wins from 7 matches. Everyone in the DC top and middle order has got runs in the tournament – Shikhar Dhawan was their top-scorer in the previous match, Prithvi Shaw has already given three significant performances with the bat, skipper, Shreyas Iyer with 245 runs is their highest scorer of the tournament and Marcus Stoinis has produced two gems with the bat lower down the order.

Although Rishabh Pant hasn’t yet produced a great Rishabh Pant-type power knock in IPL 2020, DC would miss him and his X-factor in the middle order – Pant is due to miss at least a couple more matches due to a hamstring injury.

Kagiso Rabada has been the spearhead of the DC attack with 17 wickets from 7 matches (the highest in the tournament) at an incredible strike rate of 9.7. He has also been difficult to get away as his economy of 7.69 indicates.

Axar Patel has been their unsung hero with the ball choking the opposition batsmen in the middle overs. He has a brilliant economy rate of 5.05 in IPL 2020.

Riyan Parag and Rahul Tewatia led the Royals fightback taking them to a splendid five-wicket win against the Sunrisers in Dubai – this was RR’s first win after four consecutive defeats.

RR need Sanju Samson and Steven Smith to fire their form has dramatically fallen after the initial twin performances in Sharjah. The return of Ben Stokes would give the batting a big boost. He could form a formidable all English opening pair with Jos Buttler if the management persists with him at the top of the order.

Robin Uthappa has been in terrible form in IPL 2020 and has aggregated just 51 runs in 5 matches at a strike rate of 89.47. Time is running out for the T20 veteran who seems to be hanging on to his position purely on past reputation.

The RR bowling unit is heavily dependent on Jofra Archer, he is their leading wicket-taker and the most restrictive bowler (economy rate of 6.82) in the tournament.