IPL 2020, KXIP vs CSK Today's Match at Dubai Highlights: As It Happened

IPL 2020 Kings XI Punjab vs Chennai Super Kings Live Score and Latest Updates - IPL 2020 live score CSK 181-0: That is it then. A six and a four off Du Plessis' bat in the 18th over sees CSK register an absolutely dominant win over KXIP. The target seemed a good one but CSK made a mockery of it.

IPL 2020 live score CSK 181-0: That is it then. A six and a four off Du Plessis' bat in the 18th over sees CSK register an absolutely dominant win over KXIP. The target seemed a good one but CSK made a mockery of it.

IPL 2020 live score CSK 168-0: Jordan, who's had a day to forget, comes on to bowl and his third over goes for 12 including two fours off Du Plessis. CSK are coasting towards a win.

IPL 2020 live score CSK 156-0: Chennai now need 23 to win off the last 4 overs, that is less than a run a ball. Du Plessis and Watson have been dominant today. KXIP have looked clueless.

IPL 2020 live score CSK 135-0: The timeout has been taken in the 14th over itself and CSK are cruising. At this rate they are heading for a 10-wicket win, which will boost their morale and also help their NRR.

IPL 2020 live score CSK 123-0: Brar and Bishnoi are toiling but with no success thus far. Du Plessis and Watson are collecting runs at will here and nothing seems likely to uproot them from the crease.

IPL 2020 live score CSK: FOUR, FOUR! Watson begins the 11th over, bowled by Jordan, with successive boundaries. That is followed by a single and a dot before the over ends with two singles.

IPL 2020 live score CSK 101-0: Century stand comes up between these two batsmen as the innings reaches the mid-point. The game looks well in the bag for them now.

IPL 2020 live score CSK 81-0: Ravi Bishnoi and Harpreet Brar bowl the first two overs after the powerplay and they are expensive affairs. KXIP need wickets soon because these two batsmen are well set.

IPL 2020 live score CSK: FOUR, FOUR, FOUR, FOUR! Chris Jordan comes into the attack and his first over is one to forget, with Du Plessis dispatching him for four boundaries. 19 runs came off the over.

IPL 2020 live score CSK 41-0: Shami comes back for his second over of the match and it an expensive one that goes for nine, including a boundary by Du Plessis. KXIP need a wicket fast.

IPL 2020 live score CSK 32-0: Harpreet Brar comes in for his first over and it is a decent one, going for just 7 despite Watson getting another boundary. Crucially for Chennai, they have not lost any wickets yet.

IPL 2020 live score CSK 25-0: Cottrell's second over is another expensive one, going for nine including one Watson boundary over mid-off. CSK have started the game well so far.

IPL 2020 live score CSK 16-0: Mohammed Shami shares the new ball with Cottrell and aside from a five wides, his over is a decent one and goes for just 7 runs.

IPL 2020 live score CSK 9-0: FOUR, FOUR! Watson, whose form has been a major question mark all season, gets one past fine leg and another past mid-on. Good start for Chennai.

IPL 2020 live score: Hello and welcome to the second innings. Shane Watson and Faf du Plessis come out to open tje batting for CSK, Sheldon Cottrell has the new ball in hand. Here we go!

IPL 2020 Live Score, KXIP 178/4, 20 overs: Sarfaraz starts off the final over with a couple of boundaries to third man before Thakur bounces back well in the over. KXIP finish with 178/4.

IPL 2020 Live Score, KXIP 166/4, 19 overs: One over to go in the innings and Maxwell makes the penultimate one count. 11 runs for KXIP as he flat bats Bravo to the fence along with a few twos to go.

IPL 2020 Live Score, KXIP 155/4, 18 overs: 2 overs to go here and KXIP have suddenly lost some of their momentum after loss of the quick wickets. How many more can they get?

IPL 2020 Live Score, KXIP 152/4: WICKET! Thakur has another one. Full and wide outside off stump and KL Rahul looks to work it away but is caught behind by MS Dhoni for 63.

IPL 2020 Live Score, KXIP 152/3: WICKET! Huge hit from Pooran as he looks to go big but it's gone realy high and Jadeja has taken a fantastic catch. Pooran goes for 33.

IPL 2020 Live Score, KXIP 141/2, 16 overs: Pooran has absolutely smashed the long hop from Sam Curran into the top tier for a SIX. Three singles and a two along with that makes it an 11 run over for KXIP.

IPL 2020 Live Score, KXIP 130/2, 15 overs: Classy batting from KL Rahul as he takes Thakur to the cleaners here. They've picked off 16 with Rahul adding a second boundary after a delicate dab to third man. They're going through the gears here.

SIX and FOUR! Rahul picks up Thakur and goes inside out over extra cover for a maximum which brings up his fifty. Follows that up with a slap over cover that has gone for four!

IPL 2020 Live Score, KXIP 114/2, 14 overs: Jadeja bowls out and Pooran makes the final two deliveries count as he thumps him through extra cover first and then clubs him over cow corner for a huge SIX! 13 off that over for KXIP.

IPL 2020 Live Score, KXIP 101/2, 13 overs: Bravo comes back into the attack and Rahul picks off a streaky boundary off an outside edge. Three more singles after that as Rahul and Pooran look to rebuild before the death overs.

IPL 2020 Live Score, KXIP 94/2, 12 overs: WICKET! Mandeep's short stay is over as he falls to Ravindra Jadeja. Smashes the uppish drive and Ambati Rayudu takes a good sharp catch. Not what KXIP had in mind.

IPL 2020 Live Score, KXIP 88/1, 11 overs: Mandeep shows how to get the ball over the fence. Slog sweeps and then pulls Chawla away for huge SIXES. 17 runs from the over for KXIP. Massive hits from Mandeep.

IPL 2020 Live Score, KXIP 71/1, 10 overs: Jadeja hustles through another over and it almost sees a runout too but Chawla can't hold on to it and throw in time. 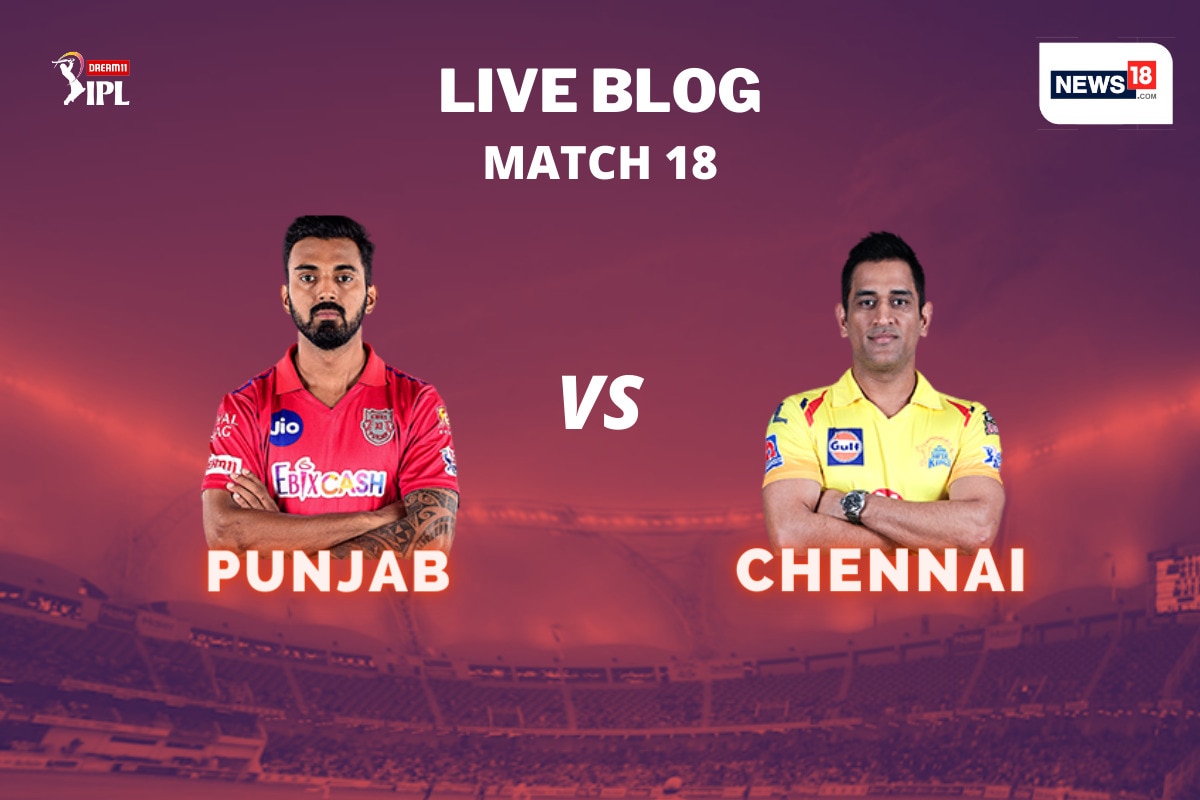 IPL 2020 Kings XI Punjab vs Chennai Super Kings Live Score and Latest Updates - IPL 2020 live score CSK 181-0: That is it then. A six and a four off Du Plessis' bat in the 18th over sees CSK register an absolutely dominant win over KXIP. The target seemed a good one but CSK made a mockery of it.

Preview: Two teams struggling in different ways. One that's failing to close out tight matches. Another that's finding it hard to compete. No. 7 and No. 8. Both with 1 win from 4 matches each. Kings XI Punjab take on Chennai Super Kings in Dubai on Sunday. The winner will feel slightly more relaxed. The loser will feel one step closer to the end.

CSK started their campaign with a win over Mumbai Indians, sending signals that they'll be a tough side to beat yet again. However, things started going downhill quickly. A loss to Rajasthan Royals in Sharjah was followed by further losses to Delhi Capitals and Sunrisers Hyderabad. Having lost three in a row for the first time in many years, CSK find themselves in a hole.

Kings XI Punjab started with a narrow loss to Delhi Capitals in a Super Over before thrashing RCB by a huge margin of 97 runs. However, another tight loss to Rajasthan and a big loss to Mumbai mean they're seventh in the table. It's a familiar territory for a team that has often promised a lot but failed to deliver.

Where does one begin. Their spinners are struggling. Their batsmen are struggling, with their intent coming under scanner. The top order is leaving plenty to do for an already struggling middle order. There are question marks over the spots of multiple players, with no readymade replacements available in the bench.

CSK are coming off a loss to SRH on Friday, and have only one day to make a turnaround. They had a six-day break between their previous two matches which helped them get a better combination, but the result is yet to come. They've spoken a lot about momentum from the top order, but they managed only 36 for 3 in the Power Play in chase of 165 against SRH.

They did manage to bring the margin of defeat down to 7 runs, but it was too little too late. Their catching - they dropped two catches - came under criticism from the captain too.

CSK's bowlers did a fairly decent job, despite throwing away the advantage to young Priyam Garg and Abhishek Sharma. They need to step up with the bat though, for that's the area where they're losing momentum.

Despite questions over their spots, expect Shane Watson and Kedar Jadhav to keep their places. CSK are unlikely to change their XI, but could do with a batting promotion for Sam Curran.

KL Rahul's men could already be thinking of lost opportunities. They failed to score 1 off 3 balls against Delhi. They lost to RR allowing Rahul Tewatia to smash 30 runs in an over. They bowled K Gowtham to Kieron Pollard and Hardik Pandya in the last over of the previous game, conceding 25 runs to give MI all the momentum.

Mayank Agarwal has the orange cap, and KL Rahul has promised to snatch it from him soon. Nicholas Pooran is getting among the runs too but apart from that, there's been little from the rest. Glenn Maxwell's poor track record in the IPL has continued, adding to KXIP's woes.

KXIP have struggled in the death bowling too. Rahul completed Sheldon Cottrell's overs quickly against MI, having seen him concede 5 sixes to Tewatia the other day. However, it meant an off-spinner bowling to Pollard and Pandya in the last over. MI smashed 104 runs from the last six. How do they fix this? How do they bring in more balance? That will be the big question.

It's likely that KXIP could bring back M Ashwin against CSK. The legspinner did little wrong but was dropped to accommodate an off-spinner in Gowtham, perhaps also due to his batting abilities. Apart from that, it's unlikely they'll run out of patience with Maxwell already. Jimmy Neesham was expensive, and they could be tempted to bring in Mujeeb Ur Rahman.