A total of 19 Australian players took part in the Indian Premier League (IPL) 2020 in the UAE. A total of 19 Australian players took part in the Indian Premier League (IPL) 2020 in the UAE. We analyze the performances of 10 of them who are also a part of the T20I series against India starting in early December. It is interesting to note that unlike most of the Indian T20I contingent, who stood out with their performances in IPL 2020, very few Australian players could leave a mark on the tournament.

Australia's T20I captain had a poor IPL in 2020. He aggregated just 268 runs in 12 innings for RCB with just fifty. But the most striking statistic was his abysmal strike rate! Finch scored at a rate of just 111.2 runs per hundreds balls - the lowest strike rate amongst the top 50 run-getters in the tournament. Finch failed in half the matches he batted in the competition - he registered a below-20 score in 6 of the 12 matches. Finch has a great record for Australia in T20I cricket with 2114 runs in 64 matches at an average of 38.43 and strike rate of 154.64. 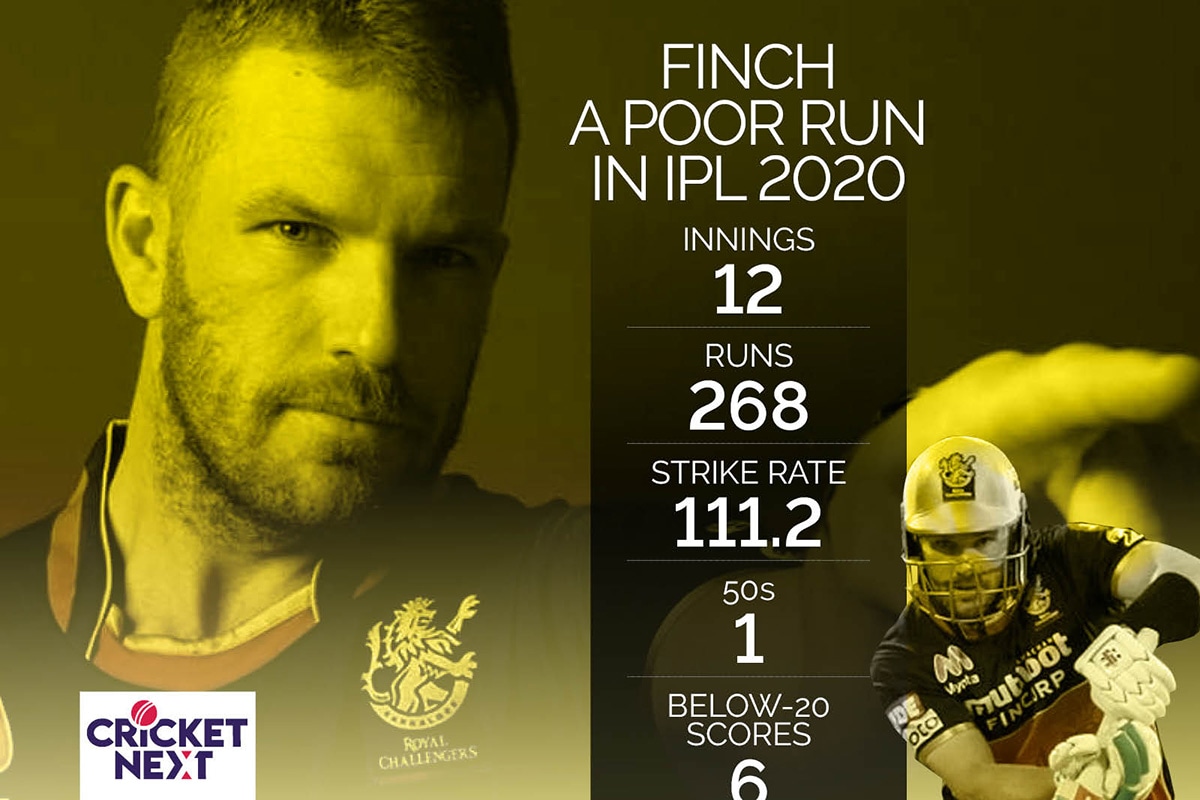 David Warner, the SRH captain, was the third-highest scorer of the season but was far from his destructive best. Warner aggregated 548 runs (6th time in a row he aggregated more than 500 in a season) with 4 fifties but was not at his attacking best for the most of the season - his strike rate of 134.64 an indicator of this. He only produced two Warner-like innings in the entire tournament - both in the final stages of the tournament - 66 off 34 deliveries against the Capitals in Dubai and an unbeaten 85 off 58 against Mumbai Indians in Sharjah. Warner crossed a strike rate of 140 in just 4 of his 16 innings in the tournament (min. runs 10). Maxwell had a shocker of a tournament! Neither did he produce even one significant innings nor even a mini-cameo in the entire IPL 2020. He aggregated just 108 runs in 11 innings at a strike rate of 101.88 - the lowest for a minimum of 100 runs scored in the tournament. Maxwell seemed to be completely out of form and lost his hitting prowess for the whole duration of the tournament - he did not hit even one six in the competition! Regarded as one of the most fearsome hitters of the ball in world cricket, Maxwell has a great record in T20I cricket with an average of 33.52 and strike rate of 158.36, including three hundreds. Marcus Stoinis was one of the Australian success stories in IPL 2020. The Australian all-rounder played some fine match-winning knocks for the Capitals as the 'finisher' down the order and also chipped in with crucial wickets. His standout performance came in DC's first match of the season, when coming in at 86 for 4, he hammered 53 off just 21 deliveries to take his side to a par total. He then returned and picked the wickets of Agarwal and Jordan off the final two deliveries of the match to force the match into a tie. Stoinis aggregated 352 runs in 17 matches at a strike rate of 148.52 while also chipping in with 13 wickets. However, he was taken for a few and his economy rate of 9.53 was on the higher side. 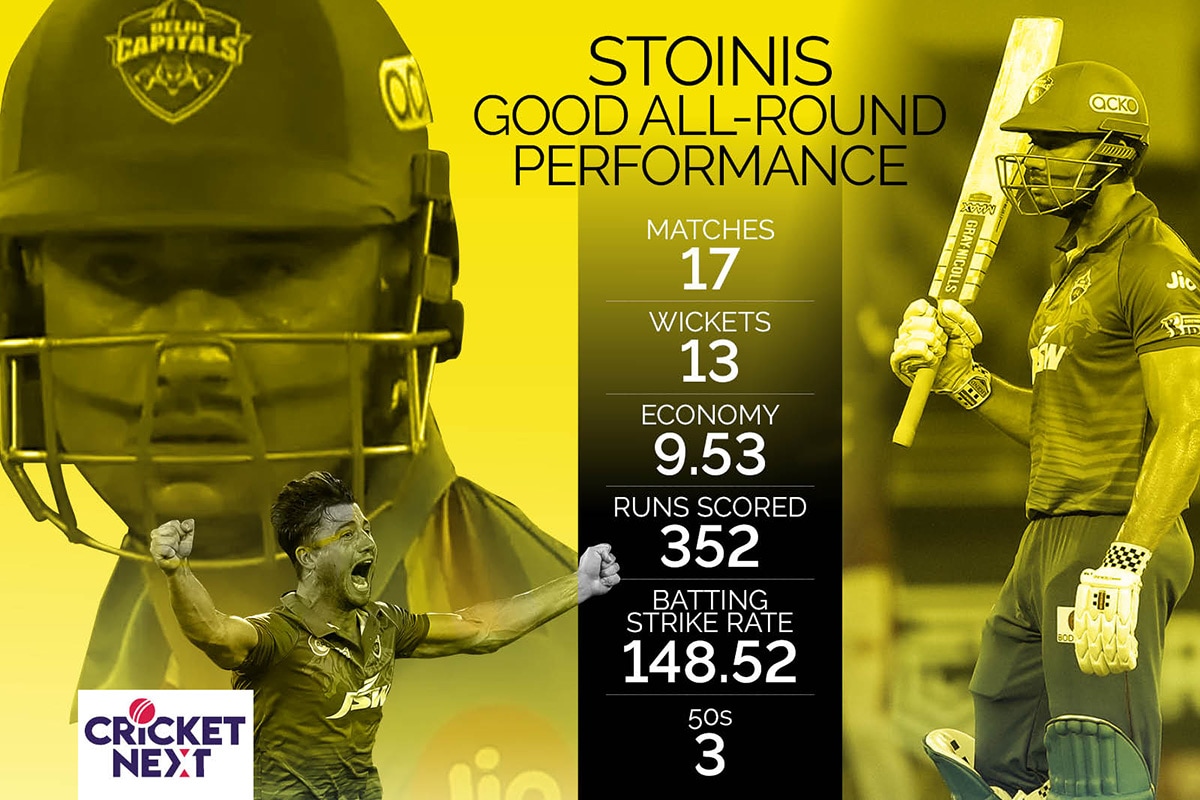 The failure of Pat Cummins for most of the tournament was one of the major reasons for KKR's failure this season. Cummins only came into his own in the last 4 matches in which he picked 9 wickets (total of 12 in the tournament) but by then his side were well behind in the race. But a good finish personally for him would boost his confidence ahead of the series against India. Cummins is the vice-captain of the T20I team.

Steven Smith, the Royals' captain, had a mixed bag in IPL 2020. He started the tournament with a bang with two rapid fifties in Sharjah, both resulting in a victory for his team but then completely went off the boil registering 5 single-digit scores in the next 6 matches. He got some runs in the second half but it was a case of too little too late as the Royals had left themselves with too much to do in the final few matches. Overall, Smith aggregated 311 runs with 3 fifties at a rate of 131.22 in the tournament - a below-par performance for his standards.

Hazlewood just got to play three matches in IPL 2020. He was economical in the 10 overs he bowled conceding just 64. Known for his disciplined line and length bowling, Hazlewood who has modelled himself on the great Glenn McGrath, has a great record in Tests and a very impressive one in ODIs too, but has just represented Australia in 8 T20Is in which he has conceded at a rate of 9.12 runs per over.

The hugely talented, wicket-keeper batsman from Australia, Alex Carey did not get many chances to show his mettle in IPL 2020. He scored just 32 runs in the three innings he batted and did not make much of an impact either with the bat or behind the stumps. Carey has a fine ODI record for Australia but a poor one in T20Is where has just scored 176 runs in 18 innings at an average of 12.57 and strike rate of 116.55.

Adam Zampa played just three matches for RCB this season. He was taken to the cleaners by the Mumbai Indians in Dubai conceding 53 runs in his 4 overs but gave a good account of himself against the Sunrisers in the Eliminator in Abu Dhabi where he returned with 1-12 in 4 overs. The leg spinner has an impressive overall T20 record with 174 wickets in 149 innings at an economy rate of 7.31.

Daniel Sams played three matches for the Capitals but went wicket-less and also conceded at a rate of 9.5 runs per over. The uncapped Australian left-arm seamer has an impressive record in T20 cricket where he has picked 52 wickets in 39 matches at a strike rate of 14.9.