IPL 2020 Orange Cap Holder: Kings XI Punjab skipper KL Rahul continues to top the run-scoring charts after match 48 between Mumbai Indians and Royal Challengers Bangalore in Abu Dhabi on Wednesday. Suryakumar Yadav and Devdutt Padikkal did smash fifties for their teams, but they are no where close to Rahul's tally of 595 runs. The next on the list is Delhi Shikhar Dhawan with 471 runs.

Mumbai Indians (MI) on Wednesday took a two-point lead at the top of the Indian Premier League (IPL) table with a five-wicket win over Royal Challengers Bangalore (RCB). Jasprit Bumrah's heroics with the ball restricted RCB to 164/6 wickets after which Suryakumar Yadav led his team to victory with an unbeaten 79 off 43 balls at the Sheikh Zayed Stadium. 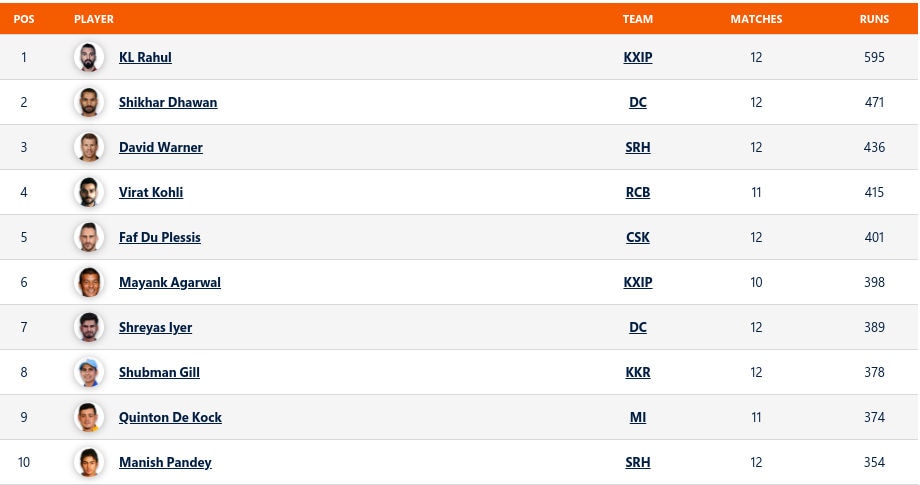 Bumrah was then brought back for the 17th and the over ended up being a double-wicket maiden as he got Shivam Dube and the big wicket of Padikkal in the over. Boult then dismissed Chris Morris in the 18th over after which Gurkeerat Mann Singh and Washington Sundar took RCB beyond the 160-run mark.