Chennai Super Kings have now lost three of the first four matches in this year’s edition and find themselves languishing at the bottom of the points table. This is their joint-worst start in IPL history. They also faced defeat three times in the first four matches in the 2009 edition. However, they fought back and went on to make the semi-finals that season where there were beaten by Royal Challengers Bangalore (in Johannesburg).

The major reason for CSK’s dismal performance this season is their top-order batting. 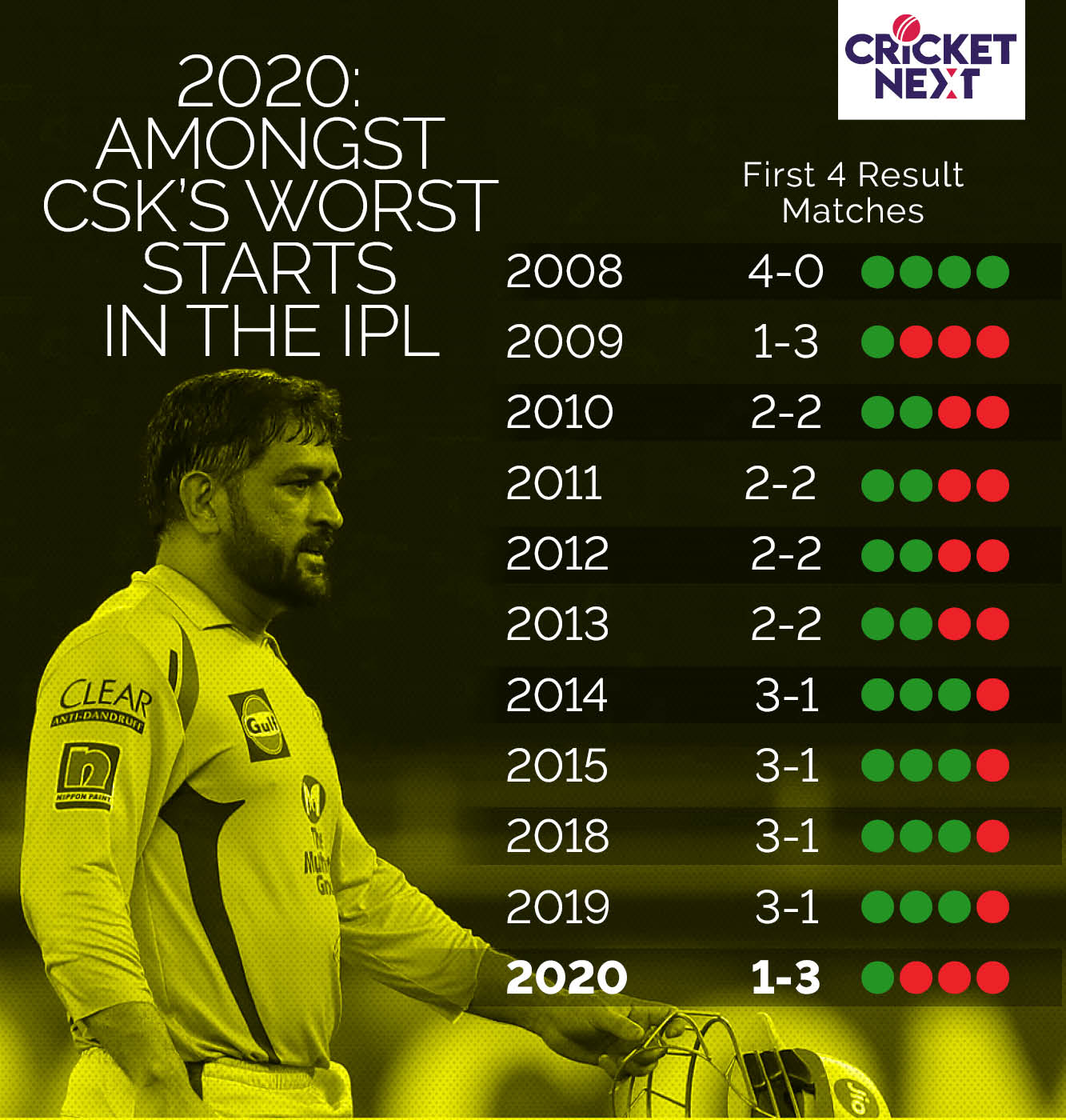 Barring Faf du Plessis, none of their batsmen has managed to cross an aggregate of 100 runs in the tournament. The openers have been poor with an average opening stand of 22. Shane Watson has just mustered 52 runs in 4 innings and found it difficult to provide the impetus at the start – as his strike rate of 108.33 indicates. Murali Vijay has been worse with just 32 runs from 3 innings at a strike rate of 74.41. Barring their chase against RR, where Watson smacked a few and helped CSK to 53 for no loss at the end of the power-play, they haven’t made use of the fielding restrictions in the first 6 overs that has left the middle order under tremendous pressure with a lot to do. 37 for 2, 34 for 2 and 36 for 3 – these have been CSK’s scores in the power-play in the remaining three matches – not only have they lost wickets but also been sluggish not scoring enough boundaries with the field in.

Also Read: Have Been Learning From Kieron Pollard & Hardik Pandya How to Confuse Opposition - Ishan Kishan

The CSK middle-order looks confused and without a strategy in place, especially while chasing totals above 165. MS Dhoni’s position and approach remain questionable. He might have been hugely successful pushing the match into the final overs when he was at his best, but Dhoni is not the Dhoni of old anymore. He can’t produce that magic consistently day in and day out. Thus, with time the strategy has to change. He cannot be rigid. At the moment, the strategy is dictating MSD and CSK rather than the other way round! The talented Ruturaj Gaikwad failed to make a mark in the two matches he played and Kedar Jadhav hasn’t been good enough with the bat in the middle overs – he has not shown the urgency to accelerate when CSK needed it the most in the chases.

CSK has some worries on the bowling front too. None of their pacers have threatened to pick wickets. Neither have their spinners been restrictive. Sam Curran, Piyush Chawla and Deepak Chahar – all have picked 5 wickets each from 4 matches.

Ravindra Jadeja has been very expensive giving away 10.14 runs per over.

CSK also seem to have fallen on the wrong side of an early emerging trend in IPL 2020. They have chased in all the 4 matches and only managed to overhaul the lowest target of 163 against MI in their first match of the tournament.

Of the 12 matches which have been decided in normal time (there have been two ties), as many as 9 have been won by the side batting first.

May be batting first will change CSK’s fortunes. Definitely worth a try as nothing else seems to be working for MSD’s men. CSK have made it to the playoffs/knockouts in every edition they have taken part in the tournament.