The Indian Premier League is one of the most entertaining tournaments in the world of cricket, in which the biggest cricket stars clash with the ball and the bat. Here is a list of batsmen with the highest batting strike rates in IPL 13 so far. 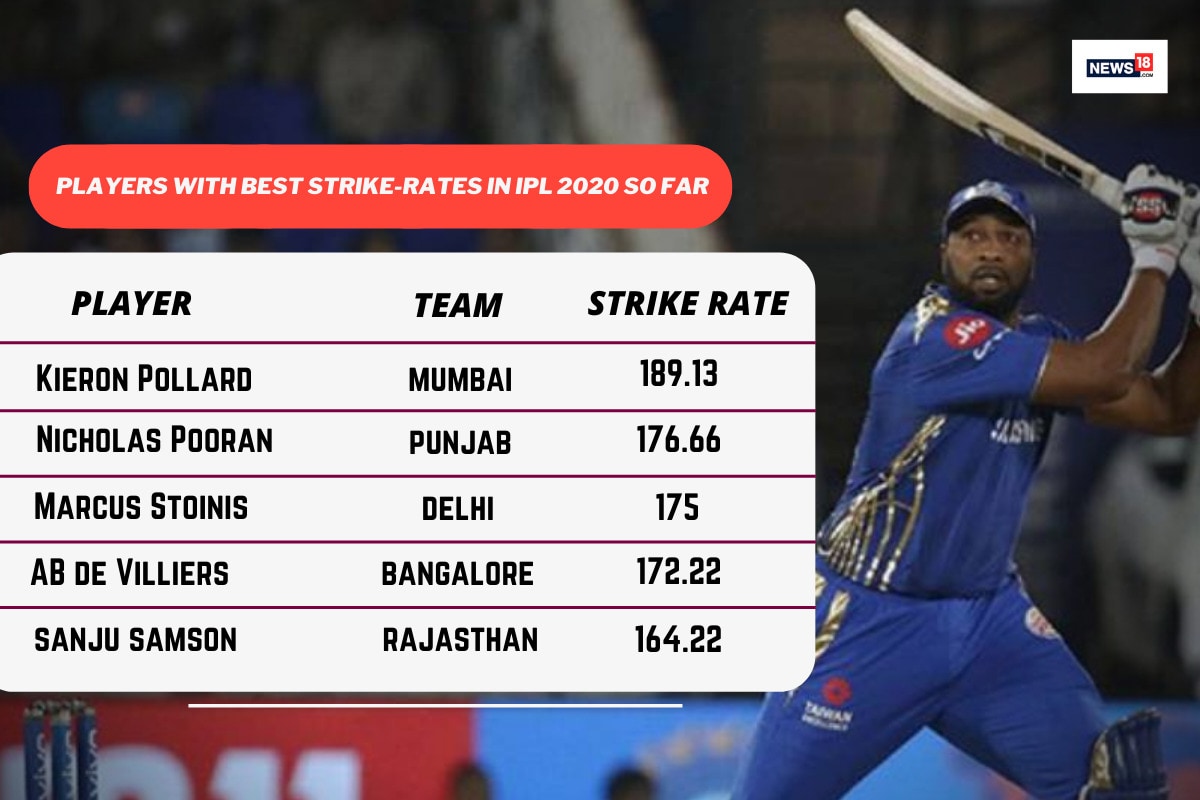 The 13th edition of the Indian Premier League (IPL) might have started off late but there is no dearth of quality ball-striking in the league so far. The batsmen have shown no sign of rustiness and have kept the opposition bowlers under the hammer.

Here is a list of batsmen with best strike-rates after the first three weeks of IPL 2020:

The West Indies all-rounder has been at his destructive best in IPL 2020. He might be 33 years of age but Pollard has not lost his might. He is currently averaging 174 with the bat and has also maintained an astonishing strike-rate of 189.13. It was well above the 200-mark but a sedate 11 off 14 balls against Delhi Capitals on Sunday (October 11) night brought down the strike-rate a little. In spite of that, Pollard is still leading the way rather easily.

There is plenty of Caribbean flavour in this table. Joining Pollard at the top is West Indian southpaw Nicholas Pooran. The youngster is already one of the leading six-hitters in IPL 2020 but has managed to maintain an explosive strike-rate of 176.66 in the tournament. Kings XI Punjab will more of Pooran’s hitting abilities if they hope to move up in the points table.

The Australian all-rounder has been in sizzling form since the opening game of the IPL 2020. He began the tournament with 20-ball fifty against Kings XI Punjab and hasn’t let his foot off the pedal since then. Stoinis has notched up another fifty since then and his power-hitting has been instrumental in taking the Capitals to near the top of the table. Coming in down the order for the Delhi franchise, Stoinis has an impressive strike-rate of 175 so far.

The former South African captain is known has Mr 360 because of his ability to hit all around the ground. De Villiers has already notched up a couple of half-centuries in his first 6 games for RCB this season and maintained a strike-rate in excess of 172. With skipper Virat Kohli also hitting form, De Villiers’ destructive hitting ability could propel RCB to the top of the table soon.

The Kerala wicketkeeper-batsman started off on a sensational note when he went on a six-hitting spree against IPL-12 runners-up Chennai Super Kings and then came up with another superb 85 against Kings XI Punjab in a record chase for the Royals. Samson has somewhat trailed off since then but still maintains an impressive strike-rate of 164.22. If the Royals batsman could find his form again, the strike-rate will zoom up quite rapidly.