IPL 2020: Players With Best Strike-Rates - Kieron Pollard Still the Man at the Top

In this tournament of IPL 2020 we have seen some remarkable batting performances by the players of all franchises. Here is a list of the top 5 players with the best strike-rates in this season. 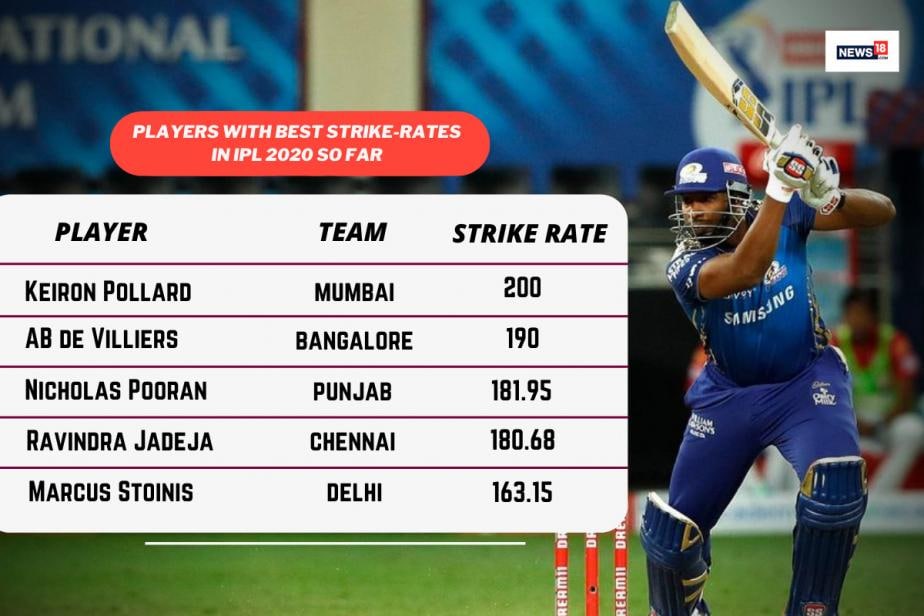 A month into the Indian Premier League 2020, we have seen some of the best cricketing action, records shattered and recreated, individual bests, momentum swings and so much more. In the short T20 format, one aspect that is most crucial is how quick one can score runs. Mumbai Indian’s Kieron Pollard is the leader in this department, being the only player with a strike rate of 200 or more. Let us check out the top five batsmen with highest strike rates in the IPL 2020 so far, considering those who have scored at least 100 runs in the tournament.

With a strike rate of 200, Pollard is the undisputed record holder for being the fastest run-getter this season. He has scored 208 runs overall, with his best knock of 60 not out in the match against RCB. He has smashed more sixes (17) than he has hit boundaries (10). Why bother the fielders, when you can just raise the bat a little higher, eh Pollard?

Not far behind Pollard is Royal Challengers Bangalore’s veteran AB de Villiers, who has made 285 runs in nine innings at a strike rate of 190. His best knock came against Kolkata Knight Riders in Sharjah, where he smashed an incredible 73 not out off 33 balls, helping his team win by 82 runs. He has smashed 19 sixes and 21 fours so far in the series.

With a strike rate of 181.95, Nicholas Pooran stands at the third position in the list. Despite KXIP’s poor showing in IPL 2020, Pooran has done remarkably well by contributing 242 runs in nine innings, which included 15 sixes and 19 boundaries.

Ravindra Jadeja, the only Indian in this list, has made 159 runs in 8 innings at a strike rate of 180.68. His batting average in the tournament so far is a decent 39.75 and his highest individual score is 50 vs Sunrisers Hyderabad. He has been a consistent performer for his team even with the ball.

Marcus Stoinis is one of the reasons Delhi Capitals are at the top of -the points table. He gives tremendous strength to DC’s middle order, having scored 217 runs at a strike rate of 163.15. He has smashed two half-centuries with his highest being 53 not out against RCB.