Let us check out the top five batsmen with highest strike rates in the IPL 2020, who have made at least 100 runs in the tournament. 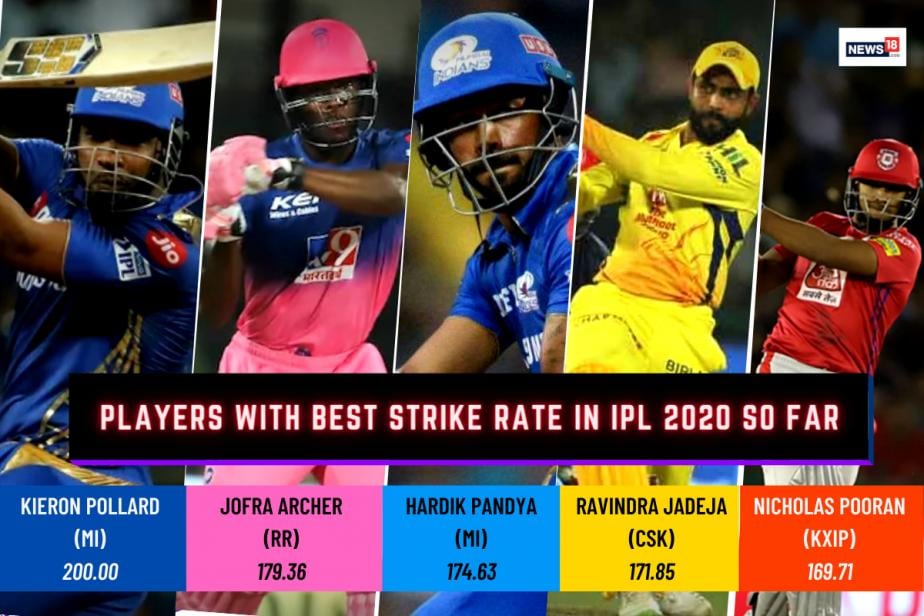 The league phase of the IPL 2020 is coming to an end and we have seen some fantastic knocks that have changed the course of matches. Making quick runs is what T20 is all about and Mumbai Indians, the top team of the season, has two of the fastest run-getters. Kieron Pollard remains at the top again this week. He is the only player with a strike rate of 200 or more. MI’s Hardik Pandya also features in the list today. Let us check out the top five batsmen with highest strike rates in the IPL 2020, who have made at least 100 runs in the tournament.

With a strike rate of 200, Pollard holds the record for being the fastest run-getter this season. He has scored 218 runs in nine innings, with a highest score of 60 not out in the match against RCB. He has smashed more sixes (18) than he has hit boundaries (11) in the tournament.

Rajasthan Royals all-rounder Jofra Archer has the second best batting strike rate of 179.36 in the IPL 2020. In his ten innings, he has scored 113 runs which includes 10 sixes and 5 boundaries. His team, however, lies at the bottom of the points table.

Hardik Pandya has played several crucial innings for his side and has been particularly effective in the final overs of the innings. With 20 sixes and 14 fours, he has amassed 241 runs at a strike rate of 174.63 in 11 innings.

Although this has been CSK’s weakest IPL performance, all-rounder Ravindra Jadeja did all he could for his team. With an impressive batting average of 46.40, he made 232 runs in 11 innings at a strike rate of 171.85, making him the fourth fastest run-getter in the series so far.

Nicholas Pooran was one of the most consistent performers of KXIP, a team which had some of the best batsmen of the tournament, but failed to qualify for the playoffs. Pooran contributed 353 runs in 14 innings to his side, scoring at a strike rate of 169.71, helped by 25 sixes and 23 boundaries. He is the highest run-scorer in this list.