IPL 2020: Quinton De Kock – Vital For Mumbai Indians at the Top of the Order

MI has won its last four matches. De Kock has provided them with a start in all the matches scoring match-winning fifties in three of them. 46 in 4.4 overs, 8 in 1.2 overs, 14 in 1.4 overs, 0 in 0.5 overs – these were the opening-wicket stands for Mumbai Indians (MI) in their first four matches in IPL 2020. Barring the first match against the Chennai Super Kings, which they also lost, MI was struggling with their first-wicket partnership. Their usually trusted and reliable South African opener, Quinton de Kock, looked a bit out of sorts. De Kock registered scores of 1 (3 balls), 14(15 balls) and 0(5 balls) against KKR, RCB and KXIP – not only was he not getting any runs, he was also slow in getting started wasting a number of precious deliveries in the powerplay.

Fast Forward. MI has won its last four matches. The constant for them in all these wins has been the performance of De Kock. He has provided them with a start in all the matches scoring match-winning fifties in three of them. Not only has MI benefited from the impetus at the top of the order, but this has also given Rohit Sharma, who has not been at his fluent best in the tournament, some breathing space.

MI lost Rohit Sharma in the opening over against SRH in Sharjah. Suryakumar Yadav also exited after a cameo with the team on 48 in the powerplay. After a cautious start (13 off 12 deliveries), De Kock took control. He was aware that MI would need a big total on the smaller ground. De Kock put together a match-changing 78-run stand with Ishan Kishan before being dismissed for 67 off just 39 deliveries – he hammered 4 fours and as many sixes in the knock. A late flourish by the Pandya brothers and Kieron Pollard took MI to a 200-plus total and they went on to win by 34 runs. It was the South African opener who gave the innings the momentum and laid the platform for the hitters to take over later. 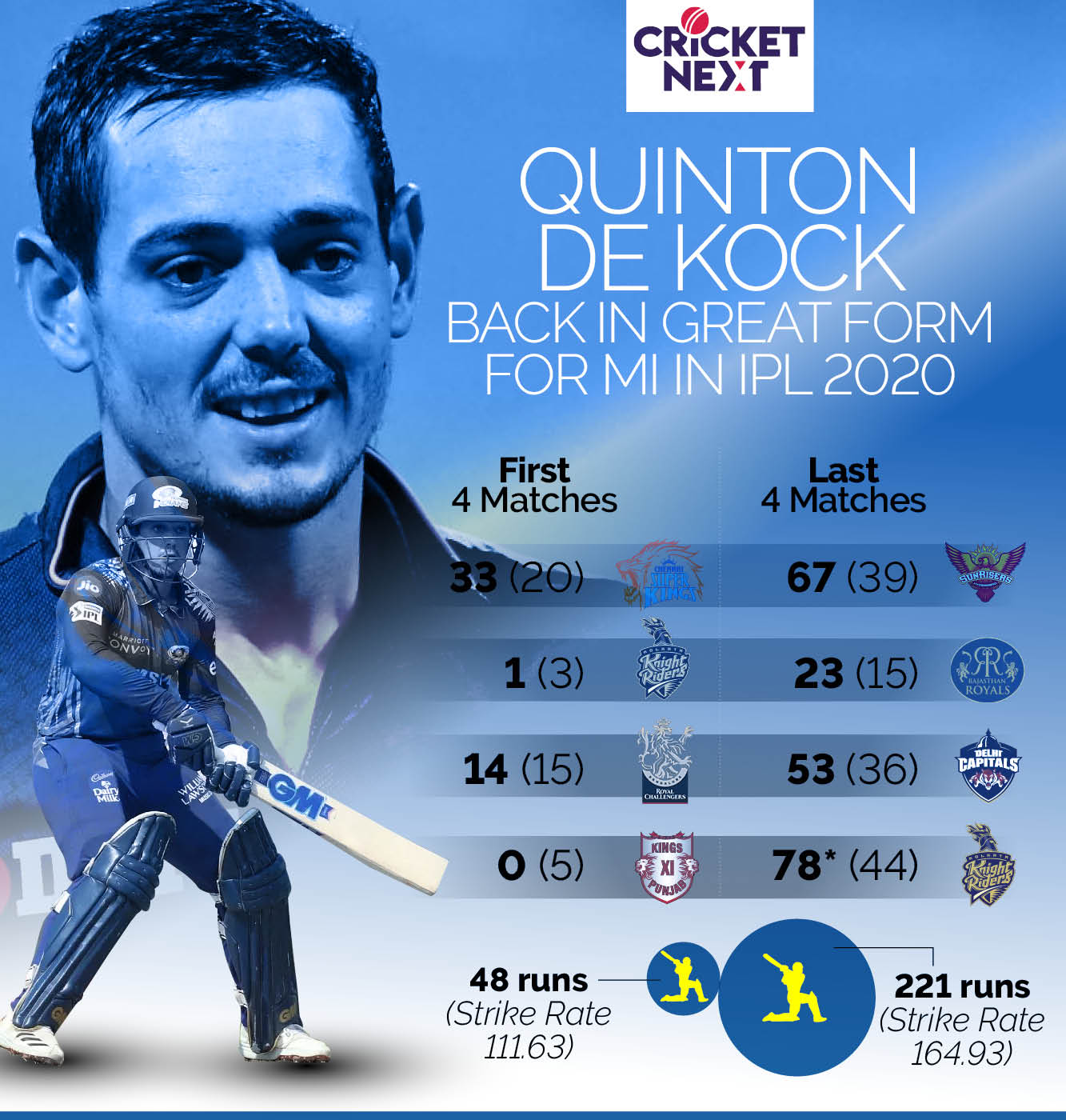 De Kock, together with Rohit, again gave MI a flying start against RR in Abu Dhabi. Although he did not go on to get a big score, his 23 off 15 deliveries meant that MI raced to 57 in the powerplay, again laying the foundation for a big total. MI did manage to score 193 for 4 which proved too much for the Royals.

MI again lost Rohit early in a 163-run chase against the Capitals in Abu Dhabi. But De Kock continued to attack dominating his partnership with Suryakumar Yadav. He had scored 53 off just 36 deliveries when he was dismissed in the 10th over – having already contributed 68.83% of his team’s runs. MI went on to win by 5 wickets with two balls to spare. It was a Player of the Match performance by De Kock – his knock and initiative took the match away from the Capitals in the first half of the chase.

De Kock gave his second consecutive Player of the Match Performance against KKR in Abu Dhabi. Chasing a below-par 149, De Kock gave MI a flying start as they raced to 51 without losing a wicket in the powerplay. He top-scored remaining unbeaten on a fine 78 off just 44 deliveries taking MI to a thumping 8 wicket win with more than three overs to spare.

After a slow start, the South African is running into peak form just at the opportune moment for his team this year.