Batting at number 7, Jadeja smacked an unbeaten 21 off 8 deliveries against KKR in Abu Dhabi almost pulling off the 167-run chase. 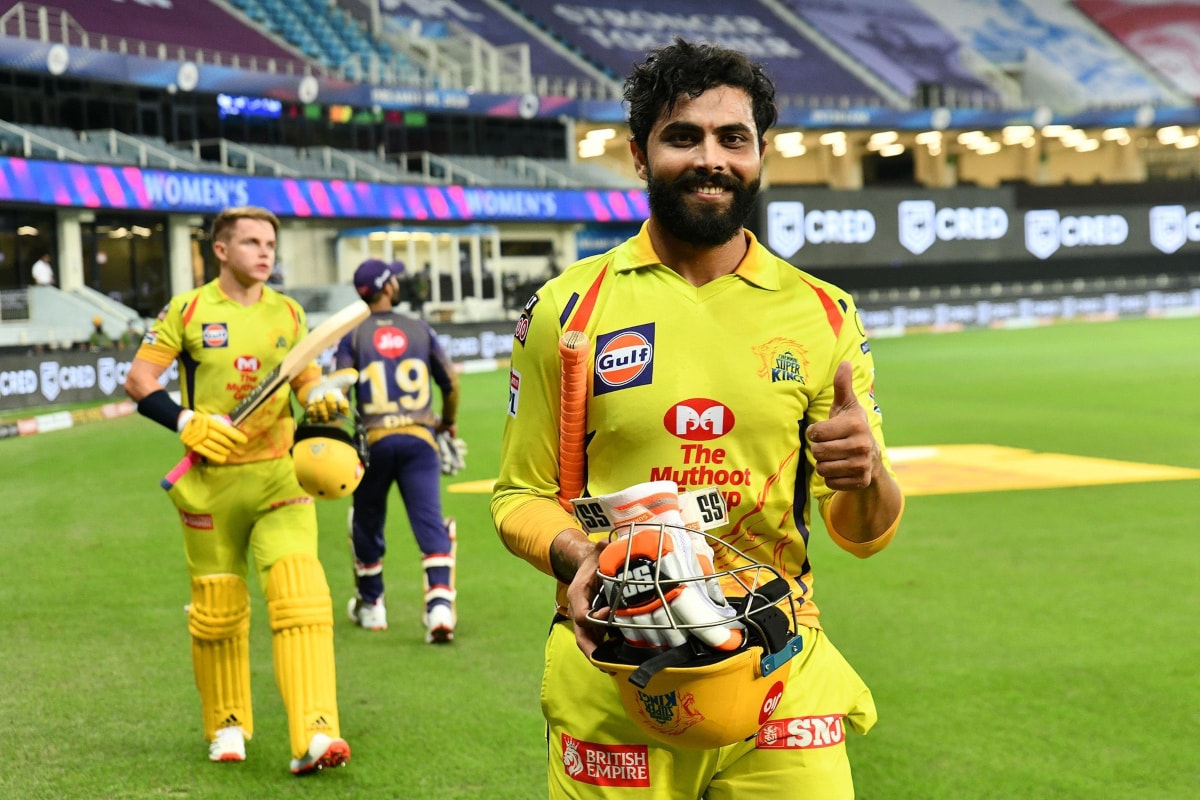 Ravindra Jadeja walked out to bat at 140 for 4 in the 18th over with CSK needing 33 runs off the last 16 balls of the match and smacked Lockie Ferguson - one of the quickest bowlers of IPL 2020 - for two fours and a six in the penultimate over to reduce the equation to 10 off the final over. Some good bowling from Kamlesh Nagarkoti left CSK to get 7 off the last two deliveries. Bang! Six over deep mid-wicket. Bang! Six over wide long-on! Game, Set and Match - CSK!

Ravindra Jadeja did it again for his team in IPL 2020! He scored 29 off the 30 runs CSK needed in the last couple of overs to earn them another consolation victory. Jadeja has flourished in his new role as the 'Finisher' in the tournament. With almost a non-existent lower middle-order and the failure of MS Dhoni and Kedar Jadhav with the bat, Jadeja has taken the onus upon himself to provide the innings with some sort of acceleration at the death. 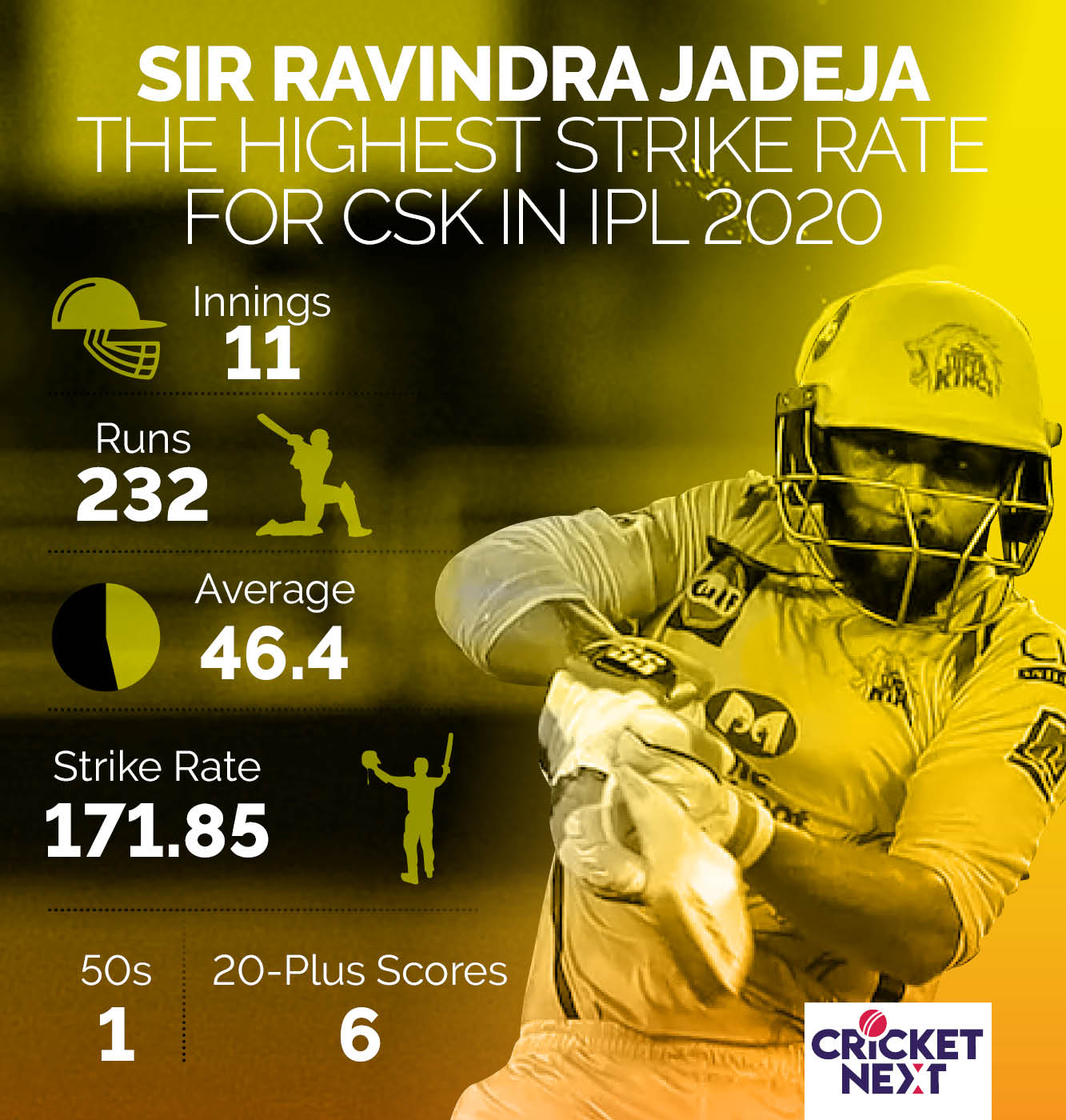 Jadeja has been in terrific form with the bat in the tournament - his timing has been as good as any top-order batsman and his hitting prowess as destructive as any other more famous name in the competition. He started off slowly not making much of an impact in the first three matches but since then has consistently produced the cameos batting in the lower order. Coming out to bat at 42 for 4 in the 9th over, chasing 165 against SRH in Dubai, he put together 72 with MS Dhoni and was the aggressor in the partnership hammering 50 off just 35 deliveries - it was his maiden half century in the IPL.

Batting at number 7, he smacked an unbeaten 21 off 8 deliveries against KKR in Abu Dhabi almost pulling off the 167-run chase. From 120 for 4 in 16.2 overs, he helped CSK to an above-par 167 for 6 against the Sunrisers in Dubai. His cameo 25 off 10 deliveries was the difference between victory and defeat as SRH went down by 20 runs.

It was baffling to see CSK's tactics as they continued to bat Jadeja at number 6 below an out of form Dhoni who often wasted a number of deliveries in the middle order. And yet, Jadeja came up with the goods under pressure. He smashed an unbeaten 33 off just 13 deliveries - a knock that included four towering sixes - helping CSK to a competitive 179 for 4 against the Capitals. He was the highest scorer for CSK (35 off 30 balls) again batting at number 6 in a poor effort by the team mustering just 125 for 5 against the Royals in Abu Dhabi.

In fact, Jadeja has been so brilliant in his new avatar that his strike rate (min. 120 runs) places him at number 3 (after Kieron Pollard - 200 and Hardik Pandya - 174.63) in the tournament - ahead of more accomplished names like Pooran, AB, Samson, Pant, Gayle etc.

Jadeja has scored 32 runs more in one less an innings than Dhoni in the tournament. But the real difference has been in their approach and strike rate. Dhoni has just not been there in this tournament while Jadeja has been as competitive as ever, fighting every inch and giving it all to make a difference.

Jadeja had a great tournament with the ball in IPL 2019 picking 15 wickets at a phenomenal economy rate of 6.35 - the second-best only after Rashid Khan. He has been completely out for form with his spin in IPL 2020 and has managed to pick just 5 wickets in 12 innings conceding at a rate of 9.03 runs per over.