With 7 wins from 10 matches, RCB are comfortably placed at number 3 on the points table. CSK have had a nightmare in IPL 2020 and have lost 8 of their 11 matches thus far 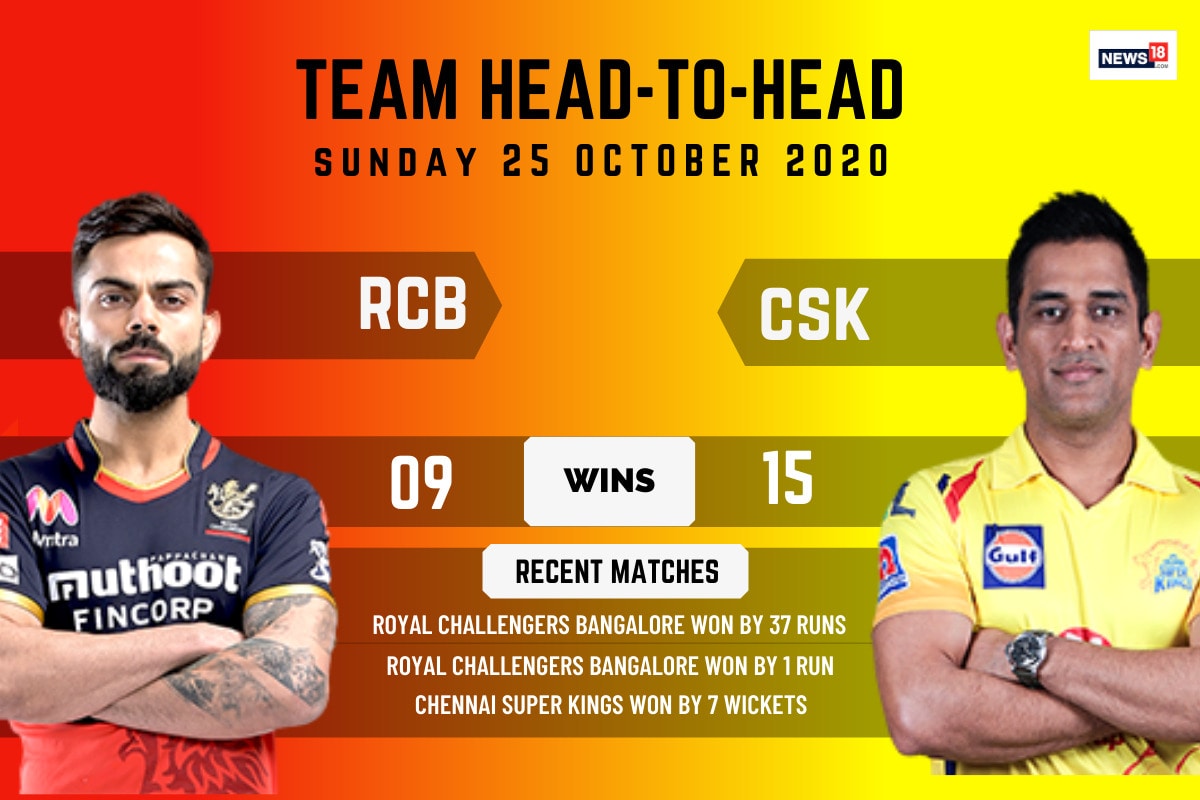 Royal Challengers Bangalore (RCB) will clash with arch-rivals Chennai Super Kings (CSK) in Dubai on the 25th of October. With 7 wins from 10 matches, RCB are comfortably placed at number 3 on the points table. CSK have had a nightmare in IPL 2020 and have lost 8 of their 11 matches thus far.

Virat Kohli's magnificent unbeaten 90 off just 52 deliveries was the highlight of RCB's 37-run win over CSK in the first match between the neighbouring rivals also in Dubai. RCB posted 169 for 4 and Chris Morris (3-19 in 4 overs) and Washington Sundar (2-16 in 3 overs) ensured that CSK were restricted to 132 for 8.

RCB have won 4 of their last 5 matches and are just a win away from securing a playoff berth. They would be keen to continue their winning ways and secure a top two finish. RCB restricted KKR to 84 for 8 in their last encounter crushing them by 8 wickets. A lot of things are clicking together for the team. The top 4 are amongst the runs. Virat Kohli is their leading run-scorer with 365 runs in 10 matches. AB de Villiers has already produced three magical innings in this IPL. Devdutt Padikkal has been impressive as an opener proving a stable foundation - he has 3 fifties in IPL 2020.

ALSO READ: IPL 2020: Rajasthan Royals vs Sunrisers Hyderabad Preview - A Do or Die Battle for Both Teams

RCB always had a great batting unit. But it is the bowling which is turning out to be the differentiator this year. Yuzvendra Chahal has been their Mr Consistent with the ball - he is their leading wicket-taker with 15 wickets at an impressive economy rate of 7.23. Chris Morris has been a great addition to the XI - he has already picked 9 wickets in 5 matches giving away just 5 runs per over. Mohammed Siraj returned with a record-breaking 3-8 in 4 overs against KKR. Washington Sundar has been their unsung hero - he has choked the batsmen in the middle overs and has an economy rate of just 5.6 in the tournament.

CSK do not have a realistic chance of making it to the playoffs any more. They have lost 8 of their 11 matches and have had the worst IPL in the history of the franchise. But they will play for pride and want to leave the tournament with at least a couple more wins. They may get back Shane Watson and give him and Faf du Plessis the license to go helter-skelter at the top. MS Dhoni and Ravindra Jadeja might bat up the order with gay abandon.

They may surprise with their bowling too. Imran Tahir could open with the new ball or even Jadeja. The latter was the second-most restrictive bowler of IPL 2019 but has gone at a rate of above 9 in IPL 2020.