WATCH: Sensational Catches and Fielding Efforts So Far In IPL 2020

The Indian Premier League is no doubt one of the most entertaining tournaments of Cricket in the star cricketers from across the world go up against each other. We have seen some extra-ordinary performance and some catches and fielding efforts by the champs. 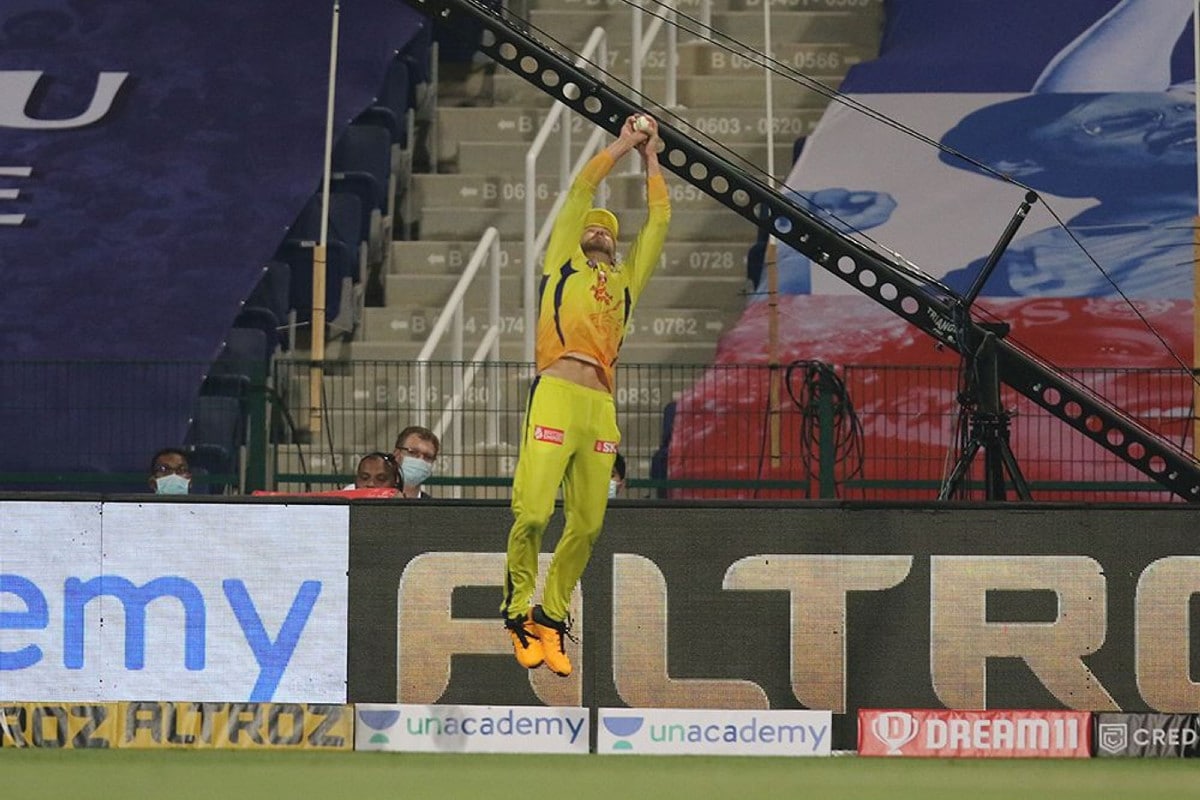 IPL 2020 has already seen quite a few spectacular fielding efforts and with the tournament not even at the halfway stage, we definitely are in for a treat. While the likes of KL Rahul, Mayank Agarwal, Sanju Samson, Rahul Tewatia have lit up the tournament with their bat and the likes of Kagiso Rabada, Jasprit Bumrah, Trent Boult have managed to hold their own with the ball, the fielding sure has taken the cake this time around, The fielding standards may have been at its highest for the teams all the time, but from the onset, this season players have shown great skills and determination, be it catching or running out a batsman.

In the match between Kolkara Knight Riders and Chennai Super Kings, the KKR number 4 batsman Sunil Narine lofted a shot towards long-on. Ravindra Jadeja was seen blazing towards the ball to take the catch and dived for the ball, he luckily threw the ball to Faf du Plessis and dismissed Narine and made this one of the best catches of this IPL season.

Kieron Pollard is known for his remarkable field presence at the boundary line. In the recent IPL match of Mumbai Indians and Rajasthan Royals, Pollard took the catch of the dangerous Jos Butter who was batting at 70 runs. The Caribbean all-rounder was seen jumping high up to take the catch, it first slipped off his hand but he immediately caught hold of it.

The 21-year old came in a substitute fielder, he was well within the inner circle of the field and took a terrific running backward catch of Mahipal Lomror.

It was the inaugural match of the IPL 2020 between CSK and MI in which the former South African skipper Faf du Plessis was seen taking 2 far-fetched catches at the boundary line to dismiss their in-form batsmen Saurabh Tiwari and Hardik Pandya which helped CSK win the match.

In the match between Royal Challengers Bangalore and Delhi Capitals, Devdutt Padikkal took a blinder at long-on at the edge of the boundary to dismiss Shreyas Iyer. Catches of this type are quite tricky because at the back of the mind, crossing the boundary line is a big threat, however Padikkal maintained his composure and took the catch quite comfortably.

While presenting the best catches, somehow great catches taken by wicket-keepers seemingly go unnoticed. The catch taken by MS Dhoni diving to his right is worth mentioning here. It was a great catch to dismiss the DC skipper Shreyas Iyer of the bowling of Sam Curran.

The catch to dismiss the aggressive and dangerous David Warner in the match between Sunrisers Hyderabad and Mumbai Indians was truly out of this world on several counts, simply because the position where Ishan Kishan took the catch was a very difficult position, short third-man, it must have come at a lightning speed. Added to this, the reflex time being very little made the catch extremely difficult.

Another outstanding catch is that of Manish Pandey. It was a diving catch at long-off which was almost out of his reach, only a very good fielder like Manish could have taken that catch.

Mohammed Shami’s first delivery in the 17th over of the MI vs KXIP match made Rohit Sharma go down the ground. Rohit tried clearing the boundary but a stunning duo effort catch by Maxwell and Neesham at the boundary line dismissed the MI skipper.

The young Kamlesh Nagarkoti ran in from long off and held on to the ball in a showcasing his supreme athletic abilities and also fielding skills. He almost pulled off a Mohammad Kaif on Hemang Badani, leaping full length in front of his U-19 teammate Shivam Mavi, an excellent fielder in his own rights, and holding on to a tough catch. Mavi though pulled out in time to let Nagarkoti complete the catch.

How useful is physical fitness and athletics is shown by the acrobatic effort of Nicholas Pooran who saved a certain six from a hit by Sanju Samson, leave apart the extreme commitment, it was just unbelievable to see how much the game has changed in the last one decade.

KXIP's Sheldon Cottrell committed himself fully to stop a boundary