An unbelievable, thrilling and nail-biting end to another great week in the Indian Premier League (IPL) 2020 in the UAE. Three Super Overs on a Super Sunday - it could not have got any better!

An unbelievable, thrilling and nail-biting end to another great week in the Indian Premier League (IPL) 2020 in the UAE. Three Super Overs on a Super Sunday - it could not have got any better! Delhi Capitals (DC) and Mumbai Indians (MI) appear to be the firm favourites and occupy the number 1 and 2 positions four weeks into the tournament. We look at the trends and patterns that have emerged or got broken this week, players and teams who have stood out and some other interesting observations.

GETTING TIGHT IN THE LOWER HALF

There are now three clear clusters in IPL 2020. DC, with 7 wins from 9 matches and MI and RCB with 6 wins each from 9 matches belong to Cluster 1. KKR are at number 4 on the points table - with 5 wins and 4 losses from 9 matches, they are alone in Cluster 2. The last cluster is where all the action is with four teams tied together on the same number of points - SRH, KXIP, CSK and RR, have all lost 6 of their 9 matches. Cluster 3 could make the last phase of the group matches very interesting. Even if we assume that the three teams in Cluster 1 will be difficult to dislodge, KKR haven’t been at their best and can be beaten.

BAT-FIRST NOT AN ADVANTAGE THIS WEEK 18th of October, 2020 will go down as a historic day for the IPL! For the first time in the tournament’s history, in 13 editions, a double-header day was decided by two Super Overs. KKR and SRH ended with the same score in Abu Dhabi and went into the one-over eliminator. More drama was in store in Dubai where not only did the match between KXIP and MI end in a tie but Super Over 1 also could not decide a winner with the teams scoring the same number of runs. It was finally decided by Super Over 2. This meant that the Super Sunday saw 3 Super Overs! 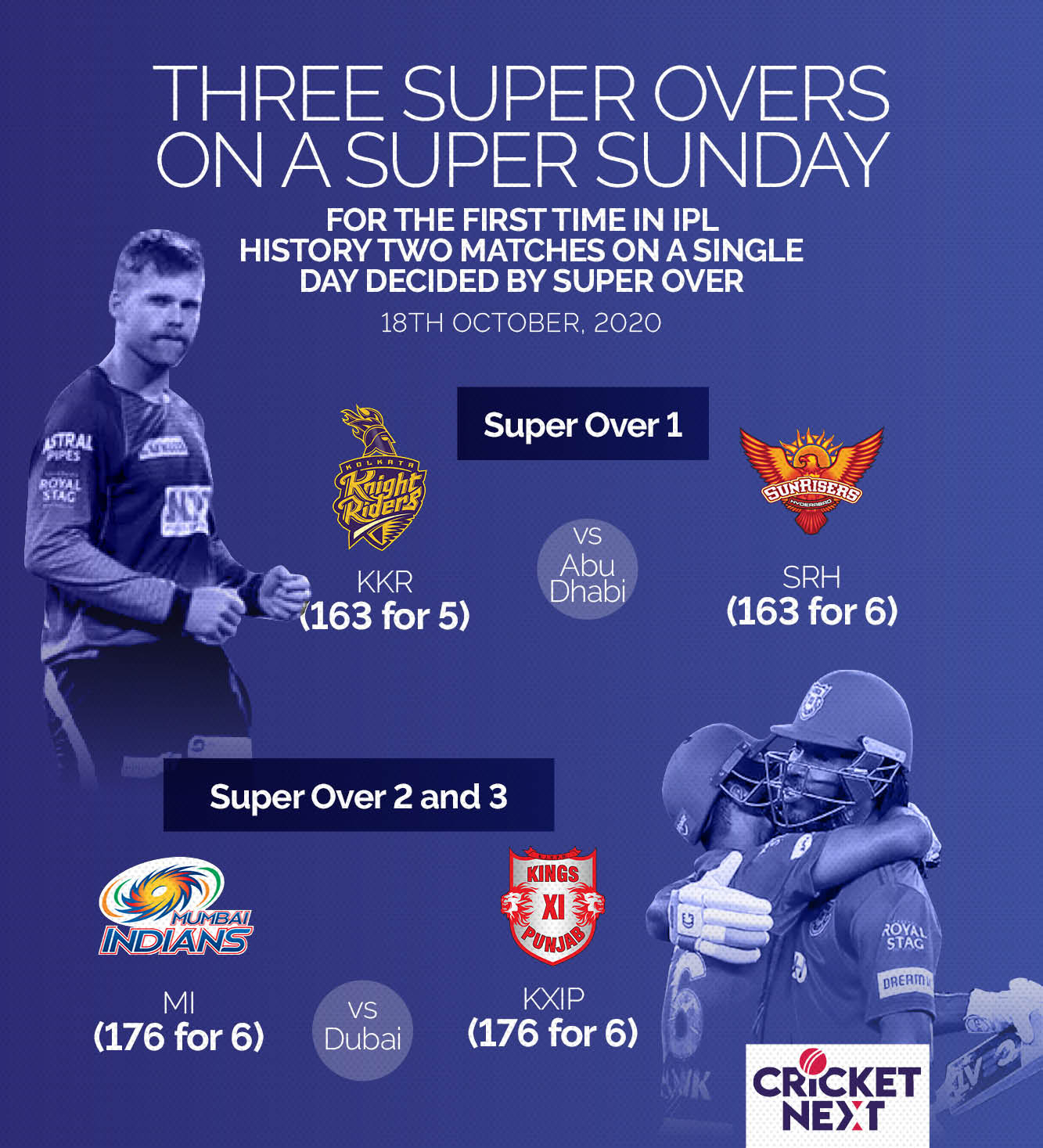 Shikhar Dhawan turned from accumulator to aggressor this week - this new avatar saw him produce two-match winning knocks for the Capitals. He scored 57 off 33 balls as DC beat RR by 13 runs in Dubai. He followed this with the performance of his T20 career recording a majestic unbeaten 101 off just 58 deliveries as DC chased down CSK’s 179 for 4 with 5 wickets in hand. KL Rahul gave two Player of the Match performances this week - his unbeaten 49-ball 61 helped KXIP chase down RCB’s 171 off the last ball of the match. He then scored 77 off just 51 deliveries in a 177-run chase against MI in Dubai - the match ended in a tie and was ultimately decided by two Super Overs!

Rahul is the highest run-getter of IPL 2020 with a staggering 525 runs from 9 matches. He has been exceptionally consistent and has already registered 5 fifties and a hundred.

Jasprit Bumrah had a slow start to IPL 2020 but has now returned to his best in the tournament. He was the most restrictive pace bowler of the match while also getting the wicket of the dangerous, Andre Russell against KKR and returned with 3-24 in 4 overs and 2-5 in the Super Over 1 against Kings XI Punjab in Dubai.

Overall, it was a tough few days for the Sunrisers and the Royals who lost both their matches this week. Kings XI and the Capitals had the best result this week with 2 wins from 2 matches.