IPL 2020: Team of the Tournament - MI Dominate, No Place for CSK and KKR Players

The team has 5 players from MI, two from RR and one each from RCB, DC, SRH and KXIP. 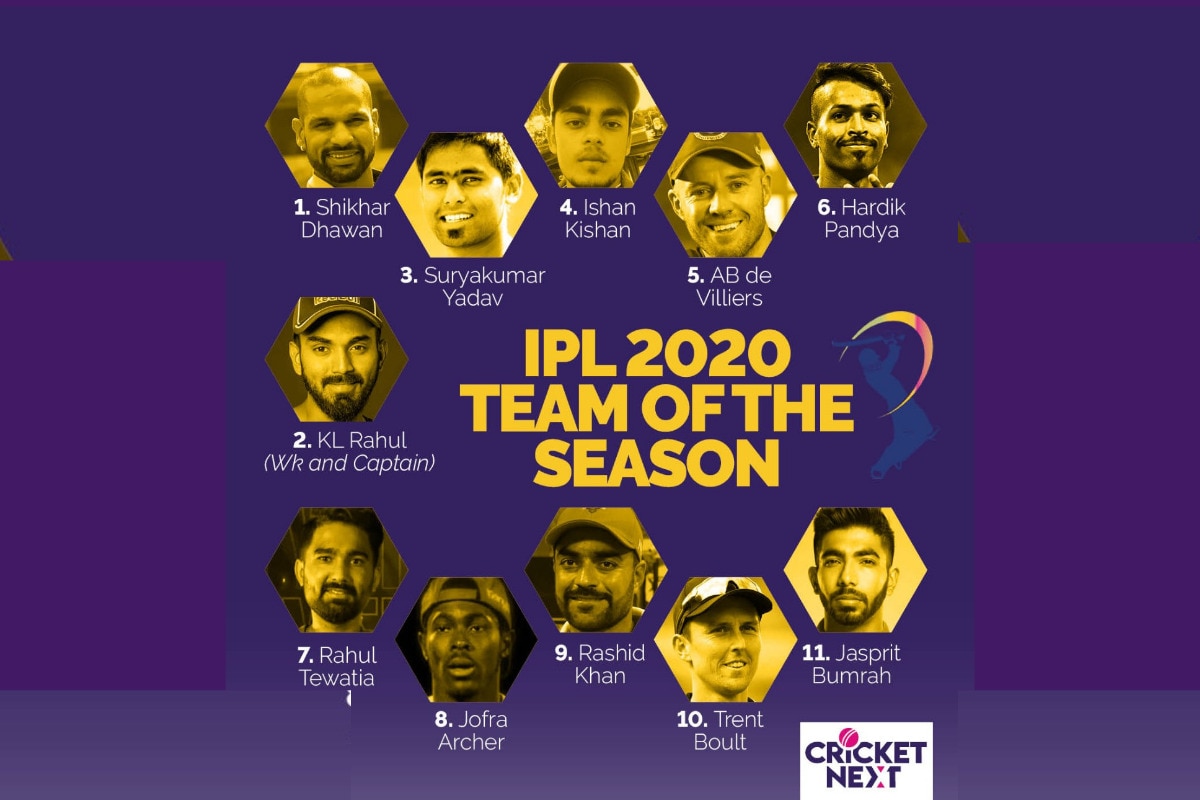 Mumbai Indians (MI) won their 5th IPL title defeating Delhi Capitals (DC) in the final of the Indian Premier League (IPL) 2020 in Dubai on the 10th of November. There were some great performances throughout the season. We look at the players who stood out and form an IPL XI of the season.

The team has 5 players from MI, two from RR and one each from RCB, DC, SRH and KXIP.

The two highest run-getters of the tournament, KL Rahul of Kings XI Punjab and Shikhar Dhawan of Delhi Capitals, make for an ideal left-right combination at the top of the order. KL Rahul aggregated 670 runs in 14 innings at an average of 55.83 and strike rate of 129.34 this season. He is the highest scorer (combined) in the last three editions of the IPL.

Dhawan piled on 618 runs in 17 matches and was the only batsman to register two hundreds in the tournament. He transformed his fortunes and of the team's when he turned from anchor to aggressor mid-way into the group-stages - from a strike rate of 122.22 in his first 6 matches, the southpaw scored at a phenomenal rate of 152.35 in the next 11 matches. Suryakumar Yadav and Ishan Kishan walk in to the XI and occupy the number 3 and 4 positions in the IPL 2020 XI. Yadav has been MI's Mr Dependable over the last few editions. He was their second-highest run-getter in IPL 2019 and the highest run-getter in 2018. The striking feature about Yadav's batting this year was his ability to score quickly keeping the tempo and momentum of the innings - he aggregated 480 runs in 15 innings at a strike rate of 145.01 in the season.

Ishan Kishan exceeded all expectations this year and was MI's highest scorer of the season. The left-hander aggregated 516 runs in 13 innings at a high strike rate of 145.76. His standout innings was also his first of the season - coming in at 16 for 2, he blasted 99 off just 58 deliveries against RCB in Dubai.

AB de Villiers was RCB's playmaker in the middle order. He gave 4 outstanding performances with the bat, all resulting in his team's victory. AB's strike rate of 158.74 is the highest amongst all the batsmen who scored in excess of 400 runs in the tournament.

Hardik Pandya had the second-highest strike rate in the tournament (min. runs 120) of 178.98. He blasted a 21-ball 60 against the Royals in Abu Dhabi but his most significant performance was the 14-ball 37 against the Capitals in the Qualifier 1 in Dubai.

Rahul Tewatia played a stellar role with the bat and ball and was the best all-rounder in the first half of the tournament. He played the role of the finisher with a special ability to hit sixes. He was RR's joint second-highest wicket-taker too with 10 wickets but more impressive was his economy rate of 7.08.

Jofra Archer was RR's trump card with the ball in the group stages of the tournament. He bowled with fire and pace and picked 20 wickets in 14 matches. Archer was also very difficult to get away and conceded at a rate of just 6.55 runs per over.

Rashid Khan was outstanding for SRH in the middle overs - not only did he choke the opposition batsmen but also picked crucial wickets. Rashid had a stunning economy rate of just 5.37 - the best in the tournament.

Trent Boult and Jasprit Bumrah were outstanding with the new ball for MI and got an early breakthrough in as many as 12 of the 15 matches they played this season. They combined to take 52 wickets between them and had a knack of picking top quality opposition wickets - 4 of every 5 wickets they took in IPL 2020 were of a top 6 batsman! Boult also raised his game in the big matches - he was brilliant in both the Qualifier 1 and Final showcasing a special quality of rising to the occasion in the matches that mattered the most. While Boult was the Player of the Match in the Final, Bumrah (4-14 in 4 overs) was outstanding in the Qualifier 1.