IPL 2020: Ten Highest Individual Scores in the History of the Tournament

With the 13th edition of the tournament set to be played in a month, we look back at the ten highest individual scores in the IPL.

The Indian Premier League (IPL) redefined not only set the template for T20 leagues to ape in the future, but the quality of cricket on display also helped draw fans in droves.

One of the main reasons the shortest format of the game appeals to the masses is its slap-dash nature. As such, it is a format where more-so than ever before, batsmen have thrived.

With the 13th edition of the tournament set to be played in a month, we look back at the ten highest individual scores in the IPL. The self-proclaimed ‘Universe Boss’ was always well suited to T20 cricket and he showed just how destructive he could be when he smashed the highest score in the history of the IPL. Opening the batting for Royal Challengers Bangalore, Gayle made the Warriors’ bowling attack look hapless as he single-handedly took them to the cleaners. His impressive score came in just 66 balls, meaning he scored at a strike-rate of 265.15. It also meant there was little pressure on anyone else in the team to make runs; the next highest scorer in that match for RCB was Tillakaratne Dilshan with 33. It came as no surprise that RCB went on to register a massive 130-run victory. The first-ever IPL match is one unlikely to be forgotten by anyone who witnessed it, thanks largely to former New Zealand skipper McCullum. Opening the batting alongside Sourav Ganguly for Kolkata Knight Riders as they were put in to bat first, McCullum showed the world not only just how destructive a batsman he could be but also the potential of the IPL. On a batting friendly track in Bengaluru, McCullum made power hitting look effortless. The Kiwi opener’s knock not only made him an overnight star but also got the cash-rich league off to the perfect start. As such, this is a knock that is forever etched in IPL lore. KKR would go on to win the match by 140 runs. 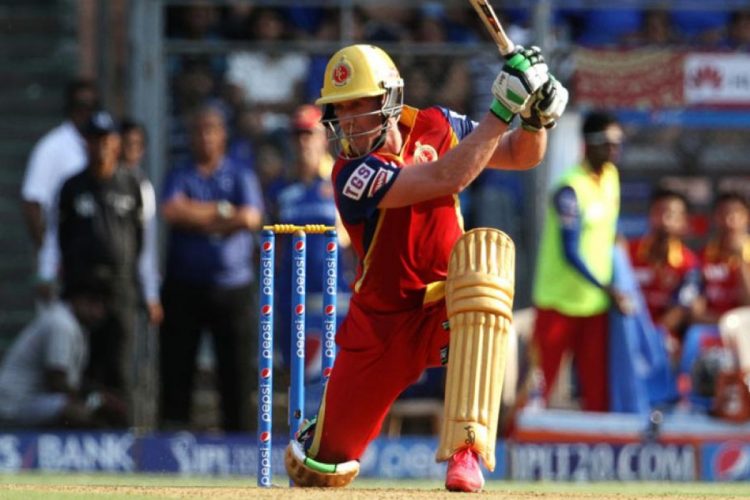 Mr. 360 is another player who excelled greatly in T20 cricket thanks in large part to his improvisational ability as well as the knack of hitting big shots at will. This match against Mumbai started poorly as RCB had lost Chris Gayle when ABD came to the crease. The former South Africa skipper would combine with franchise skipper Virat Kohli and put together a 215-run stand for the second wicket. Kohli scored a well-made 82* but it was De Villiers who stole the show, smashing 19 fours and 4 sixes as RCB went on to score 235-1 in their 20 overs. A spirited fightback from MI in the second innings wasn’t enough to prevent RCB from sealing the win. Pant’s inconsistencies during his international career have opened him up to some harsh criticism but innings like these make it easy to remember why the Delhi wicketkeeper-batsman was so highly rated when he first burst onto the scene. Delhi Daredevils were in a spot of bother 43-3 when Pant walked in to bat and proceeded to single-handedly demolish a bowling line-up that had the likes of Bhuvneshwar Kumar, Siddarth Kaul, Rashid Khan and Shakib al Hasan. His power-packed innings contained 15 fours and 7 sixes, helping Delhi set a respectable total of 187-5. Unfortunately, the innings is somewhat forgotten because SRH ran out winners in this encounter. The Chennai Super Kings opener was known more for his ability to construct an innings from the top of the order but on his day, he too could play destructive knocks. Never was this more evident than in this 2010 match against Rajasthan Royals where he smacked 8 fours and 11 sixes en route to a fine century. He almost batted through the innings but was finally dismissed with 2 balls to spare. Nevertheless, his free-wheeling innings helped CSK set an imposing target of 246-5 in their 20 overs. RR for their part fought back valiantly but could manage only 223-5 in return which meant that Vijay’s knock didn’t go in vain. Another player who was well-suited to the shortest format of the game, Warner had by this point captained Sunrisers Hyderabad to their maiden IPL crown. The Australian opener has continued to show his class thereafter, most notably against KKR when he plundered an unbeaten ton after being put in to bat first. Warner was in his element from early on and none of the bowler’s were spared his wrath, smashing 10 fours and 8 sixes as SRH scored 209-3. KKR’s usual strategy of bowling tight and chasing down small targets was blown out of the water and SRH eventually celebrated a victory that was created thanks largely to the efforts of their irrepressible captain. Sehwag was a legend of Indian cricket thanks largely to his hard-hitting ability and he could always be counted on to provide the fireworks atop the order. He did just that for Kings XI Punjab against CSK in this 2014 encounter. Sehwag, normally more known for quickfire knocks, batted deep until the 19th over and was rewarded with his highest IPL score in the process. His 122 included 12 fours and 8 sixes and a top-notch bowling unit was made to look ordinary on the day by one of Indian cricket’s finest openers. CSK fought back valiantly in the second innings, thanks largely to a Suresh Raina half-century, but only managed 202 to KXIP’s 227. Arguably the only person on this list who was not a household name prior to this knock, Valthaty – who has never represented India internationally – made himself the talk of the cricket world in India with just one innings. Chasing 189 to win against CSK, Kings XI Punjab needed a good start from their openers and they got it courtesy of Valthaty. His unbeaten knock included 19 fours and 2 sixes and his explosive innings ensured that none of the other KXIP batsmen had much to do to finish the match thereafter. They would go on to register a comfortable six-wicket win, something that would not have been possible without Valthaty’s valuable century. Watson’s power hitting made him a consistent IPL performer for years but the legendary Australian all-rounder proved that class was indeed permanent in the final of the 2018 edition of the tournament. CSK were returning to the tournament after a two-year absence and had a chance to cap a fairytale run with a win in the final. Chasing 179 was never going to be an easy task yet a power-packed knock from Watson that included 11 fours and 8 sixes meant that the result never seemed in doubt for the Men in Yellow. They would eventually chase down the target with 9 balls to spare and the fairytale comeback was complete. An oft-forgotten knock due to the fact that the Deccan Chargers had a very poor run in the first season of the IPL, Symonds showed the world why he was regarded as one of the finest proponents of white-ball cricket at the time. The all-rounder smashed 11 fours and 7 sixes against RR en route to an unbeaten ton that helped his side score an imposing total of 214-5 in the first innings. Perhaps another reason the knock remains forgotten by many was that the Shane Warne-led RR, who would go on to win the inaugural tournament, actually pulled off what was an unlikely victory thanks to half-centuries from Graeme Smith and Yusuf Pathan. ​