The west indies cricketer Sunil Narine representing the Kolkata Knight Riders in the IPL has shown his magic with the ball as well as the ball over the years. But this season seems to be a bit disappointing for the KKR performer. Sunil Narine is one of the most sought after players in the world in T20 cricket. A great spinner who has single-handedly won many a match for his team with his crafty off-spin and also a talented and explosive top-order batsman. But the West Indian cricketer hasn’t been in great form in IPL 2020. He has looked out of sorts with the ball and is completely out of his zone with the bat.

Narine has picked just two wickets in 4 matches with the ball at an average of 59.5 and strike rate of 42 in the tournament thus far. He has neither threatened to pick wickets nor has he been very restrictive. He has an economy rate of 8.5 which is higher than the rate of every other KKR bowler (min. 8 overs) except Pat Cummins. Andre Russell has an economy rate of 7.75, Varun Chakravarthy (8.25), Shivam Mavi (8.23) and Kuldeep Yadav (8.22).

Barring his performance in KKR’s first match against MI in Abu Dhabi where he conceded just 21 runs in his 4 overs, Narine has been expensive in all the other matches. He went at 7.75 per over in a low-scoring match against SRH, 10 per over against RR and 13 per over (26 in 2 overs) against DC. 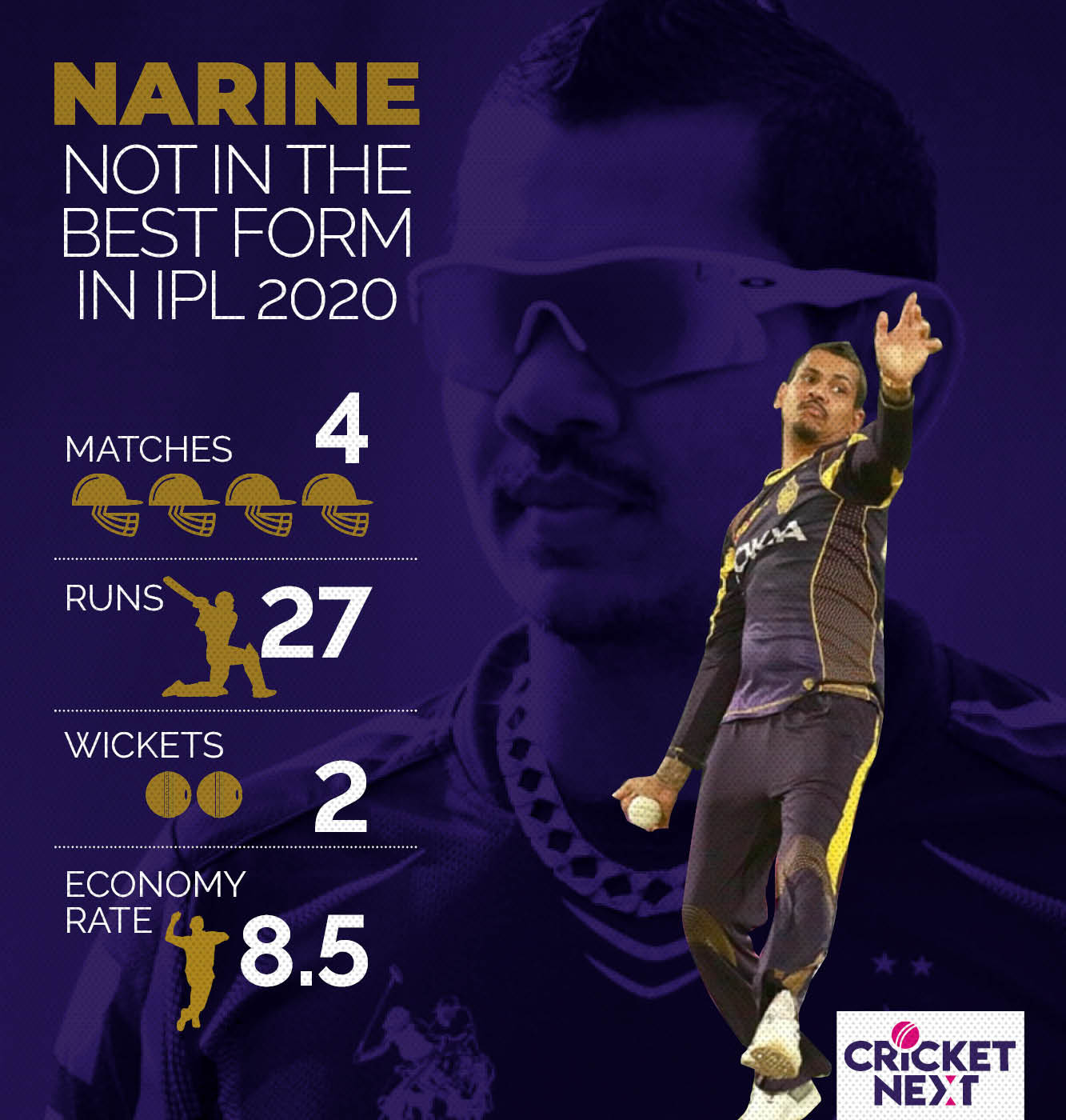 Narine, who has only represented Kolkata Knight Riders (KKR) in the IPL, has a great record with the franchise picking 124 wickets in 113 bowling innings at 23.9 apiece. He is the third-highest overseas wicket-taker in IPL history after Lasith Malinga and Dwayne Bravo. His economy rate of 6.73 is also amongst the best of all-time! He was KKR’s highest wicket-taker, both in 2012 and 2014, when they went on to win the coveted league.

Narine wasn’t amongst the wickets even for Trinbago Knight Riders, who went on to win the CPL 2020. But he was very restrictive with an economy rate of just 4.55.

The worry for KKR is that Narine has been unable to control the flow of runs in IPL 2020.

To add to his woes with the ball, is his indifferent form with the bat. He has just managed a paltry 27 runs in 4 innings at a poor strike rate of 87.09.

Chasing 196 against MI, Narine could not get going and just managed to score 9 off 10 deliveries opening the innings for KKR. He faced two deliveries before being dismissed for a duck against SRH. He got his first run off the 7th delivery against RR – not able to force the issue in the power-play and was finally dismissed for an unsatisfactory 15 off 14 balls. It did not get any better against DC in Sharjah where chasing a mammoth 228, even on a ground with smaller dimensions, Narine just could not get going and was cleaned up for 3 off 5 deliveries.

Neither is Narine playing any innings of value nor providing those cameos at the top for KKR .

Clearly, Narine of IPL 2020 is a far cry from the great T20 all-rounder he has been all these years.

Will KKR drop him for a few matches? Will the old Narine return?