In this piece we look at some stats which define the performance of Kolkata Knight Riders (KKR) – who had a tough start in the initial few seasons but showed their class in 2012 and 2014 by winning the tournament. In this piece we look at some stats which define the performance of Kolkata Knight Riders (KKR) – who had a tough start in the initial few seasons but showed their class in 2012 and 2014 by winning the tournament.

Manvinder Bisla was the star of the chase with a 48-ball 89. KKR pulled off another splendid chase in the final against Kings XI Punjab in

Bengaluru in 2014. They reached their target of 200 with three balls to spare and three wickets in hand. Manish Pandey produced the match-winning performance with the bat with a 50-ball 94. Skipper, Gautam Gambhir was the highest run-getter for KKR and the second- highest overall in the victorious campaign in 2012. He aggregated 590 runs in 17 innings. It is the second-highest aggregate for KKR in a season.

660: Highest Aggregate Runs in a Season for KKR – Robin Uthappa

Robin Uthappa was the star batsman in the victorious 2014 edition. He was the leading run-getter (amongst all teams) with 660 runs in 16 matches in the season.

Narine was the highest wicket-taker for KKR (and the second-highest overall) in both 2012 and 2014 playing the pivotal role with the ball in their two championship victories. 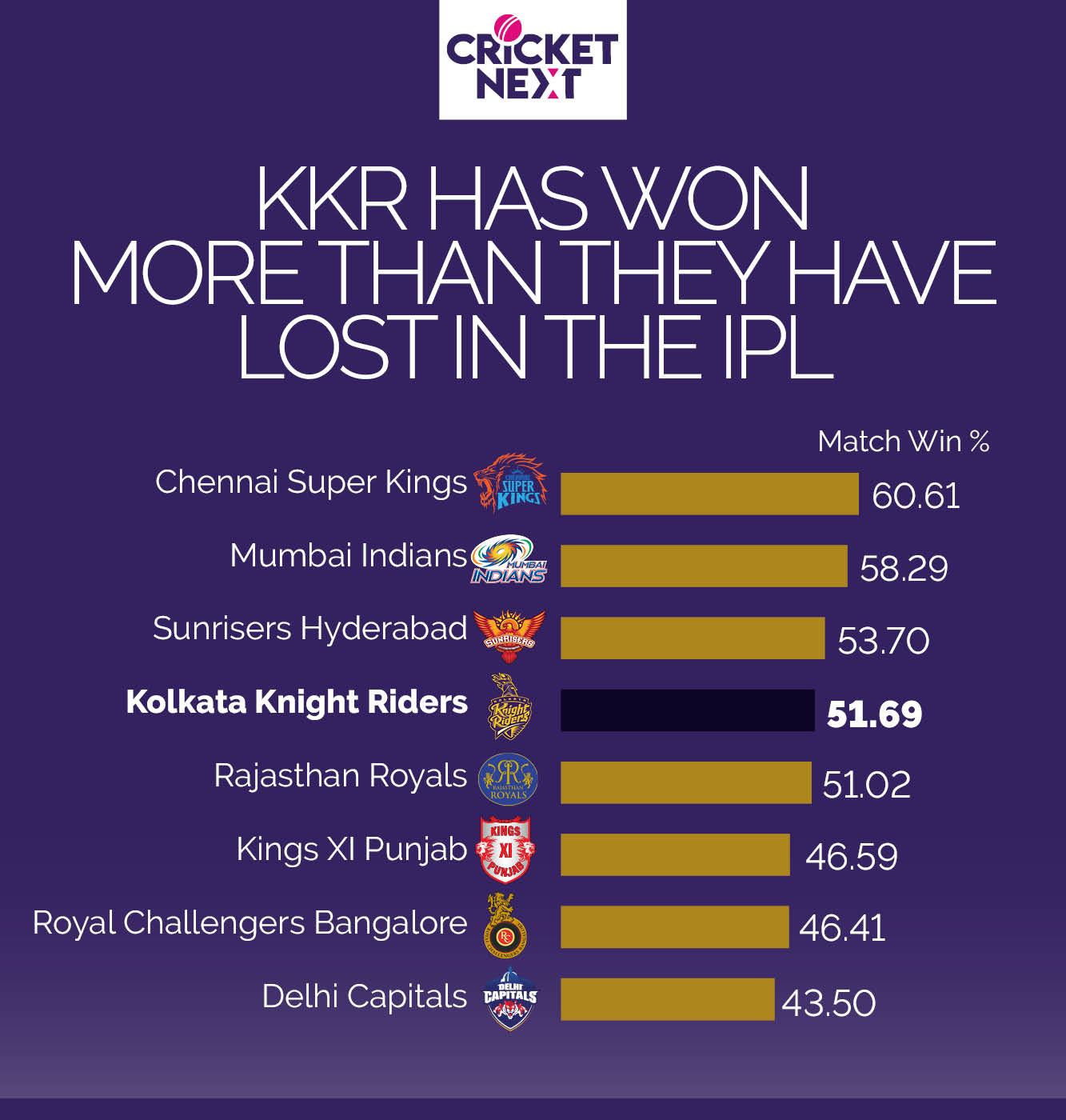 KKR have beaten KXIP in 17 of their 25 encounters against them.

24%: Lowest Win Percentage against a team (vs MI)

KKR had their worst season in 2009 - they lost 10 of their 14 matches in the edition finishing last in the points table.

Sunil Narine’s 36-ball 75 and Dinesh Karthik’s 23-ball 50 took KKR to their highest score in the IPL. It is the fourth highest total by any team in the IPL.

1 & 1: Lowest Margin of Victory by Wickets and Balls Remaining (vs Kings XI in Kolkata in 2015) 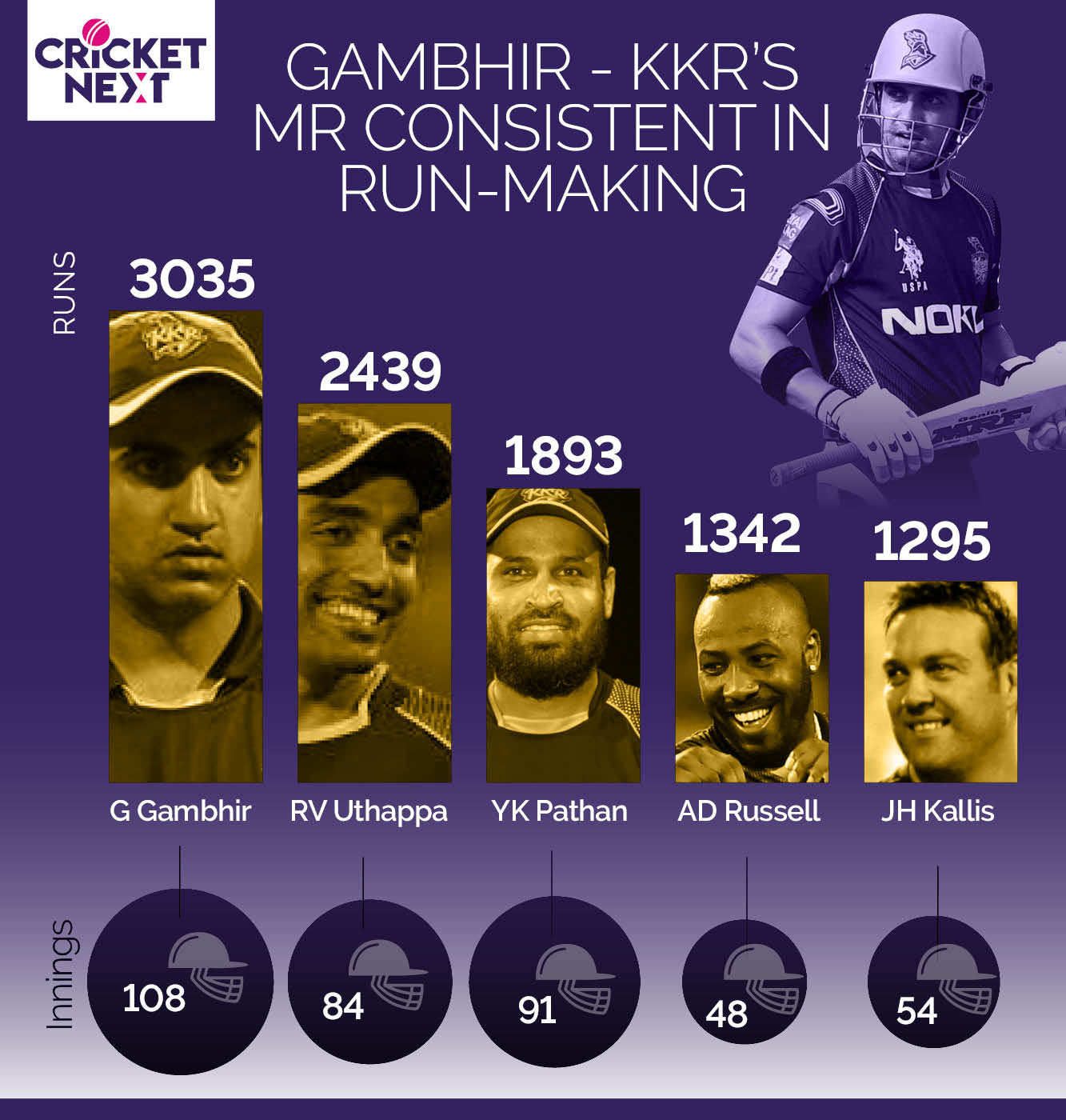 158*: The Only Hundred for KKR in the IPL – Brendon McCullum

Brendon McCullum blasted an unbeaten 158 off just 73 deliveries in the very first match of the IPL against RCB in Bengaluru in 2008. It remains the only hundred for KKR in the IPL. Russell is probably the most destructive batsman in the history of the IPL! Two of his 15 200-plus strike rate innings had a strike rate of in excess of 300 and 4 between 250 and 300.

3/5: Number of Times Gambhir Featured in Five Highest Runs Tallies for KKR in a Season The second-highest, Piyush Chawla is at a distant 66.

Slow left-arm orthodox bowler played 33 matches for KKR between 2008 and 2013. Sunil Narine has the second-best economy rate of 6.67.

49: KKR Dismissed RCB for the Lowest Total in IPL History

KKR bowled out RCB for 49 at the Eden Gardens in 2017 – it remains the lowest total in IPL history!

184*: Highest Partnership for any Wicket – Gautam Gambhir and Chris Lynn (vs Gujarat Lions in Rajkot in 2017)

It is the second-highest partnership for the opening-wicket in IPL history!

108: Most Matches as Captain – Gautam Gambhir

Overall (including captaining the Daredevils), Gambhir has led in 129 matches in the IPL – only the second-highest after MS Dhoni (174).