In this piece we look at some stats which define the performance of Rajasthan Royals (RR) – who under Shane Warne’s inspirational leadership – won the inaugural season of the IPL in 2008, went through a tough phase thereafter before again constantly punching above their weight in the last few editions.

In this piece we look at some stats which define the performance of Rajasthan Royals (RR) – who under Shane Warne’s inspirational leadership – won the inaugural season of the IPL in 2008, went through a tough phase thereafter before again constantly punching above their weight in the last few editions.

RR won the inaugural edition of the IPL in 2008 beating CSK in the final with a thrilling victory off the last ball of the match!

They had finished as table-toppers in the group stage winning 11 of their 14 matches. Watson (RR) is the third player to win this award twice along with Sunil Narine and Andre Russell (both KKR on both occasions).

Watson gave two outstanding world-class all-round performances – in 2008 and 2013. He was RR’s highest run-getter in their victorious campaign in 2008 scoring 472 runs in 15 matches at a stunning strike rate of 151.76. He also picked 17 wickets at an economy rate of just over 7.

RR has won more than they have lost in the IPL. Considering the fact that they haven’t always had the big names in their squad this is a good achievement suggesting that they have always punched above their weight. RR has a woeful record against CSK having lost 14 of the 21 matches between the two sides.

RR won 13 (including the semi-final and final) of the 16 matches they played in the 2008 edition.

RR had their worst season in the last edition of the IPL in which they won just 5 of their 14 matches.

It is the second-lowest total in IPL history after RCB’s 49. 105*: Highest Individual Score in a Match – Ajinkya Rahane (vs Delhi Capitals in Jaipur in 2019)

Chris Morris blasted an unbeaten 34 off just 11 deliveries against SRH at the Brabourne Stadium in 2015.

It is the second-highest on both counts for RR in their IPL history making Watson one of the premier all-rounders of the tournament. 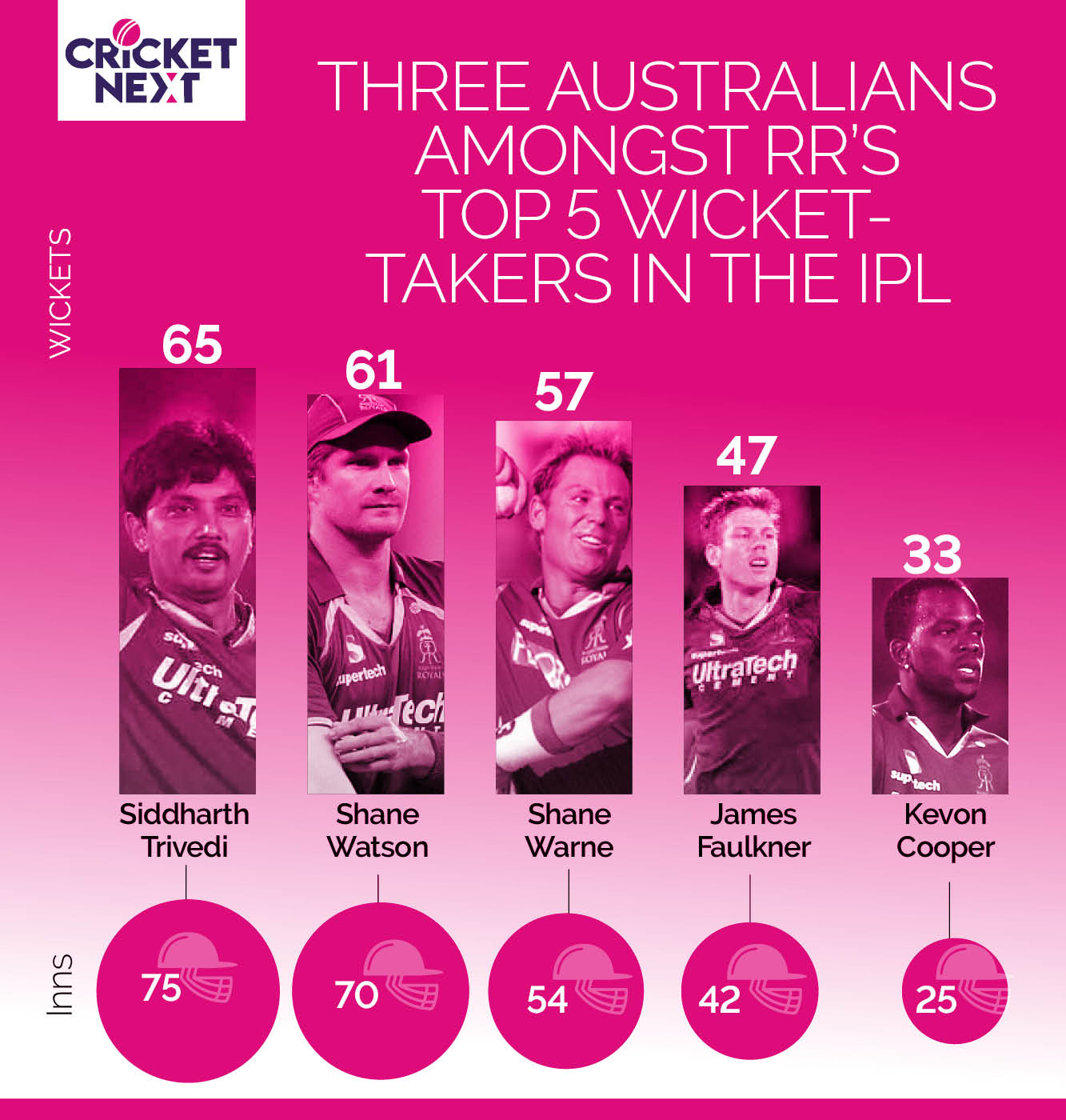 Right-arm pacer, Siddharth Trivedi is the highest wicket-taker for RR in the IPL. He has picked 65 wickets in 75 innings at an economy rate of 7.58.

The leg-spinner, Shreyas Gopal was RR’s leading wicket-taker and the fourth-highest overall of the 2019 edition in which he picked 20 wickets in 14 matches at an economy of 7.22.

These are the second-best bowling figures in IPL history!

Tanvir was the highest wicket-taker in the inaugural season picking 22 wickets in just 11 matches at an excellent economy rate of 6.46.

144: Highest Partnership for any Wicket – Ajinkya Rahane and Shane Watson (vs CSK in Ahmedabad in 2015)

It is the fifth-highest partnership in IPL history!

55: Most Matches as Captain – Shane Warne

Warne led RR to victory in 30 of the 55 matches he captained. And more significantly to the title in 2008.

AN ALL TIME RR XI: